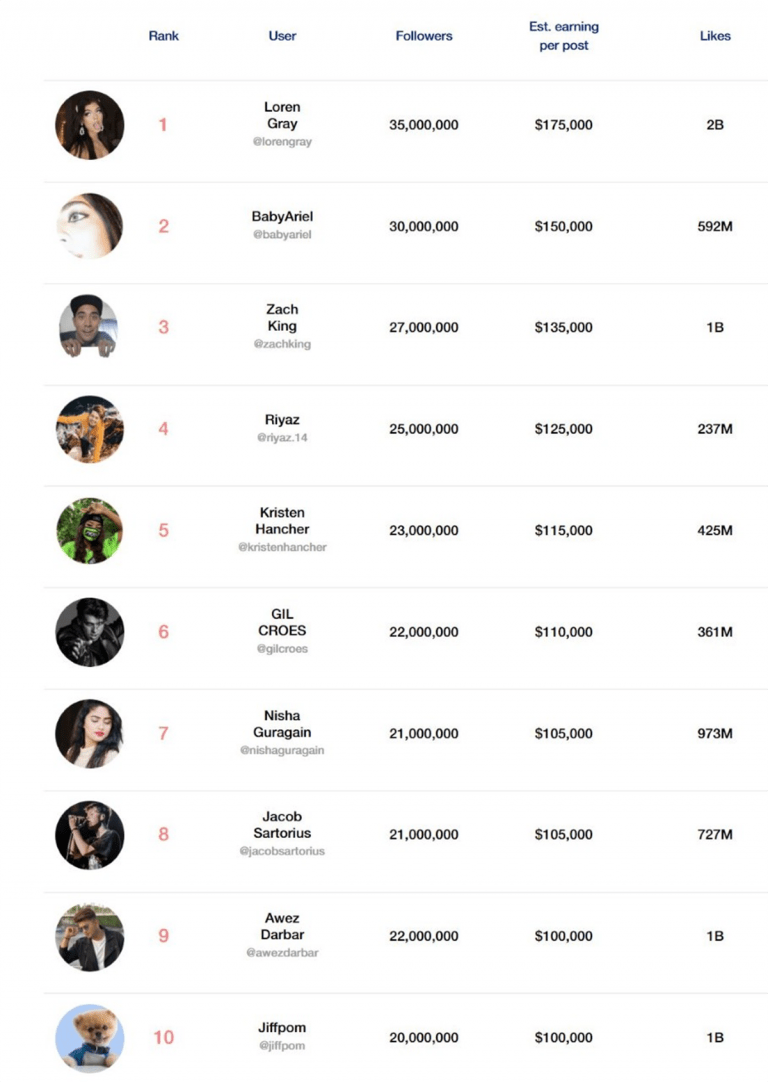 dA new report has revealed how much the richest tiktok stars are earning per post and how much they’ll be earning in a years’ time.

Whilst the world has been oblivious, the app TikTok has risen sharply in popularity in the last year, now boasting over 1.5 Billion users worldwide.1

Dominated by teenagers and tweens, many have shot to fame on this short video app. But just how much money could TikTok celebrities and influencers be earning?

A new report by Online Casinos has revealed the richest TikTok stars now, and how this will change over the next 12 months. This data was taken December 2019.

The highest potential earner on TikTok is Loren Gray, who could make up to $175, 000 per sponsored post. That’s 265 times the weekly average salary2, for one 60 second video.

The young star has 35 million followers on TikTok, posting daily. She was born in Pottstown, Pennsylvania, but moved to LA after being bullied following her growing fame. Loren is a singer and social star, first coming to fame through her musical.ly account, lorengray. She is now also an actress, model and dancer.

The top ten influencers can be seen below:

The top ten wealthiest stars in the next year

Aashika Bhatia is going to have the most fans on TikTok in a years’ time, and she’ll be worth $973,720 per sponsored post.

Aashika Bhatia is an actress from India, starting her on-screen career playing young ‘Meera’ in the TV show, Meera in 2009. In 2015, she made her Bollywood debut with Prem Ratan Dhan Payo. She posts a variety of videos, from lip syncing to skits, with her popularity on the app set to skyrocket.

The top richest tiktok stars of the future can be seen below:

Full details on the report can be seen at: https://www.onlinecasinos.co.uk/tiktok-rich-list.htm

Estimated price per posts was calculated using https://realtimetiktok.com/ - it is estimated that profiles can get paid up to $0.005 per follower.

Future followers  for the richest tiktok stars have been calculated via https://cloutmeter.com/

OnlineCasinos.co.uk is a gambling reviews website devoted to covering the UK’s top betting sites. Our UK-based team of gambling enthusiasts write about the best online casinos, gambling platforms, and sports betting sites – our content is written by players and for players.