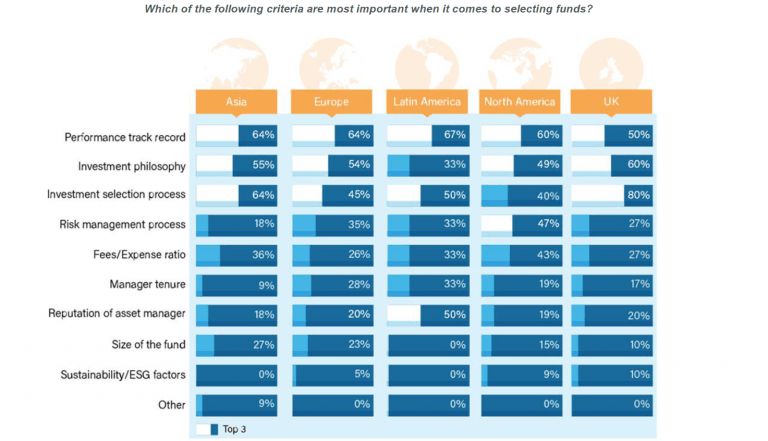 A CoreData Research global study of 200 professional fund buyers found only 7% point to ESG/sustainability factors as one of the most important fund selection drivers.

Professional buyers in the UK (10%) and North America (9%) attach the most weight to ESG. But no respondents in Asia or Latin America say ESG is a prime selection driver, with just 5% of buyers in Europe citing it as a major influence.

“The surprisingly small role assigned to ESG in the fund selection process may reflect difficulties evaluating the sustainable credentials of funds due to a lack of transparency and reported data,” said Craig Phillips, head of International, CoreData Research. “While the market has seen a proliferation of ESG funds, there are growing concerns about so-called greenwashing.”

Performance track record, cited by six in 10 (60%) respondents, is seen as the most important driver when selecting funds. Professional buyers in Latin America (67%), Europe (64%) and Asia (64%) regard past performance as particularly important, while those in the UK (50%) assign it the least significance.

After performance track record, global buyers point to the investment philosophy (53%) and investment selection process (51%) as the next most important fund selection drivers. But far fewer buyers cite the influence of manager tenure (23%), asset manager reputation (21%) and fund size (18%).

“This shows how professional buyers are looking beyond those factors associated with the manager and are instead focusing on fund-specific dynamics,” added Phillips. “They are basing decisions around the particular investment approach and style and how successful it has been rather than the manager’s reputation and tenure.”

For further information, please contact Will Roberts at CoreData Research UK at will.roberts@coredataresearch.com