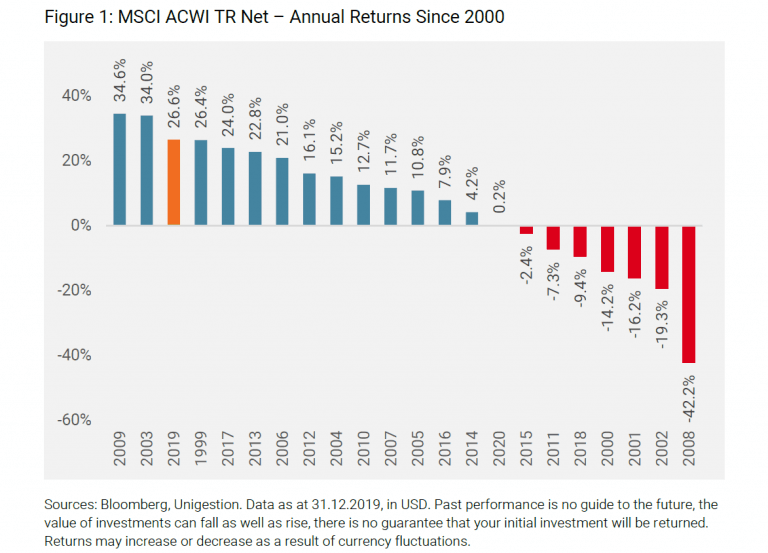 2019 was a very strong year for equity markets, with the MSCI ACWI TR Net index delivering its third best return of the last 20 years, as shown in Figure 1. In addition to an extremely bullish environment, we also witnessed extreme style dispersion. Both high and low risk strategies tended to perform well in 2019. In this paper we examine:

Key drivers of equity returns in 2019

In response to the volatility seen in Q4 2018, key central banks adopted a much more supportive stance for global equity markets, highlighted by a series of rate cuts by the US Federal Reserve and a renewed dovish stance from the European Central Bank. This drove the performance of risky assets and gave an advantage to the riskiest stocks, irrespective of their valuations (Figure 2).

This value-agnostic market was particularly in evidence from a sector perspective, as sectors with the highest growth expectations considerably outperformed those with a more stable growth profile (Figure 3).

Given that the outperforming sectors included some of the largest names in the benchmark in terms of market capitalisation, we also saw this growth effect drive the outperformance of cap-weighted versus equally weighted indices (Figure 4). A synchronous outperformance of large caps across all markets is a rare occurrence and usually signals flows into passive equities from investors with high risk appetite who have temporarily forgotten about the diversification opportunities offered by mid and small caps.

This large-cap effect was even more obvious when looking at the contribution of the four largest stocks to the performance of their corresponding market cap-weighted indices in 2019.

In our opinion, investors have been excessively optimistic about the many sources of risk that still prevail today, particularly on the geopolitical side, as the recent events in the Middle East have shown. While equities should continue to perform well in the current low interest rate environment, a rally whose sole basis was multiple expansion signals an increase in future volatility and a potential for mean reversion.

Behaviour of low risk strategies in 2019

Given this strong bull market environment, one would have expected a generalised underperformance of low risk strategies. In fact, the low risk factor is pretty predictable in terms of its performance pattern depending on the market environment. As shown in Figure 6, there is a clear pattern of returns for the low risk factor depending on the overall market’s returns. In markets posting annual returns above 20%, low risk strategies tend to underperform markedly. 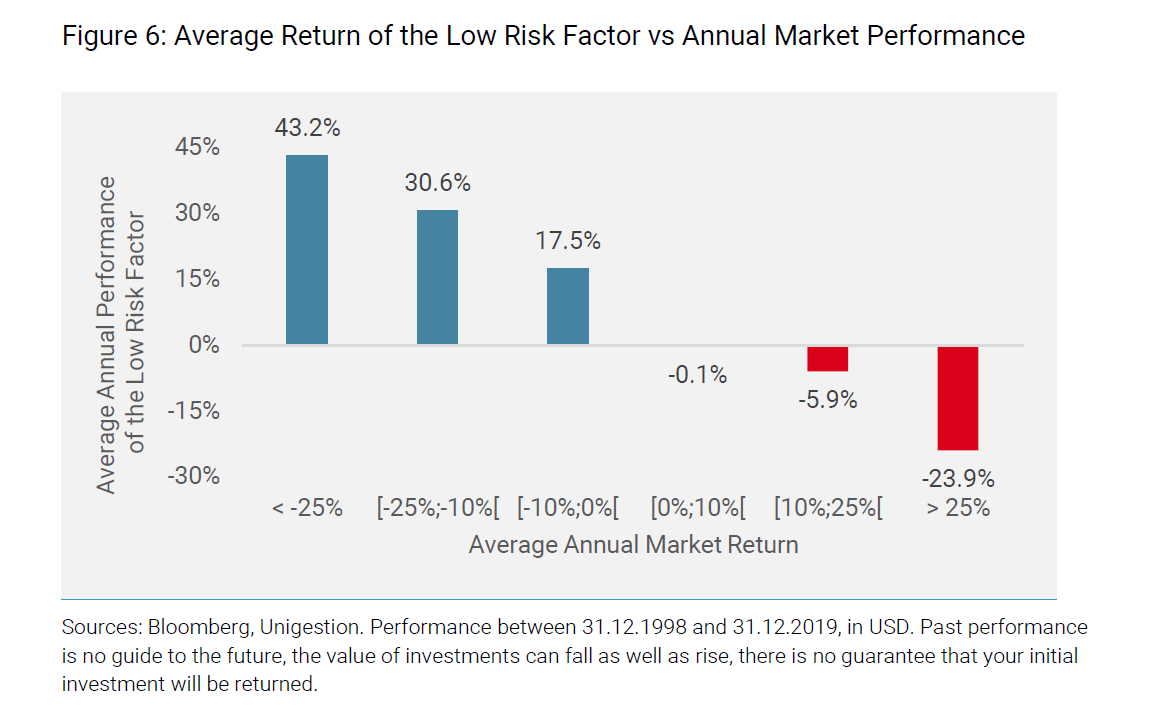 Despite this history, some passive low risk strategies managed to deliver exceptional upside capture in 2019, notably the MSCI Minimum Volatility index series. One could legitimately question such behaviour given the unfavourable market regime. At Unigestion, we believe this performance was driven by an uncontrolled valuation risk, which was fueled by a powerful crowding effect.

Looking at valuation levels first, the MSCI Minimum Volatility index currently exhibits significant exposure to expensive names, without higher quality characteristics (Figure 7). It is interesting to note that, at the same time, the index is also heavily tilted toward illiquid stocks (Figure 8). 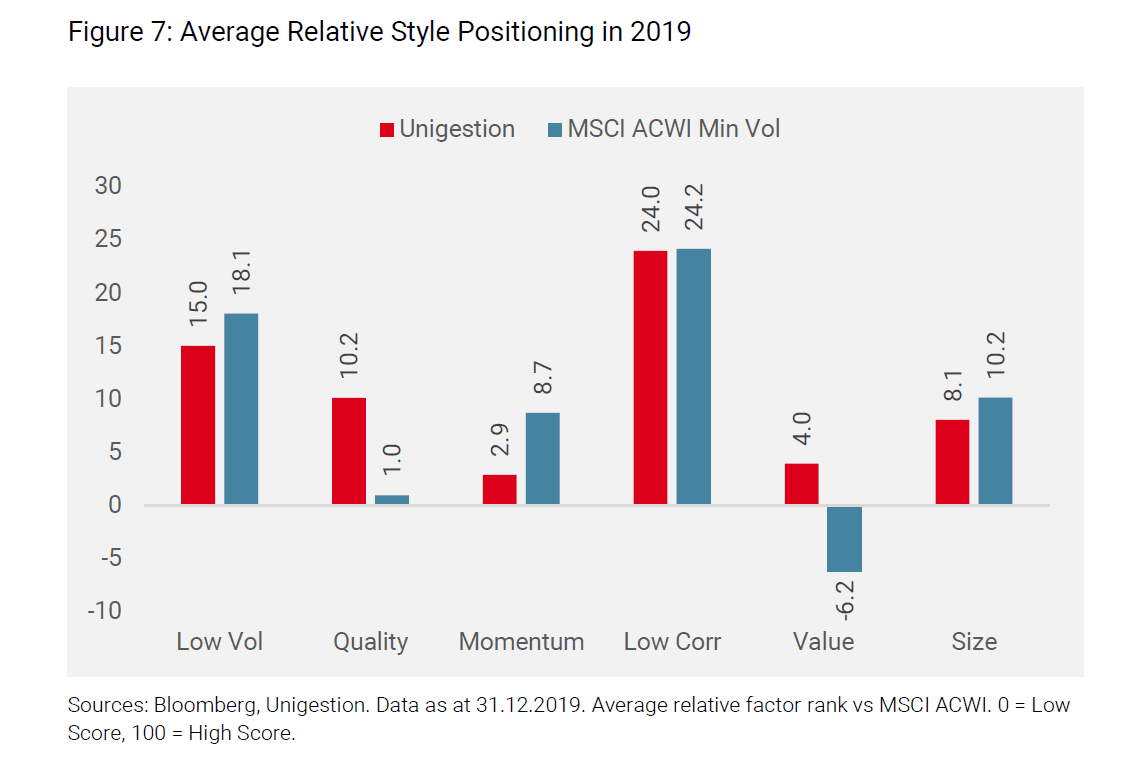 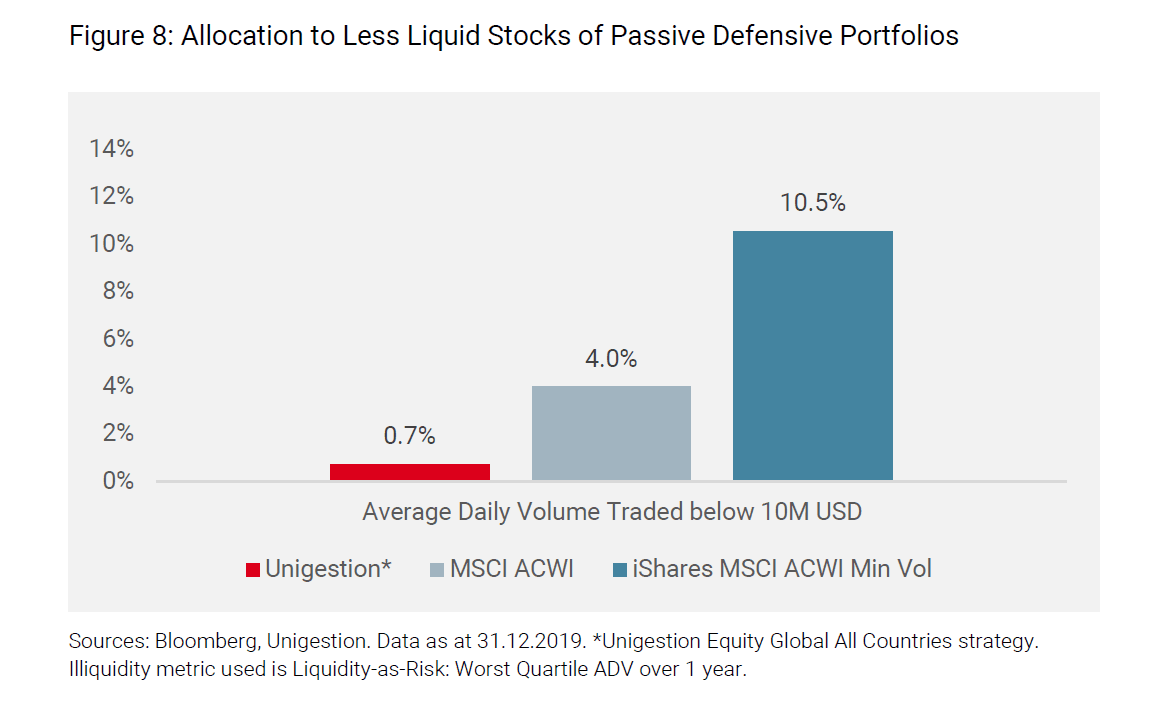 This exposure to expensive and illiquid names, whose performance was potentially pushed up by flows, and a lack of positive newsflow on the earnings side, should be a major concern for investors, especially when those flows were supported by accommodative central bank policies that drove interest rates lower in 2019. Now that rates have stabilised, investors should focus their attention on the sustainability of these artificial valuation levels, which could quickly revert to their mean in the near future. Past volatility is not always a good guide for future capital protection, as we have historically witnessed in volatile markets, such as during 2013’s so called “taper tantrum” (Figure 9). 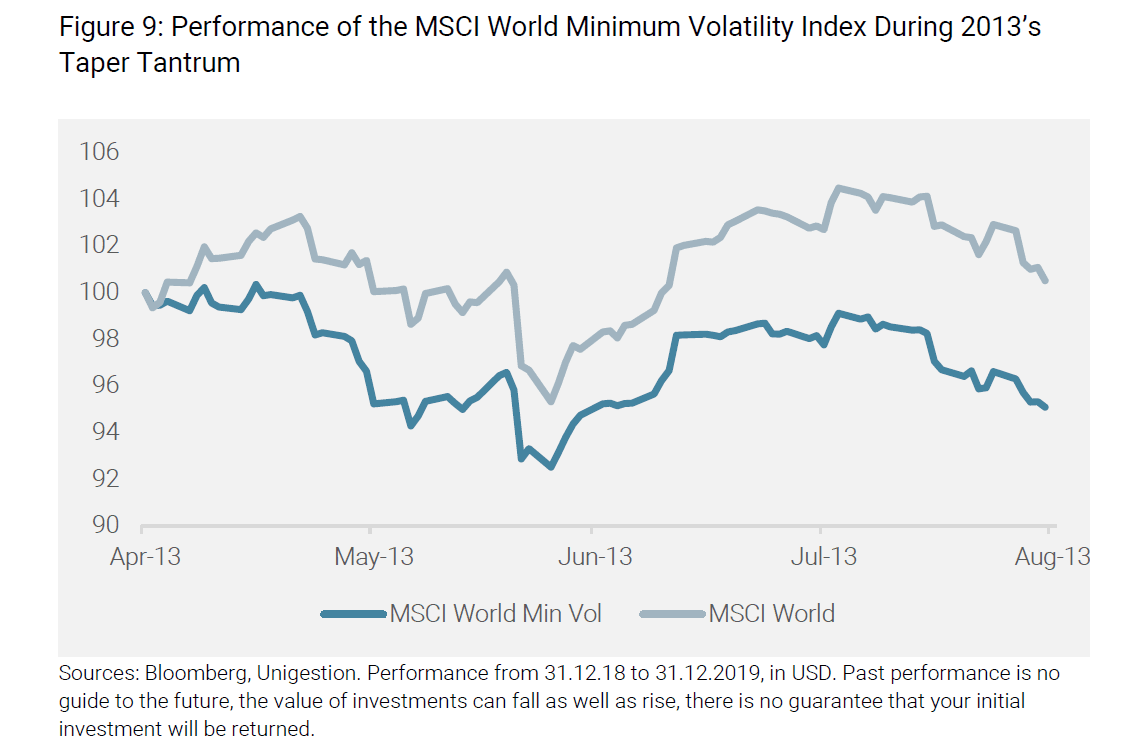 2020: a supportive environment for equities, but with some potential headwinds

From a macro perspective, our views for 2020 can be summarised as follows:

What does this imply for the performance of low risk equity strategies?

Historically, when the low risk factor has suffered in a given year, there is a strong history of mean reversion in performance in the following year, as shown in Figure 10. 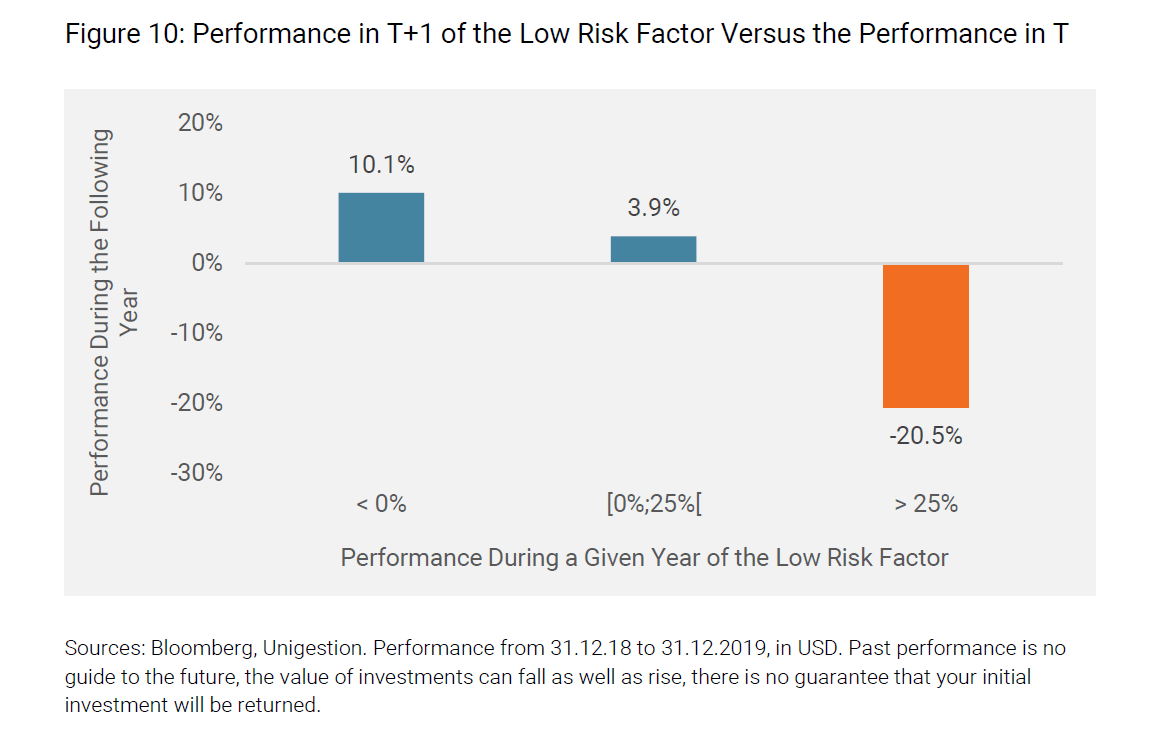 Similar patterns have occured in the past two decades

Looking back at the last 20 years, there have been three instances when the market has delivered annual returns in excess of 25%: 1999, 2003 and 2009. Although the low risk factor faced headwinds on each occasion, it demonstrated strong mean-reverting behaviour during the subsequent years. One could argue that 2009 was an exception as the risk-on rally following the Great Financial Crisis lasted longer, which is understandable given the massive correction in equity markets between 2008 and early 2009 (Figure 11). 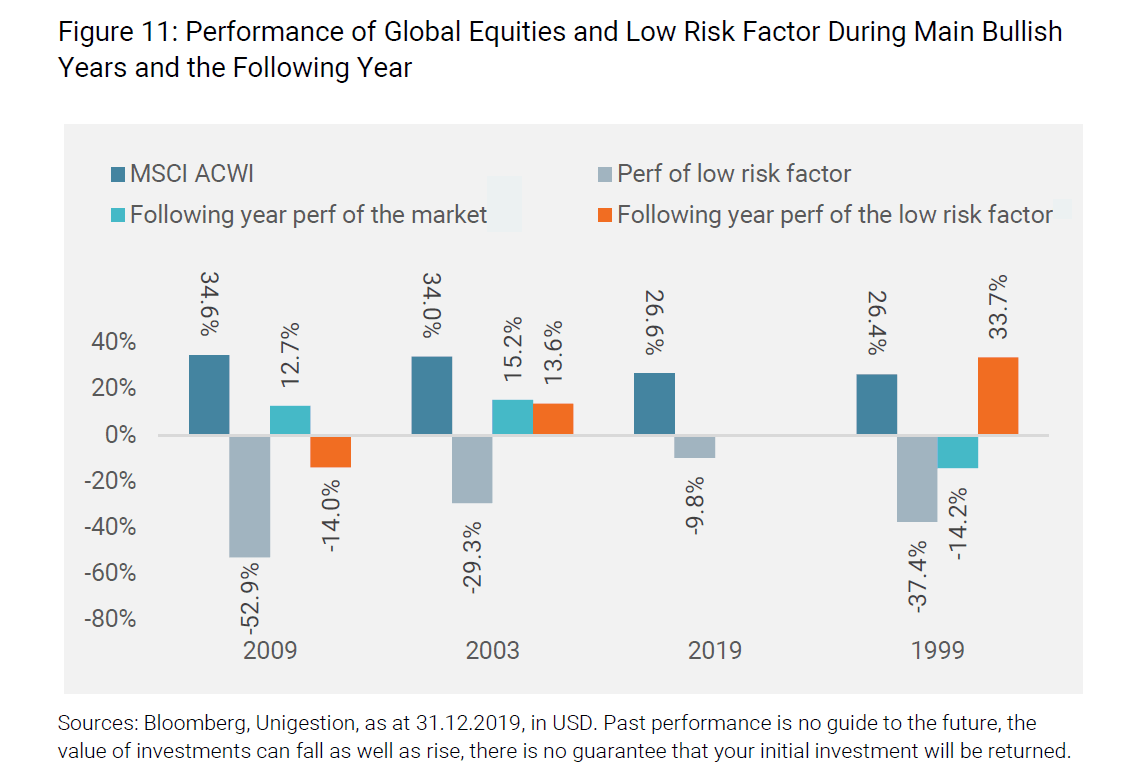 1999 is a good example of a year when a market rally driven by stretched valuations eventually ran out of steam and defensive stocks managed to protect portfolios in more turbulent market conditions the following year. Interestingly, both the 1999 and 2003 rallies preceded an election year in the US. With 2020 also a US election year, is the market set to enter a period of higher volatility? Over the past 20 years, our low risk-managed equity strategy has, on average, underperformed its benchmark during the year just before a US election and then outperformed in the election year itself. 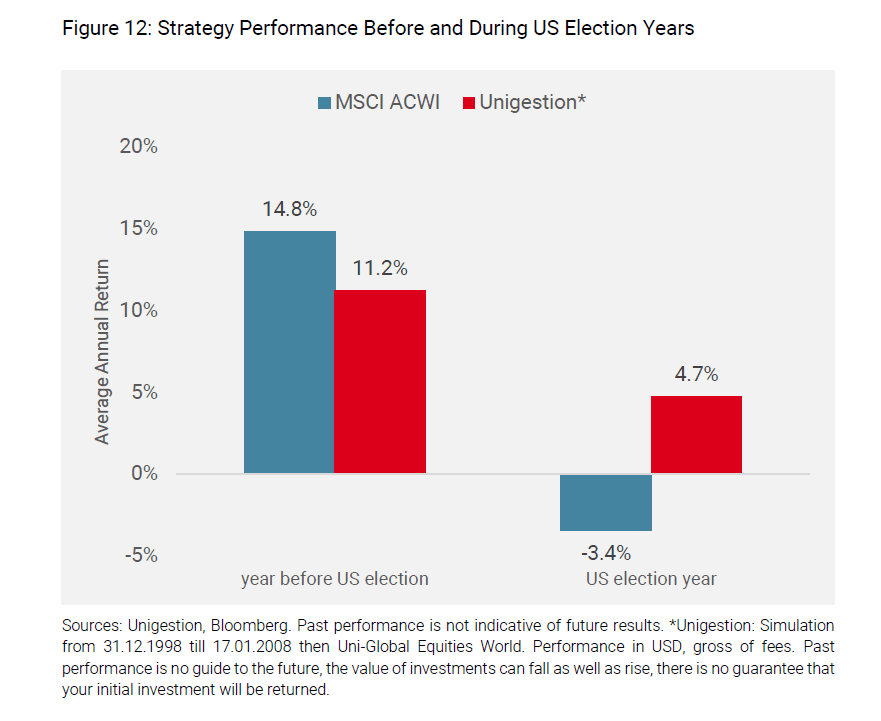 As shown in Figure 11, 2000 and 2004 saw the value style outperform more expensive growth stocks. However, not all low risk stocks will benefit from this mean reversion. In our opinion, low risk stocks which already exhibit unrealistic valuation levels are less likely to benefit from the traditional protection offered by low volatility stocks.

The spread between value and growth stocks has once again reached an all time high and investors should be very careful when buying allegedly defensive stocks, but which in reality display biased liquidity and valuation characteristics. We have a high conviction in our ability to manage non-volatility-related risks, which are not properly factored into passive low risk strategies. Historically, after periods where the value factor has significantly underperformed, it has bounced back dramatically – as demonstrated in 2000, 2004, 2008 and 2016 (Figure 13). 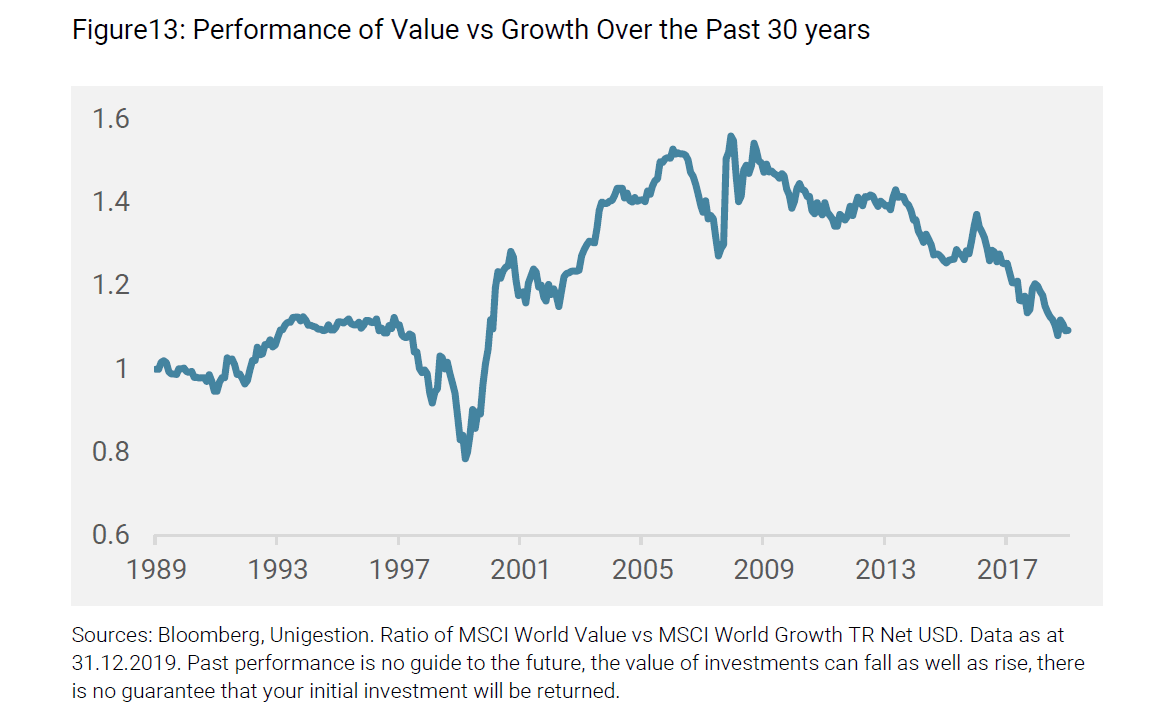 Liquidity risk is clearly one of the main factors that investors need to monitor going forward. The issues with the repo rates in Q4, which forced the Fed to intervene, are a reminder of what can happen. With low interest rates a feature of most developed economies, one could argue that a major market crisis is less likely to occur given the central banks’ “insurance” to mitigate systemic risks. Nevertheless, there are many potential sources of turbulence which central banks could struggle to mitigate: the Middle East crisis, US election uncertainties, Brexit negotiations, the real life implementation of the US-China trade deal and the potential for an increase in defaults on corporate debt in China, to name but a few. We should also not forget about the increased scrutiny on ESG issues by regulators and investors which could potentially have a significant impact on some “old-world” businesses, as highlighted by the current bushfire crisis in Australia.

Given all this, we are very likely to experience a more volatile environment in 2020, which only a resilient, liquid, high quality and reasonably valued portfolio could navigate without damage.

19 underperformance of our risk-managed strategies has been significant, its drivers are well understood. Our allocation to reasonably priced, lower risk companies has been a drag in the context of a growth-oriented rally last year.

Looking ahead, with growth stocks reaching fragile valuation levels and political risks increasing, volatility should increase despite an environment favourable to growth assets and without the threat of inflation. This should provide supportive conditions for our strategy.

In our view, today more than ever, investors will profit from risk management as a driver of both returns and capital protection when investing in global equities.