ValueWalk
Home Business Markets are never “due” for anything 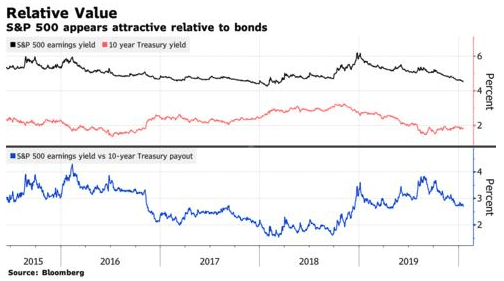 Stocks rose slightly on Friday as Wall Street wrapped up a nice weekly performance that featured new record highs for the major indexes amid strong global economic data and a solid start to the earnings season.

Stocks are gaining to start the year with bullish investor sentiment on the rise and the naysayers in sync with calls of an “overbought” market “ripe” for a fall (more than three months have gone by since the S&P 500's last decline of 1% or more back on October 9th).

Tepper told CNBC’s Joe Kernen in an email: “I love riding a horse that’s running.” Tepper, meanwhile, told Kernen in a separate email he is still bullish in the “intermediate term” in part because of the Federal Reserve’s current monetary policy stance.

A solid start to the corporate earnings season has also provided a supportive backdrop to the market as more than 8% of the S&P 500 have reported quarterly results thus far and of those companies, 72% of companies gave posted better-than-expected earnings.

With indexes trading at record highs, the S&P 500 up 13 of the past 15 sessions and with stocks trading at historically high levels versus earnings, expected profits and sales, it is understandable that investors might feel uncomfortable putting more money to work.

Furthermore, as Nick Maggiulli reminds us, investors are faced with the common refrain that markets are “due” for a pullback. The reality is that markets are never “due” for anything. After studying the historical data Nick demonstrates that there is little to no relationship between prior 10-year returns and growth over the next 10 years.

For example, if you look at how the S&P 500 performed over its prior 10-years (starting in 1936) and then look at how it grew in the future, you won’t see much of a pattern.

Interestingly, Nick demonstrates that “while the prior 10 years show little to no relationship with future returns, this is not necessarily true if we look at returns over the last 20 years. Typically, if U.S. markets did well over the prior 20 years, they did poorly in the next 10 years, and vice versa.”

Nick’s research suggests that if history were to repeat itself in some meaningful way, the S&P 500 would be 4x higher by 2030 than where it is today.

Is this such an outrageous prediction given where we stand with persistently low borrowing costs and inflation?

Sarah Ponczek in a recent piece in Bloomberg explored this “new regime for stocks” and found that stock prices have the potential to rise a lot more before reaching valuations that are justified by bond rates. Some suggest as high as 30 times earnings on the S&P.

There is no doubt that buying a quality asset at a low/reasonable price is more attractive than purchasing it a higher price. Yet the more interesting point to be gleaned from the above is that divesting or not investing at all based on the simple adage that ‘The market’s expensive therefore I’m a seller’ rarely works. The market historically has been rewarded with higher valuations when interest rates and inflation are subdued.

Although there are no laws which guarantee the market will follow this historical trend and/or for how long, it is interesting to consider that those predicting a poor decade for stocks ahead may not have the data/evidence on their side…

For some of our picks for 2020 please find them on Yahoo Finance here.

For our thoughts about 2019, our portfolio composition headed into 2020, and our outlook for 2020 please find a copy of our 4Q annual letter to our partners on ValueWalk accessible here.

"The world is ruled by letting things take their course.” – Lao-Tzu