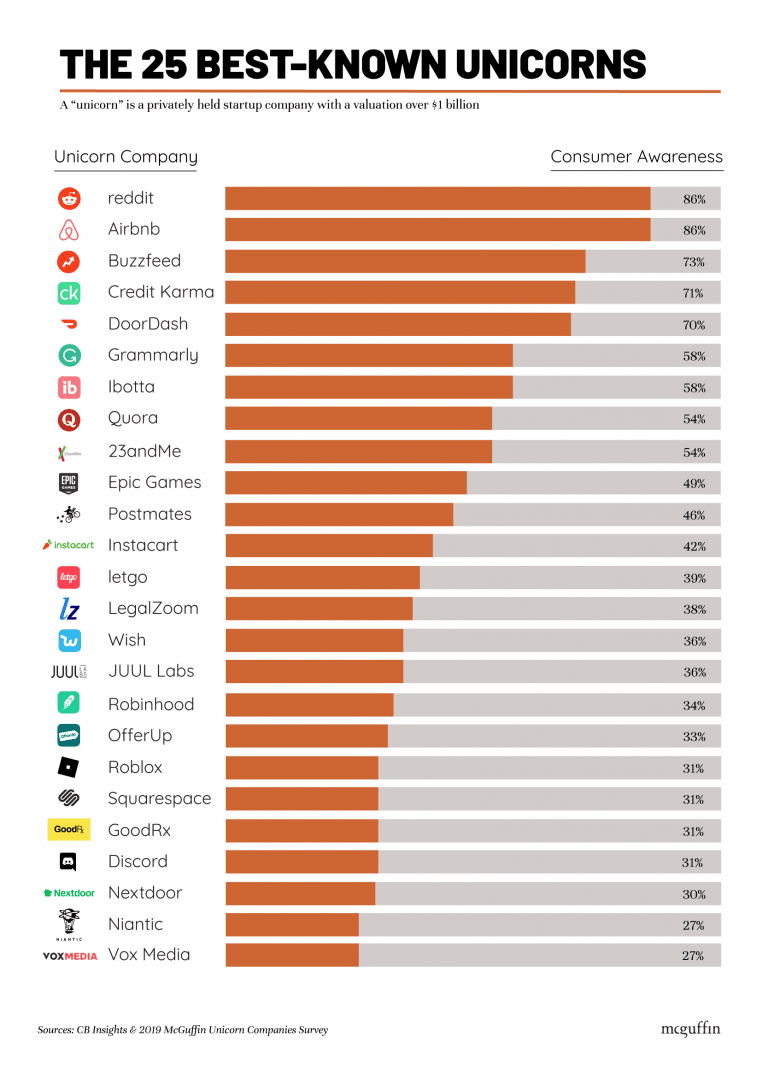 Unicorn companies are defined as a privately held startup company with a valuation over $1 billion dollars. The list of companies that have reached “unicorn status includes household names like best-known names such as Uber, Spotify and Twitter. There are currently 444 Unicorns worldwide according to CB Insights, 178 of them located within the US.

McGuffin Creative Group set out to explore the relationship between valuation and brand awareness among US-based Business 2 Consumer unicorn companies. To do this, they surveyed over 4,000 consumers to determine which unicorn companies’ consumers are most familiar with. The analysis by McGuffin Creative group analyzed the top 25 best-known unicorns, how brand value aligned with consumer awareness, the fastest growing unicorns as well as demographic breakdown for the best-known unicorns by gender and by age.

Reddit, Airbnb, Buzzfeed, Credit Karma and DoorDash are the best-known unicorn companies. Listed below is the full top 25 list ranked from top levels of consumer awareness to least:

Reddit and Airbnb’s popularity transcended age and gender differences to remain the two best-known companies on the list. While the bulk of the data tells us that a higher valuation leads to higher awareness, there are exception like JUUL Labs who is valued at $50 billion but is known by just 36% of consumers.

The second part of the analysis looked beyond the most well-known unicorn companies and focused on the fastest growing Unicorns. The fastest-growing unicorns are JUUL labs ($68.7M per day), Epic Games ($34.7M per day), Scopely ($20M per day), DoorDash ($18M per day) and Airbnb ($11.1M per day). Growth is indicated by the value added per day since the company joined the unicorn list.

The full list of fastest growing Unicorns can be seen below:

To see the full breakdown of the most well-known unicorn startups by McGuffin Creative Group, see the graphics below.