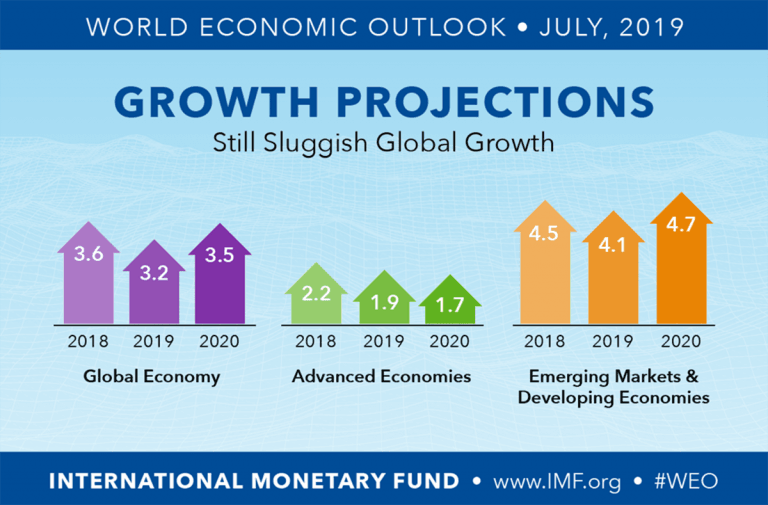 Private Equity Perspective 2020: What factors might influence private equity firms in the year ahead?

As we head into 2020, there are plenty of concerns on the minds of private equity investors – a fragile global economy, political tension around the world, a domestic stock market trading near all-time highs, a trade dispute between the world’s two largest economies, uncertainty about Brexit, and a US presidential election.  If these issues weren’t enough to worry private equity investors, there is also the matter of the record-high levels of dry powder sitting in fund coffers in search of worthwhile deals.  Whatever happens in 2020, the year is likely to be very interesting.

Experts are saying that the global economy is akin to making lemonade from the basket of lemons they have been forced to deal with.  Nearly all – both on Wall Street and in government – agree that things aren't great; but they aren't bad either.

The International Monetary Fund (IMF) forecast as of July 2019 is for the global economy to grow 3.5% in 2020.  As the table below illustrates, most of that growth is expected to come from emerging economies.

The IMF forecast for economic growth in developed markets is in line with the US Federal Reserve, which forecasts that growth in the United States will end 2020 at just 1.9%.  That number is not far off from what Wall Street expects.

Analysts polled in a recent CNBC survey say that the US economy will grow at less than 2% next year and that it won't go into recession.  Most commentators believe that whatever happens to the economy won't negatively affect stock prices.

According to the Wall Street Journal, the consensus is that stock market (S&P 500) gains will be in the low single digits (right around 3%) in 2020.  Analysts suggest that this will be the result of continually slowing earnings growth throughout the year.  Some say that this could potentially lead to declines in stock prices, but the majority do not hold this view.

According to FactSet, the aggregate median earnings estimate for companies in the S&P 500 is forecast to be $178.57 in 2020.  As of December 13, 2019, actual reported earnings total $162.17.  So, the consensus estimate represents an increase of just slightly more than 10%.  One could surmise that this bodes well for the market.  With the S&P 500 hovering around 3200, that translates into a forward-looking price earnings multiple of 17.9.  Given that the average P/E ratio has been closer to 19 for the last 50 years, one could argue that there is room for further appreciation in public stock prices.

Still, there's not a lot of room for error.  There are plenty of potential risks.  There is still uncertainty regarding a durable trade deal between the US and China.  Brexit hasn't yet been resolved.  The US presidential election presents further uncertainty.  Plus, the world never seems to be without lots of localized geopolitical conflicts.  Any of these issues could spook consumers and put the brakes on the current, albeit tepid, economic expansion.  This could send investors to the sidelines and end the decade-old bull market.  With interest rates around the world near zero, there are not many options left for central banks if conditions were to worsen.

Given the generally high correlation between the public markets and private equity, this could mean a slowdown in deal flow next year.  For those on the buy side this isn't all bad news.

Lower valuations are a pricing issue, not a fundamental issue.  Declines are typically temporary and can create opportunity for those with the right information.  Due diligence becomes more critical as a deep understanding of a company's operations is essential to distinguishing strong companies in weak markets from weak players in strong markets.  Fewer deals may make cherry-picking easier.

The key for buy-side dealmakers is to be armed with better information than their competitors.  An automated deal sourcing platform can provide this information and aid private equity, venture capital firms, and investment banks in their pursuit of premium companies trading at discount prices.  For sell-side dealmakers the situation is a little more challenging.

As multiples get compressed so do the opportunities for successful exits.  The key is to identify strategic buyers that recognize the specific components of a target company's product pipeline or other future value-creating projects.  When a potential suitor sees these in a target, it enhances that company's worth to the buyer.  This understanding can facilitate deals even in a depressed market.

Accurately assessing the DNA of a potential acquirer's business can make this happen.  The ability to demonstrate meaningful value creation in a post-transaction, combined entity can lead to multiple expansions regardless of market conditions.  All of this can be facilitated by deal sourcing software that digs deep into a given market segment and illuminates the specific strengths and weaknesses of each of the companies – both large and small – competing for a share of it.

Another potential risk in the market is that large buyout fundraising is significantly above its long-term trend.  According to Schroders, this increased interest in private equity has created a “frothy” environment.  As a result, there may be opportunity in smaller deals.  Schroders believes that "smaller deals represent a large investable universe, which can restrict access for some larger funds, as it is harder to deploy very large amounts of capital quickly".  These opportunities are not typically on the radar of big buyout funds and are the type that an automated deal sourcing platform is ideally suited to identify.

Is PE The New Lightning Rod in Domestic Politics?

Social Security and Medicare have been perennial hot buttons in domestic politics.  Yet, these days private equity seems to conjure up nearly as much rancor.  The presidential election will introduce some uncertainty into the marketplace as investors try to reconcile policy statements with business conditions.  New rhetoric exacerbates this.

Private equity firms may have to compete in a different political environment.  Their business practices may be subject to increased regulation or less favorable taxation.  Their deals may face greater scrutiny from lawmakers.  Deals done in highly visible sectors may need to be concerned with potential political consequences.  This is especially the case as it relates to workforce dislocation issues.

For dealmakers this new reality might create either a “political premium” or a “political discount” on potential deals.  Screening for deals may require an analysis of unclear political metrics in addition to the more certain financial metrics.

Putting All These Pieces Together

Whatever happens to the global economy will not change the underlying business of private equity.  This is also the case whether the domestic economy follows suit or not.  No matter the direction of global or domestic financial markets, deals will continue to progress to closure.  This is true regardless of the outcome of the 2020 elections.  It will be business as normal, even if there is a "new normal".  The issues firms deal with today will remain the ones they must deal with in 2020.

The main issue is that there are too many dollars chasing too few good deals.  According to a study commissioned by Dechert Global Private Equity, dry powder stands at an all-time high, some $1.7 trillion and growing.  Private markets specialist, Preqin, says that 79% of private equity investors expect to increase their allocation over the next five years.  Targeting and sourcing deals will continue to be among the industry’s biggest challenges.

This won’t change with the economy, stock market, or political environment.  Capital will still need to be deployed.  To improve the chances of getting more and better deals done, regardless of the economic or political climate, dealmakers must stick to the fundamentals and focus on what a firm can control.  To stay ahead of the competition in 2020 technology and data mining will be more relevant than ever.

We end 2019 in much the same way we started.  Many of the same concerns that troubled investors in January remain in focus today.  Some at the beginning of the year feared recession was imminent.  There are still some signs that the domestic economy is slowing.  Yet, consumers haven't stopped spending, so GDP continues to grow.  Threats of additional tariffs threatened both the fragile economy and volatile stock market.  Brexit was a huge wildcard that potentially threatened European economic progress.   These issues have not been resolved and we carry each of them into 2020.  Layer on top of this the uncertainty that next year's presidential election brings.

Just like last year, business must continue, capital must be deployed, and deals still need to get done.  That won't change in 2020.  What may change is the approach firms take to close transactions.  The very nature of transactions may change.  The key to having a successful 2020 is to be adaptable while maintaining a keen focus on the fundamentals.

The more things change, the more they stay the same.