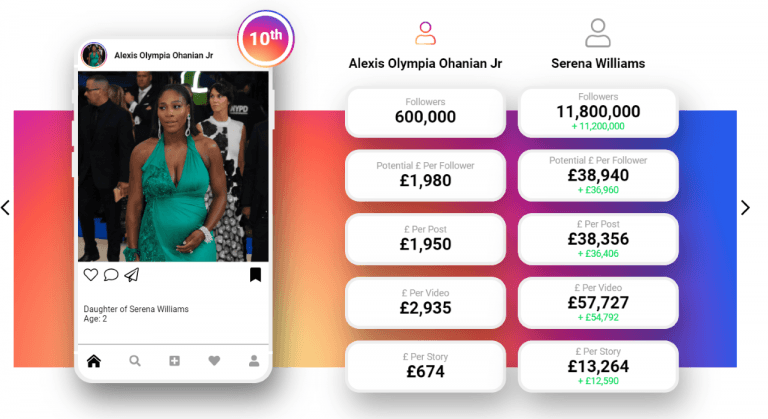 New research has uncovered the fortunes that could be made simply by posting on social media by the offspring of some of the biggest names in sport.

Every post on two-year-old Alexis Olympia Ohanian Jr’s – daughter of Serena Williams –  Instagram account is worth a massive £1,950 while she is currently earning around £1,980 per follower on the account after new figures released exposed just how much people can benefit from being related to a famous athlete.

Williams is one of the greatest tennis players of all time and even won the Australian Open whilst two-month pregnant and has almost 12,000,000 followers on Instagram, meaning she earns £38,356 per post on the social media site, another £57,727 per video and £13,264 for every time she posts on her story.

However Alexis Jr, with a following of over 600,000 could potentially earn more by posting one sponsored video than an average UK nurse would make in a month.

Out of the celebrities selected by OLBG’s Insta Fam – all of whom have a child also on the site – Brazilian footballer Neymar is the highest earner at a massive £412,816 per post and £419,100 per follower.

Serena Williams not only athelete with rich offspring

Former England football captain David Beckham is second in the list at £190,806 per post but 17-year-old son Romeo, who mainly posts modelling pictures, still brings in £7,801 per post and has amassed over 2.6million followers at £7,920 per follower.

LeBron James Jr is one of the selected sporting offspring who is making a name for himself in his own right as a basketballer but his £11,052 per post is dwarfed by the £169,677 earned by his father.

The one child who has gone on to exceed the online earnings of their parent is Mick Schumacher, son of legendary F1 driver Michael Schumacher who suffered a severe head injury in a ski accident in 2013. Schumacher Sr’s Instagram profile is less significant than his son’s, who has amassed over 820,000 followers having forged himself a career in racing and is currently competing in Formula 2.

However, his son, Mick, who has yet to achieve anything major in the sport, boasts over 189,000 followers more and can earn £614 more per post than the most successful driver in the history of the sport. One sponsored post on his Instagram account would bag the young driver more than the average UK police officer makes in a month.

To see the full list of sporting children and their legendary parents’ Instagram statistics, check out our tool: https://www.olbg.com/insights/instafam