The Fed left interest rates unchanged today after cutting at the three last meetings. The Fed funds target range therefore remains at 1.75%, down from 2.5% at the beginning of the year. The decision had been widely anticipated with market participants pricing in the likelihood of no change at 95% prior to the meeting.

The dots forecast for 2020 is now indicating no change, from at least one hike at the previous meeting. The decision was unanimous, the first time since May. Board members now broadly consider that rates stand at an appropriate level, and that the bar is now set for them to adjust either to the upside or to the downside. The terminal long-term equilibrium rate remains unchanged at 2.5%, although the next hike (if any) is not predicted to happen before 2021. Economic forecasts remain mostly unchanged with only 2020 unemployment rate expectations adjusted lower to 3.5% from 3.7%. GDP and PCE projections stand unchanged at 2% and 1.9%, respectively.

Markets were prepared for an aggressively neutral FOMC statement, and this is exactly what they got. Fed sensitive assets are trading up gently, enjoying monetary policy support for the last time in 2019. US 10y and 2y government yields are both down a couple basis points, equity markets are trading higher, and volatility is quietly receding. The S&P 500 is trading at 3140 at the time of writing, the VIX index is hovering around 15 and the US dollar index is a touch softer, at 97.3. Investors’ focus will now shift to US/China trade tensions, and whether or not tariffs on Chinese goods will be implemented over the weekend by the Trump administration.

What a year 2019 has been in terms of policy action. The Federal Reserve converged toward market expectations: at the end of last year, dot plots indicated three hikes in 2019 while Fed fund futures priced in three cuts. Divergence of opinion between the FOMC and investors is tighter but it still exists. There is nothing in the dots for 2020 but market participants do expect at least one more cut, indicating a negative bias toward future macro conditions.

With this in mind, our current dynamic assessment articulates around three risk factors:

Macro: Growth conditions, as depicted in our proprietary Nowcasters, have stabilised around potential for more than six months now, thanks to the coordinated efforts of policy makers to avoid falling into recession. The full- blown effects of such accommodation are yet to be seen, but it is fair to consider that the risk of economic contraction in the first half of 2020 is very low. In addition, inflation is nowhere to be seen and ample monetary support seems guaranteed by the majority of policy makers.

Market Sentiment: Risk appetite has surged on the back of receding tensions on the Brexit and trade war fronts over the course of October and November. Growth- related assets rallied and what used to be light positioning in the market, and therefore a tailwind to our positioning, has now disappeared. Smart money has massively increased positions in equities and credit; sentiment is all positive and this could create fragility going into the year- end liquidity drought. 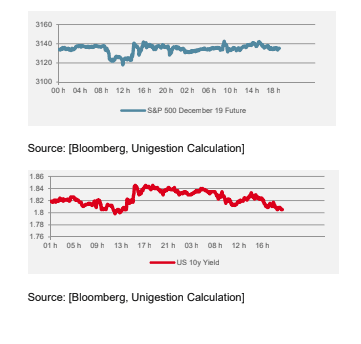 Valuation: Most assets are rich after such strong returns year-to-date. Government bonds remain the most expensive of all but richness is now also observed in certain segments of equities and credit too. We remain worried about potential valuation mean reversal that would weigh on diversified allocations.

The global context remains supportive for asset allocation. Stabilised economic momentum, lacklustre inflation, central bank accommodation and fading geopolitical risks have us favour risky assets such as equities and credit. However, increased positioning, higher risk appetite and more expensive valuations create the need for caution, expressed through overall risk reduction, and specific hedges. The end of the year will be driven mainly by developments in US/China trade negotiations, but economic fundamentals are, and will be, the key factor for active asset allocation going into next year, especially as long as central banks remain accommodative.