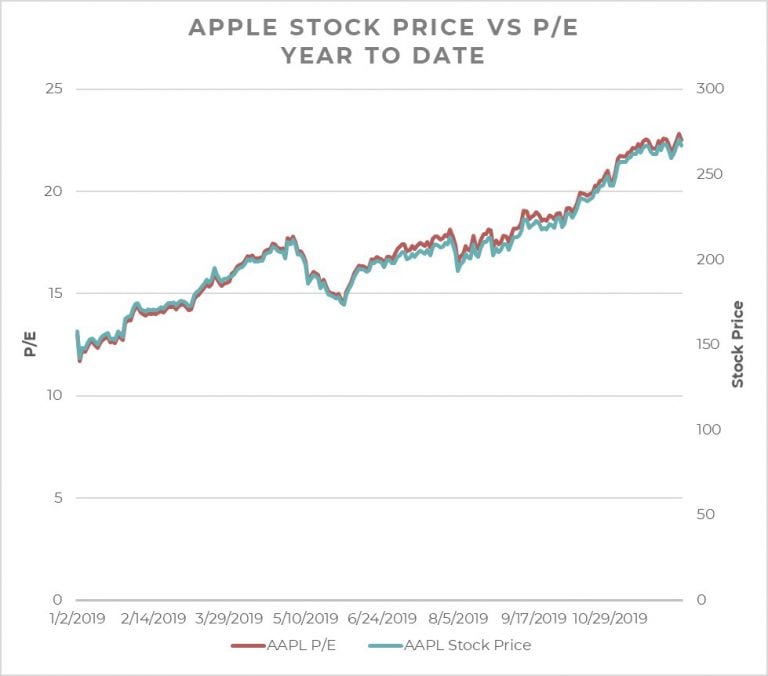 Despite its size, Apple Inc. (NASDAQ:AAPL) has had a remarkable year in the stock market.  Year to date Apple’s stock price has risen approximately 70%. Though the price increase has been a boon for Apple investors, it should also be a cause for concern.  The primary source of that concern is the fact that almost all the increase in Apple’s stock price has come from expansion of the P/E multiple, not improvements in the company’s fundamentals.  The graph below shows that this year Apple’s P/E multiple, measured relative to the last twelve months of earnings, has risen from 13x to 22.4x – an increase of 72%. Furthermore, the graph demonstrates that Apple’s stock price and P/E multiple track each other closely.  This visual impression is confirmed by statistical analysis. The correlation between the price and the P/E ratio is 0.88.

At 22.4x Apple’s P/E is the highest it has been in the last decade.  In this respect, it is worth remembering that the primary determinant of a company’s P/E ratio is the expected rate of growth in earnings and cash flow.  Apple’s record P/E multiple implies the market is expecting faster growth than any time in the past ten years. Yet a plot of Apple’s year-by-year earnings as shown below does not indicate any sudden acceleration.  Though Apple’s net income is bumpy, if anything its growth rate has declined over time. Of course, the market may be expecting a sudden new burst of growth, but that raises the question as to the possible source of such growth.  Given the immense scale of the company and the maturity of its products, the new source of income would have to be large to have a significant impact on Apple’s growth rate.

Apple has introduced new products.  For instance, in November 2019, the company announced its entry into the video streaming market. While the announcement was exciting and attracted a lot of attention, how much can it be expected to move the needle of Apple’s earnings?  To answer that question let’s look at a simple calculation. Apple TV+ is now available for monthly subscription fee of $4.99. Let’s assume the service is a hit and Apple is able to match the domestic subscriber count of Netflix, 60 million subscribers.  Admittedly, this is a heroic assumption. With 60 million subscribers each paying $5 a month, Apple will collect an additional 3.6 billion of revenue annually. Given Apple’s revenues of $260 billion in fiscal 2019, this amounts to a 1.38% increase in revenues.

In addition, streaming’s contribution to Apple’s income is likely to be a substantially smaller proportion of revenue than Apple’s core business of selling high margin smartphones. Overall, in 2018 Apples net income was $55 billion in fiscal 2019 resulting in a margin of 21.15% on the $260 billion in revenue.

Applying a margin of 21.15% to revenues of $3.6 billion leads to added earnings or $760 million, again a 1.38% growth rate. But streaming is a very different business than selling iPhones. For example, Netflix’s margin was 7.5% on revenue of $18.9 billion in the previous four quarters. If Apple matched that margin, the added net income would be only 270 million representing a growth rate of 0.5%.

Turning to macroeconomic data, there is no apparent explanation for the expansion of Apple’s P/E multiple.  Overall GDP growth has not accelerated in the past year, if anything it has slowed. International trade relations actually worsened during 2019 and uncertainty increased.  The US political environment became even more toxic due to the initiation of impeachment.

To summarize, it is difficult to explain the pronounced runup in Apple’s P/E multiple.  This presents a significant risk for Apple shareholders and those considering purchasing the stock.  When stock price increases are due to increases in earnings, attributable, for example, to introduction of new products, or attraction of new customers, the price increases tend to be sticky.  Once new customers have been acquired, they tend to stay for the long haul. The immense long-run success of the iPhone is an example.

The higher earnings provide a permanent boost to the stock price.  When the increase in a stock price is due to expansion of the multiple caused by expectations of future growth not reflected in current operations, it’s permanence is much less secure. Just as enthusiasm can wax, as it has for Apple in the last 12 months, it can wane.  If sentiment changes and expectations turn down, the stock price can drop precipitously. Given that the current expansion of the multiple is so difficult to rationalize, how can one be confident that a contraction is not around the corner?

In closing, although I have focused on Apple because it provides such a clear example, Apple is by no means unique.  There are dozens of companies in the current market who have seen their stock prices jump due almost exclusively to expansion of the P/E multiple.  Investors would be well advised to inquire as to the source of that expansion. If, as was the case with Apple, the expansion cannot be explained, caution should be the order of the day.