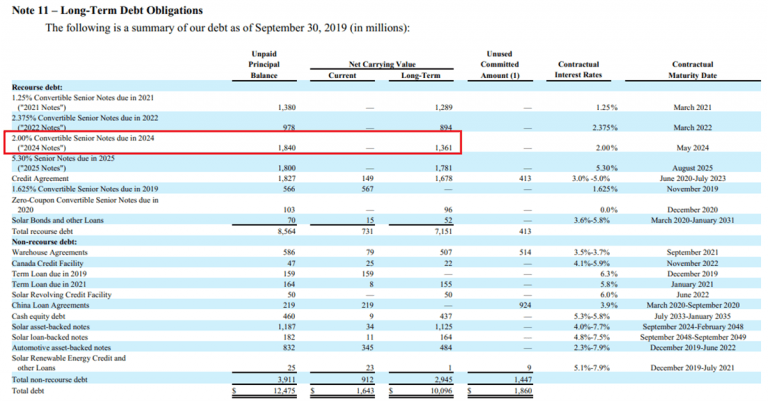 A reader sent me this (his answer are below):

Here’s a quiz that we’re running among friends and followers of Tesla (long or short).

It seems pretty simple – the question is basically to point what happened to Tesla’s FCF LTM – but most don’t know the answer!

What do you think the answer is?

According to its own definition in its quarterly letters (and to Bloomberg – see exhibits below), Tesla generated $974 million of “free cash flow” (FCF) in the last twelve months (LTM):

But we know that Tesla also raised $826 million of equity (net of issuance costs) in 2Q19. Well, that’s pretty much the difference between the net debt from 3Q18 to 3Q19!

There was a tiny immaterial acquisition.

So where did the almost $1 billion in FCF LTM go?

[Note: before anyone rushes to say “$300 million went to hedge the converts!”, which is certainly part of the answer, remember that Tesla also received proceeds from exercise of stock options in the amount of $243 million LTM… So the answer isn’t that simple]

Investors often need to be detectives. GAAP accounting allows for significant management discretion, and large businesses can often have complicated disclosures. This dynamic can be incredibly irksome when dealing with a management team that appears to work backwards, starting at a desired level of profitability and then building assumptions into the financials that support these numbers.

That, in a nutshell, is why I never overreact when Tesla reports its earnings. It’s important to wait for the quarterly filing, the 10Q, to try and understand what really happened with the business. On Tuesday morning this document was filed, and I put on my sleuthing cap and went to work.

Why did the stock skyrocket last week? The answer is that Tesla surprised investors by reporting net income of $143 million instead of an expected loss. So let’s start by asking whether the company actually generated $143 million of economic profit in the quarter?

The clearest way to answer this question for me has always been the equity account on the balance sheet. If equity, net of any new stock issued, goes up, there is your economic profit. Tesla’s financial statements show that equity grew from $5.715 billion at the end of Q2 to $6.040 billion at the end of Q3, a gain of $325 million. But the company issued $296 million of equity, so the net increase is only $29 million – a positive economic profit, but significantly less than reported.

Another reason investors cheered was the large cash balance. But while cash went up by $383 million, debt also went up by $317 million. And speaking of cash balances, I am very skeptical of the stated cash balance.  If they really held $5 billion (as opposed to end-of-quarter window dressing) the company should have generated far more than the stated $15 million of interest income.

The next area that looked suspicious was the swing in automotive gross margins. Automotive gross profit in Q3 grew by $206 million sequentially, from $1.016 billion to $1.222 billion, while revenues actually declined slightly. That is very unusual for a capital-intensive business. Tesla attributed it to various cost benefits, including reductions in manufacturing and material costs, FX related gains, and other non-recurring items.

I suspect that Tesla is hiding some material facts regarding these improvements. For starters, FX gains have nothing to do with cost of goods sold, so should have appeared elsewhere in the financials and not used to boost gross margins. And when asked about the non-recurring items, management refused to shed any light. But industry insiders have. It seems that Tesla strong-armed suppliers to give them big rebates in Q3 – estimated at $100 million – in exchange for participation in the new model Y. In addition, a redacted document from the quarterly filing was an amendment to the Panasonic battery supply contract. Did Tesla get money from them as well? I suspect so.

3) In response to yesterday’s email from a reader about “TSLA quiz: where did the FCF go?”, another reader wrote:

1) I should have wrote that its “net debt AND finance leases” (as grouped on Tesla’s balance sheet).

2) He is right that there is a difference between the net carrying and unpaid principal balance of Tesla's debt (mainly due to the 2024 Convertible Notes), which actually increases the face value of Tesla's debt as of 3Q19 (therefore even more puzzling given Tesla's reported FCF). From the 10-Q 3Q19: 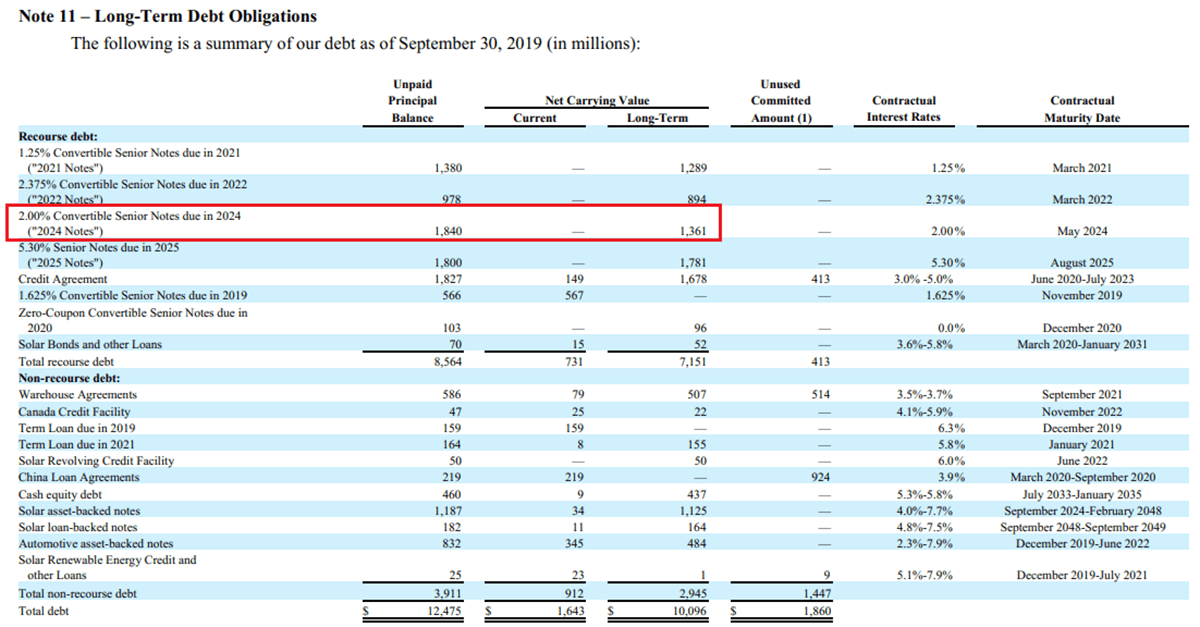 To avoid any doubt, here is the calculation of Tesla's total net debt and finance leases (Excel file attached). I have also included restricted cash, although it is debatable whether one should include it (makes no difference to the central argument in this case): 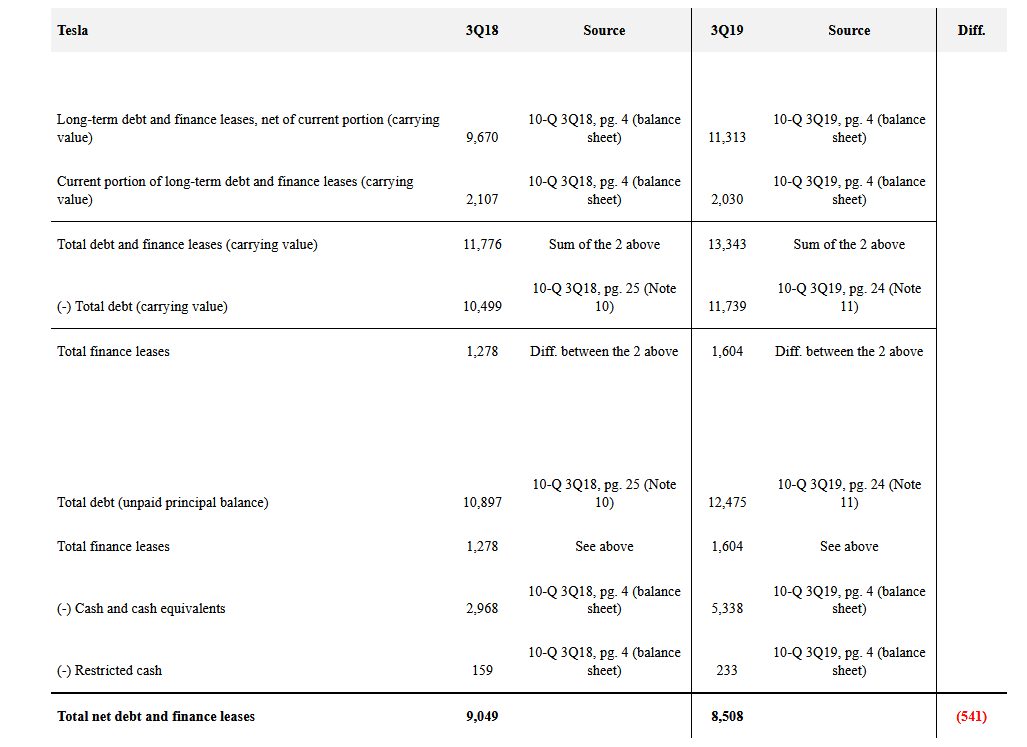 As you can see, this makes Tesla's FCF conundrum even more interesting, given the more than $800 million of equity raised earlier this year.

The main question remains: where did the nearly $1 billion of FCF go?

My answer to the Tesla FCF conundrum points mainly to three things:

1) Tesla’s (and Bloomberg’s) calculation of free cash flow ignores (i) “leased assets obtained in exchange for finance lease liabilities”, the payment of which shows up (later) on cash flow from financing.

Tesla only started reporting this supplemental cash flow information in 2019. Note that only the interest component of finance leases flows through cash flows from operations, as can be seen below in “operating cash outflows from finance leases (interest payments)”: 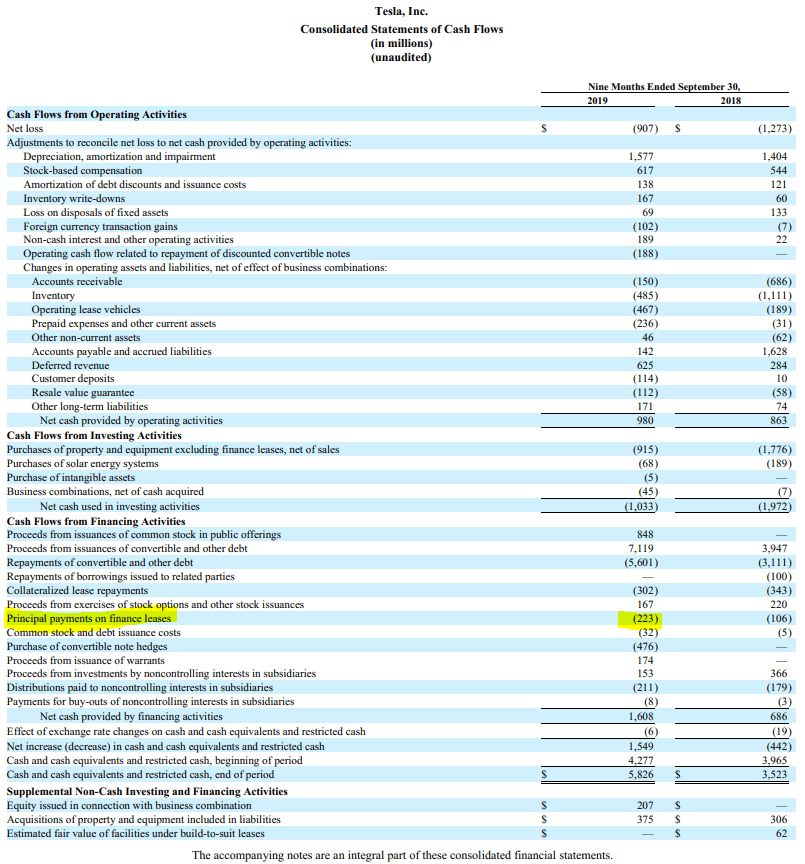 But subtracting zero is not realistic.

Those familiar with Amazon will quickly understand. The company does a great – and honest – job in explaining this in their 10-Q: 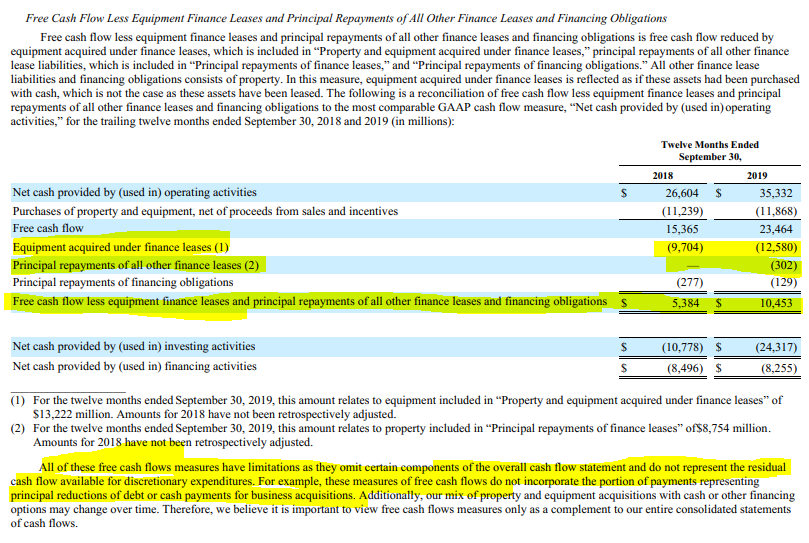 2) Tesla’s FCF also ignores “distributions paid to non-controlling interests in subsidiaries”. These relate to Tesla Energy and unfortunately there is little disclosure on them. My understanding is that the results of these subsidiaries are consolidated, but part of the cash generated is distributed to investors that helped finance costs of solar energy systems and vehicles under operating leases. The main point is that this cash doesn’t belong to Tesla’s shareholders, so in my view has to be excluded from the FCF calculation. 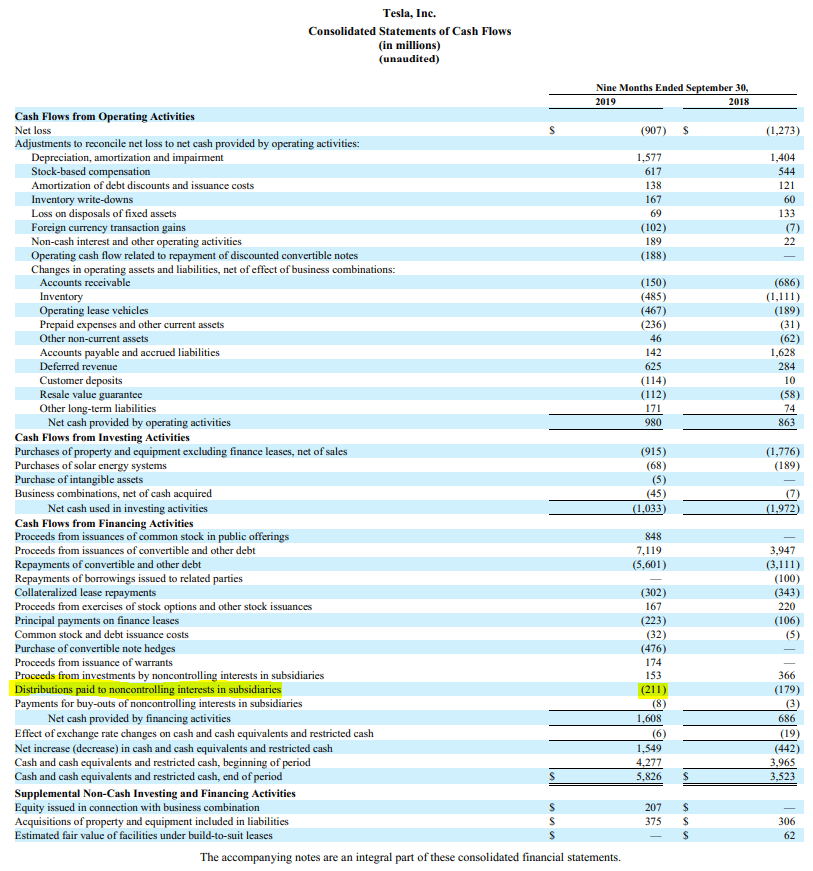 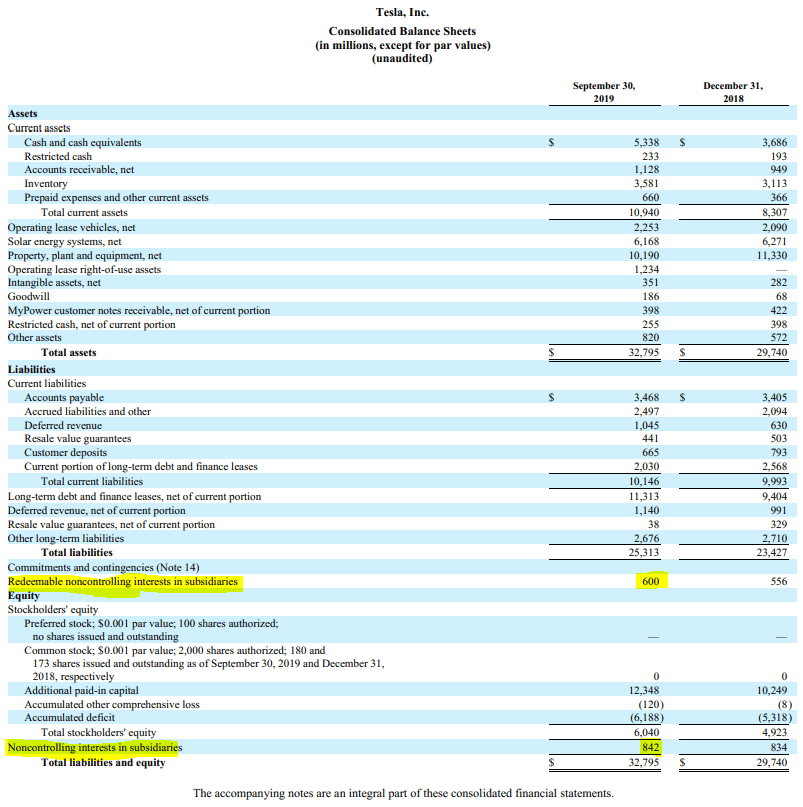 When Tesla sold the car, the cash received was classified as a collateralized lease borrowing in cash flow from financing.

This was such an important adjustment that Tesla highlighted it in its 4Q17 Letter:

However, since 2018 this line – collateralized lease borrowings – is NEGATIVE (see consolidated statement of cash flows below). This means that, as the leases come to an end, Tesla is settling the liability in cash “by either purchasing the vehicle from the leasing partner for the buyback option amount or paying a shortfall to the option amount the leasing partner may realize on the sale of the vehicle” (exact wording from 10-Q – see highlighted above). In my opinion, that needs to be included in FCF calculation. 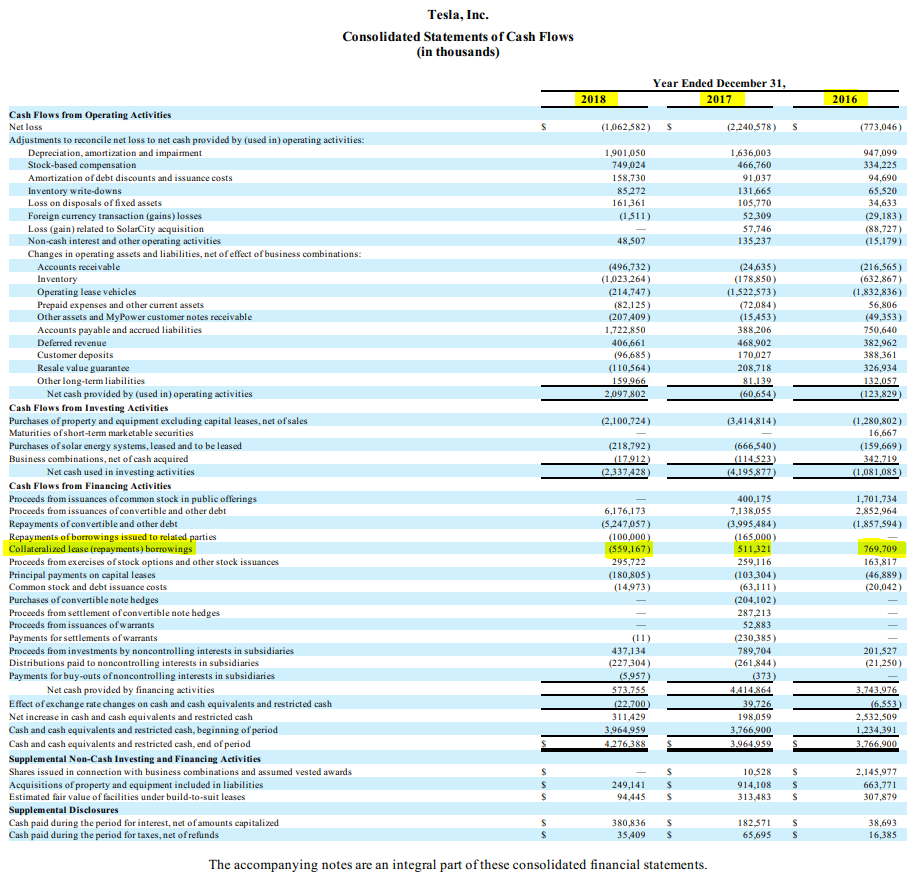 Now try to find the adjustment for collateralized lease borrowing in Tesla’s 4Q18 Letter… You won’t!

Why? Because since 2018 this REDUCES the FCF calculation… 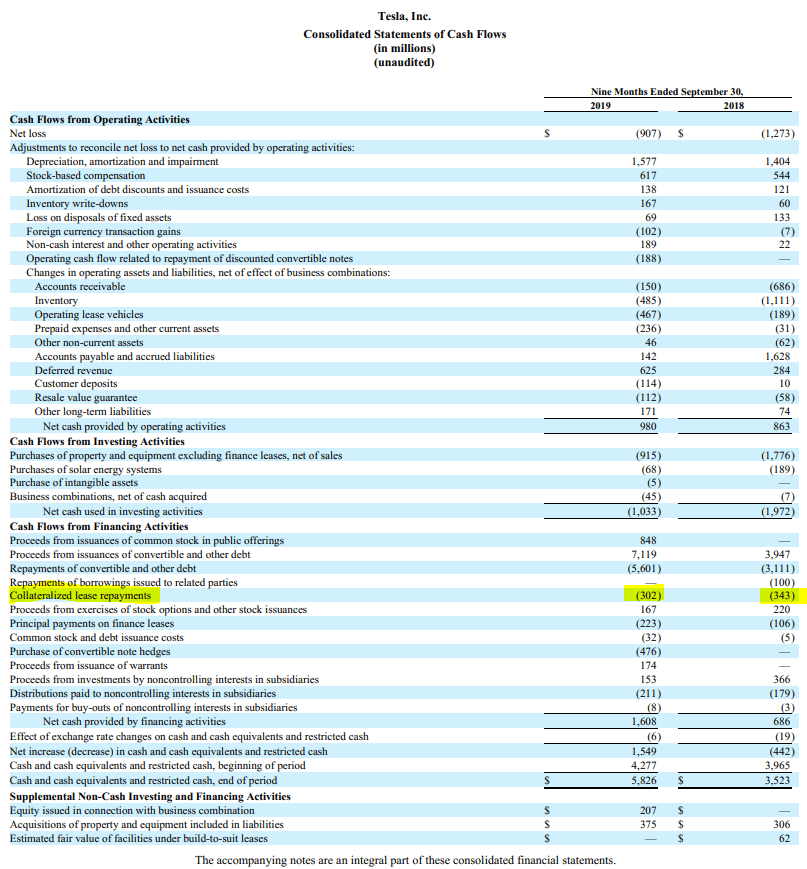 This is obviously my interpretation based on my understanding of the accounting described in Tesla’s financial statements.

I might be wrong and welcome fellow analysts to correct me in whatever mistakes I might be making.