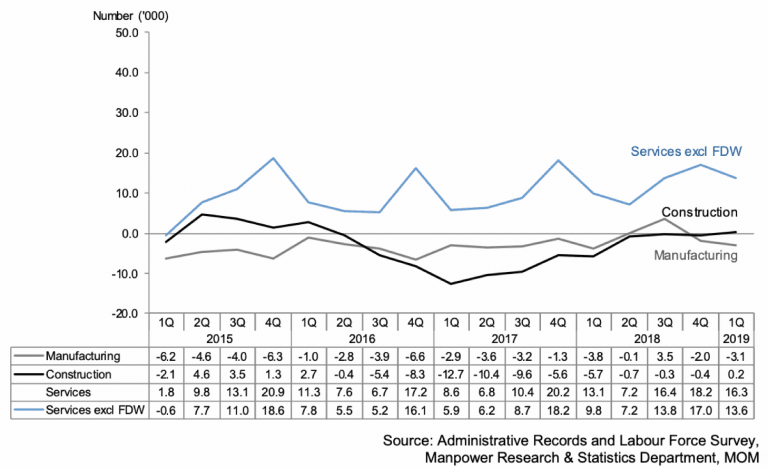 On July 2019 this year, I was sharing how I believe that the construction industry in Singapore has pretty much bottomed out during the TheEdge Mid-Year Investment Forum 2019.

As we can see from this chart, it shows the labor force numbers within the different industries in Singapore and I noticed that for 1Q2019, we see the start of an uptick in labor force numbers for the Construction industry. While it is only an increase of 200 workers, it is after a decline of 11 consecutive quarters. From 2Q2016 we see how the construction labor force shrinking non-stop till 4Q2018. Furthermore, talking to people within the industry, I got the impression that things on the ground was more positive as well. Construction firms were saying that their staff were much busier now and how their firms were winning 30% to 50% more contacts year on year.

Which leads me on to the next part, which is Tiong Woon’s and BRC Asia’s recent earnings results.

While we may no longer be invested in BRC Asia, we are still invested in Tiong Woon given its attractive valuations. If one were to take note of Tiong Woon's current valuations it is much lower than when Tat Hong was privatised and still loss making.

While these 2 companies may not be representative of the whole construction industry of Singapore, it does give me conviction that things have bottomed up and the outlook should be brighter here on out.

Reading the earnings report of both companies, one would be able to detect a shift in tone as well. Whereby, while management is cautious about the operating environment given its challenges and competition, they feel that the major infrastructure projects and pipeline of building projects in Singapore will lend support for more business opportunities as well.

One of the most recent major projects would be the S$9billion expansion of Singapore’s 2 Integrated Resorts, which will see Marina Bay Sands add a new entertainment arena and hotel tower, while Resorts World Sentosa will extend Universal Studios Singapore to include 2 new attractions. Some other projects would be the massive 1,050-hectare Changi Airport Terminal 5 in the East, North-South Corridor development, Tuas Mega Port in the West. All these mega projects should give a further lend a boost to infrastructure spending in Singapore apart from the recovery we see in the construction of residential buildings.