ValueWalk
Home Top Stories Growth-Oriented Assets: Is It Time To Call Everything Expensive? 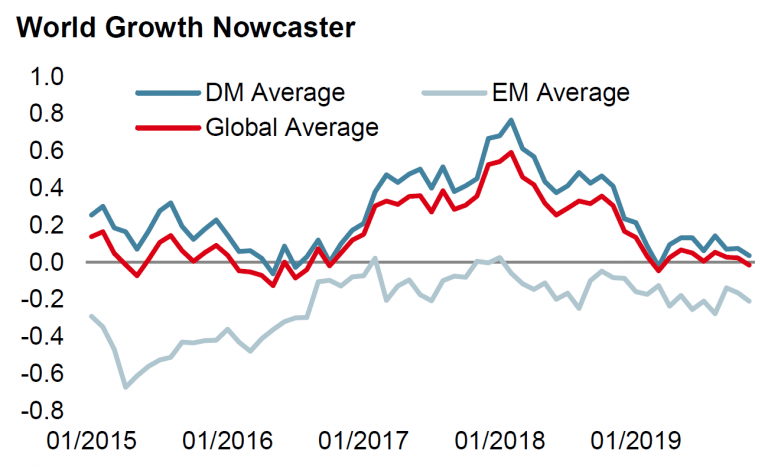 A year ago, tighter monetary policy, heightened political risks and decelerating macro forces wrong-footed investors as US stocks fell 20% over Q4 2018. Then, one after the other, these headwinds retreated exactly in the order they appeared, starting with monetary policy. US stocks reacted strongly, delivering a performance of around +32% since they bottomed. However, we believe the problem we are now facing is of a different kind: the current recovery has led many equity indices to look expensive. While we have been positive on stocks since early September due to macro stabilisation and overly pessimistic market sentiment, we are now not as positive as before. Is it time to call everything expensive and shop for assets based on their price tag, or are we likely to see a prolonging of this everything-rally period? We see a more limited upside from now, without changing our bullish positioning.

What's Next? What Recession?

Growth drivers have stabilised considerably since June, following the end of the slowdown that started in January 2018. The “mid-cycle” pause called by Fed Chair Jerome Powell has led to a one-of-a-kind situation: world growth remains decent while monetary policy has become once again incrementally more accommodative. This is due to an unlikely combination of factors. First, the trade war between the US and China led to a 3.5% net contraction in global trade between October 2018 and June 2019. Historically, contractions in global trade are reliable recessionary indicators. In 2001, global trade contracted by 6%, by 20% in 2008 and by 2% in 2015. Little wonder central banks adopted a change in tone from unwinding quantitative easing to further easing across the G10 world. The spectre of recession was looming and a prudent reaction was required. In the meantime, the Eurozone was indicating strong signs of deceleration, particularly in historically more robust economies such as Germany. But all of that is now behind us, or so it seems. Private sector economists expect the global economy to grow by 3.1%, 3% for the IMF and 2.9% for the OECD and the World Bank. Did someone say recession? The robustness of the growth has of course a lot to do with the solidity of developed world consumption: +2.6% this year in the US, +1.2% in the Eurozone and +0.9% in Japan. These numbers are dwarfed by +8% in China, but they provide a strong guarantee that we will not see a recession in 2019 or the beginning of 2020.

This satisfactory macro situation has been largely confirmed by corporate earnings this year. S&P 500 company sales have grown by more than 3% each quarter, while analysts expect Q4 to be a bottom before sales growth resumes above 4%. In the case of the Eurostoxx 600, sales grew every quarter by at least 1%.

The same holds true for many developed economies. Any earnings contraction witnessed this year came mainly from tighter margins.

Valuations are Higher than You Think

If valuations were attractive in early September, the current situation is different, in our view. Equities have rallied sharply since then, leading most regional indices into higher territories. Using a discounted cash flow model, we can turn the price of regional indices into a 12-month implied earnings growth rate. By doing so, we can judge the expensiveness of equities in relation to the current dynamism of the economy. What is the outcome of this analysis? A mixed picture: the MSCI World index needs to see its earnings growth reach 18% over the next 12 months, driven by US stocks now expecting 24% earnings growth and European stocks, 21%. These numbers are consistent with other valuation metrics: when looking at a cross section of indicators, US and European stocks are expensive. The S&P 500 index sits in its 87th valuation percentile across a large number of metrics. According to our estimates, this usually leads to a -4.5% correction over the following three months. The Eurostoxx index has now reached its 81st percentile: European stocks are no longer cheap and have now reached the valuation danger zone, similar to US stocks. Only emerging and Japanese stocks remain cheaper, with limited expected earnings growth.

Are equities the only asset at valuation risk? We do not think so. We look at valuation relative to other risk premia and history, based on carry. This analysis shows that credit (investment grade and high yield) spreads are historically tight. Indeed, most hedging instruments, such as government bonds, gold, inflation breakevens, the yen and the Swiss franc, are equally expensive. What makes this situation exceptional is that everything looks expensive to some extent: both hedges and growth-oriented assets. We think that current valuations are probably the number one risk to our still-positive scenario.

Sentiment could be the game changer. In the case of equities, high valuations could well become justified by continued macro improvement. If price/earnings ratio expansion becomes justified by strong earnings growth, then the equity rally will continue and hedging assets will be at risk in the coming months. Why is that so? Mainly because the last leg of this year’s equity rally happened with a low participation rate: cash remains king for now in spite of low-to-negative rates. According to our estimates, the multi asset fund industry’s beta to equities remains lower than a year ago, highlighting a lack of investor conviction. Nothing grows forever but earnings growth is likely to continue over Q4 this year and into Q1 2020. If we are right and investors get caught in this late equity fever, the rally is not over yet. This valuation risk has only created a more limited upside potential for now unless we see a large and ample growth improvement.

That is where the surprise could come from. Analysts have, on average, a very different view of earnings growth. Throughout the year, their growth forecasts for earnings have decreased continuously (as usual), reaching zero to negative values. On average, analysts are expecting a profit stall. Expectations are most negative for emerging stocks - analysts expect a 10% contraction in profits in 2019. In the case of Europe, this number is around 0.5%, and 2% in the US. Should these expectations be proven wrong, valuations would be amply justified. For all these reasons, we maintain our positive stance towards growth assets and will probably do so until we see a material deterioration in the growth situation. We have started adding hedges against a fall in equities. Yet, given the fact that investor hedge positions are still large, we still expect a constructive investor attitude in the event of a drop in equities.