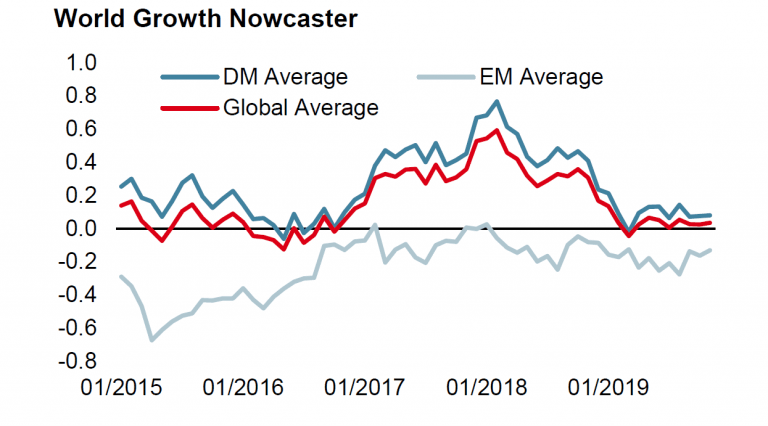 October began in the shadow of highly negative expectations but ended on a positive note, as key dangers were avoided. At the start of the month, fears of recession were making headlines, expectations of central bank action were high while geopolitical stress was elevated due to Brexit and trade war tensions. In addition, US corporate earnings for Q3 were released in the face of growing pessimism. However, these pockets of risk have since receded, feeding the bulls with fresh vitamins to prepare for the cold months ahead. Both risky and hedging assets have enjoyed the ride but rotation, dispersion, and correlation distortions have started to appear in numerous asset classes, leaving us with questions to answer. Will this trend continue, which assets will end up flying to the moon, and how can we position ourselves for the final 40 trading days of the year?

Economic conditions have continued to stabilise and consolidate around potential levels in October, with the number of improving data prints increasing through the month. Our proprietary Growth Nowcaster indicates that global economic activity is growing moderately but far from recessionary levels. We have observed this stabilisation for more than six months now without any signs of deterioration, both in developed and emerging countries, and we remain comfortable with the quality of the signal. Our assessment has been validated recently with a higher-than-expected US quarterly GDP at a 1.9% annualised growth rate, broadly unchanged versus Q2. Naysayers will argue that the breakdown is worrying given that only consumer-based measures contributed positively, while other components were more muted. The weakness in investment can be attributed to an escalation in trade tensions over the summer. If true, any improvement on that front will have a positive impact on soft data and capex, which could push growth above 2% in the near term. The consumer is therefore getting most of the attention these days and as long as employment data remains firm, the long-lasting effects of a benign job market will continue to be favourable for growth. Elsewhere, early signs of improvement are a source of hope in Europe, particularly France and Italy, while China shows signs of strengthening from below-potential levels.

...Thanks to Central Bank Action

October also saw another round of hotly anticipated central bank meetings. The Fed, ECB, BoJ and others adjusted their monetary policy stances, and largely delivered on investors’ expectations to keep monetary support alive for longer. Ample accommodation remains in place to sustain growth and revive inflation, which remains the missing part in the equation. Mario Draghi left the ECB against a mixed backdrop with both growth and inflation undershooting the bank’s target, but having avoided a major systemic breakdown and recession.

Fed President Jerome Powell very recently delivered the third and possibly last of his so-called “mid-cycle adjustment” rate cuts. He and his fellow FOMC colleagues contend with acceptable economic growth and sound employment data on one hand and undershooting inflation, industrial slowdown and trade risks on the other. We consider that central banks have adjusted their policies pragmatically, achieved their goals, and will now need to observe the effects of monetary support over the quarters to come. Looking forward, we do not expect headwinds from policy makers, who should maintain their accommodative stances unless they start posing risks of overheating economic activity, or inflation. The latter is still nowhere to be seen and represents another positive for risk-taking.

Concerns around Brexit, trade, Middle East tensions and Q3 earnings have all waned over the course of the month, improving market sentiment. The great wall of worry has disappeared and paved the way for gradual increases in risk appetite throughout October. Odds of a hard Brexit have substantially diminished, although election risks will now take centre stage. Trade tensions between the US and China subsided as well, with both parties finally showing the will to compromise. Skies have cleared on the micro front too. More than 80% of S&P 500 companies that have reported Q3 results thus far have beaten earnings expectations. In Europe, 61% of Stoxx 600 earnings are better than expected, an improvement from previous quarters in spite of absolute negative earnings growth. Owing to strong initial pessimism, companies beating expectations were better rewarded than poorer performing ones were punished. Altogether, global stock indices reached new all-time highs in October, with a return of +2.7% for the MSCI All Country and more than +20% year to date.

Meanwhile, the Volatility Index (VIX) dropped from 20% early in the month to 13% on October 31st. Hedging assets (government bonds) weakened accordingly: 10-year treasury yields rose to three-month highs of 1.86%, while broad sovereign indices lost 0.45% in total return terms, ending lower for the second month in a row. Under the surface however, rotation and correlation distortions have been at work for a couple of months and these will have to be monitored closely to optimise allocation decisions and avoid being caught in unwanted style reversals. Lately, the rise in real yields has finally started to trigger outperformance in value and high dividend stocks versus growth and momentum styles, which had massively outperformed earlier in the year. The same applies to emerging stock indices, which outperformed their developed peers, posting 4.18% and 2.8% respectively. The quest for increased carry, improvements in macroeconomic and geopolitical conditions and a weakening US dollar helped buoy emerging assets. In contrast, low volatility equity strategies suffered from the repricing in duration and the surge in risk appetite, while high yield credit undershot its historical beta to stock indices as rich valuations and extreme crowding weighed on demand for the asset class.

The combination of tepid but improving growth, low inflation, supportive central banks and decreasing risks creates, in our opinion, a very favourable environment to maintain higher exposures to growth-related asset classes while seeking carry opportunities. However, given style rotations and correlation distortions, our preference within risky assets goes to equities and selective portions of the credit and volatility universes. In contrast, supportive central bank policies and lower recession risk pricing lead us to underweight government and inflation-related securities. Within the equity space, we still consider emerging market assets as a potential outperformer while we see current dividend growth pessimism as an opportunity, which we implement on an opportunistic basis.

Listen to: Fly Me to The Moon by Frank Sinatra