Marathon Petroleum has announced plans to separate its Speedway brand and create a special committee to examine “value-creating options” for the midstream business, caving in to activist pressure to break up the business. The company also announced that CEO Gary Heminger will retire in 2020 after spending 45 years at Marathon, including the last eight at its helm.

The news comes after Elliott Management urged Marathon to separate into three companies, arguing that its retail, midstream, and refining operations have few synergies and would enjoy “significant upside with independent management.” D.E. Shaw Investment Management reportedly backed Elliott’s proposals and joined discussions with the refiner’s top echelon on future strategy and a potential replacement for Heminger.

Separately, a pair of former directors at Andeavor, a refiner acquired by Marathon last year, called for Heminger’s removal. Paul Foster and Jeff Steven argued that management had to do more to address the firm’s “stagnation and destruction of value” and signaled their support of Elliott’s breakup plan.

Two years after deeming Akoustis Technologies' core patents “obsolete,” Mako Research returned with another short report, alleging that the firm is bound to succumb to competitive pressures. The short seller claimed that Akoustis has repeatedly under-delivered over the last three years due to its old technology and mismanagement, contending that  Akoustis lacks the resources to displace its much larger and “well-established” competitors.

Mako first revealed its bet against Akoustis in August 2017, claiming that the firm’s core patents are "obsolete." Months before that, The Street Sweeper alleged that Akoustis "is based on a 17-year-old patent for a filter designed to help carriers improve battery life and cut dropped calls [and] current technology has left Akoustis’ patented technology in the dust.”

The number of Canada-based companies publicly subjected to activist demands between January 01 and November 01 in respective years. 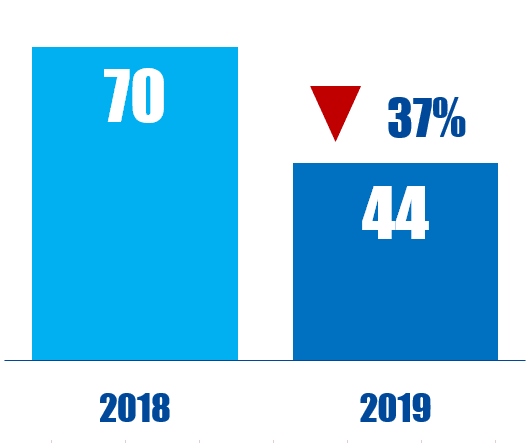