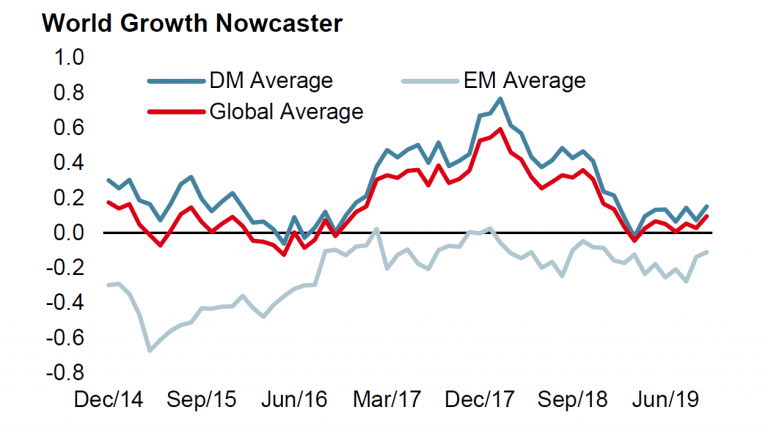 Over the last few weeks, many of the risks that have been weighing on investors’ minds, including our own, have shown signs of moderating. A combination of resilient growth, monetary and fiscal policy, and a de-escalation of geopolitical tensions have calmed these headwinds, even if they may not all be tailwinds quite yet. At the same time, investors seem to remain defensively positioned, creating fertile ground for risky assets to outperform should the tailwinds materialise. While we do not believe the risks have dissipated entirely yet, we do believe the risk-reward favours holding risky assets and harvesting carry in investors’ pursuit of happiness.

Growth Has Shown Resilience and Benefited from Policy Support

We have been communicating for some months now that global macro conditions are modestly supportive for risky assets. Since April of this year, our global Growth Nowcaster has remained steady at around potential levels, indicating that in aggregate the global economy is growing at a decent rate. This rate of growth does not eat into capacity constraints or increase slack in the economy, and is therefore a favourable environment for growth-oriented assets. In previous periods when our Growth Nowcaster was hovering around potential, global equities rose 0.9% on average (in total return terms) over the following month and posted positive returns in 62% of those months. Unsurprisingly, this is in line with their long-term behaviour (0.8% total return with 63% of the months positive). Importantly, there is a recent pickup in growth evident in both developed and emerging economies and our Growth Nowcaster diffusion index – which measures how much data is improving versus declining – points to upward growth momentum.

The weakest components recently have been the “soft data,” or surveys such as purchasing manager indices that are susceptible to dour sentiment due to uncertainty. These are also the first components to shift when uncertainty is reduced. Interestingly, when examining the “hard data,” the picture is more positive. At the end of 2018 and into early 2019, the data suggested the impact from trade uncertainty was flowing through to the real economy, with various measures of global trade worsening. The turn in global monetary policy from tightening to easing has worked reasonably well since then, as it appears to have largely offset the slowdown, though with a lag. Stimulation measures on the part of Chinese policymakers have also helped to support the domestic economy, which is the largest contributor to global growth. The result of this confluence of monetary and fiscal policy has been resilient consumption and supportive financial conditions for the global economy, not the recession some had feared just a few weeks ago.

Monetary Policy is Unlikely to be a Headwind for Some Time

This past week saw the ECB confirm its accommodative policy stance as Mario Draghi’s tenure as President of the ECB comes to an end. While taking over the reins of a globally critical central bank can lead to a change of mind (e.g. Jerome Powell), Christine Lagarde is expected to continue the ECB’s current support when she takes over as President next month. In the US, we expect the Fed to cut interest rates by another 25bps next week when the FOMC meets. The cut is well-priced by the market (90% likelihood) and Fed speakers have given no indication they will not cut, although forthcoming forward guidance could be interpreted as hawkish by the market if it shifts from an accommodative tone to a more patient, data-driven one. Nonetheless, market consensus seems to be coalescing around this week’s probable cut being the last of the “mid-cycle adjustments,” with the odds of additional cuts after this week fading. Thus, while monetary policy many not be the strong tailwind it has been for most of this year, it is also unlikely to turn into a headwind in the near term, as any tightening would require clear signals of a global economic recovery and strong reflation. Moreover, the market does not seem to be overly optimistic about additional monetary support.

A key reason why policymakers and investors see less need for monetary support is the more positive picture for global trade. In addition to the efficacy of steps already taken by central banks, recent weeks have seen a thawing of relations between the US and China. To be clear, we expect trade uncertainty and broad tension between the world’s two largest economies to continue for some time. However, currently both sides are showing a willingness to make a deal, even if it is unlikely to be a grand bargain. Such an event would be positive for risky assets, as it would reduce to a degree one of the primary sources of uncertainty of the last two years.

One other long-standing source of uncertainty also looks to be closing in on a resolution: Brexit. Last week, the UK Parliament signalled its willingness to get a deal done when it voted for the withdrawal agreement, though the timing of a needed extension has yet to be resolved. Nonetheless, the possibility of a no-deal Brexit or prolonged uncertainty has become much less likely.

The Pain Trade Remains to the Upside

An environment such as the current one, with stable growth, supportive monetary policy and declining uncertainty is fertile ground for risky assets. Investors still seem to be positioned cautiously, with hedging assets and downside protection bid up, suggesting that if there were a market rally, it would be supported by investors shifting back into growth-oriented assets. Collecting carry in this environment is also attractive, as current defensive positioning in the market should keep sell-offs relatively muted. Nonetheless, we are not so naïve as to think that all risks are properly priced by the market, but we prefer to exploit any such mispricing via optional structures or opportunistic trades as our central scenario remains positive.