WASHINGTON, DC – As candidates vie to set the agenda for the next presidency, Democratic primary voters in Iowa, New Hampshire, Nevada, and South Carolina strongly support a tough approach to oversight and reform of Wall Street, according to a new poll conducted by the bipartisan team of Lake Research Partners and Chesapeake Beach Consulting.

The views of these voters, whose decisions will influence the early trajectory of the race for the Democratic nomination, align with Democrats and independents broadly, and on many questions, a majority of Republicans. And these Americans take a dim view of the rollback of rules pursued by Trump-appointed officials.

Americans see the need for tough enforcement of existing rules, even after hearing opposing arguments that stress a danger in the role of government. They strongly support the 2010 Dodd-Frank law that Congress passed in response to the financial crisis, as well as additional measures to fight continuing industry abuses.

A memo on the poll results is available here, and is attached. The full results for early states are here, and for the entire country here.

"The memory of the financial crisis and subsequent recession has been searing, but Wall Street's behavior since they has also given voters every reason to want a tougher approach," said Lisa Donner, executive director of Americans for Financial Reform. "From Wells Fargo's abuse of its own customers, to private equity looting, to the dangerous impact of the money the industry has injected into the political process, Wall Street itself makes the case for why we need more, not less accountability, and deeper change."

The survey also shows broad support for the Consumer Financial Protection Bureau, a marquee accomplishment of Dodd-Frank that Congress created in order to police the marketplace on behalf of ordinary people. But, they have deep concerns about the direction that the new leadership is taking this vital agency.

“Americans living outside the Beltway have not forgotten the financial crisis. They are still living with its effects, from missing the wealth-building of homeownership to lost retirement savings, damaged credit scores, and years of lower wages,” said Mike Calhoun, president of the Center for Responsible Lending. “It’s no wonder then why folks understand the importance of strong safeguards for Wall Street and why this is a popular issue with voters.” 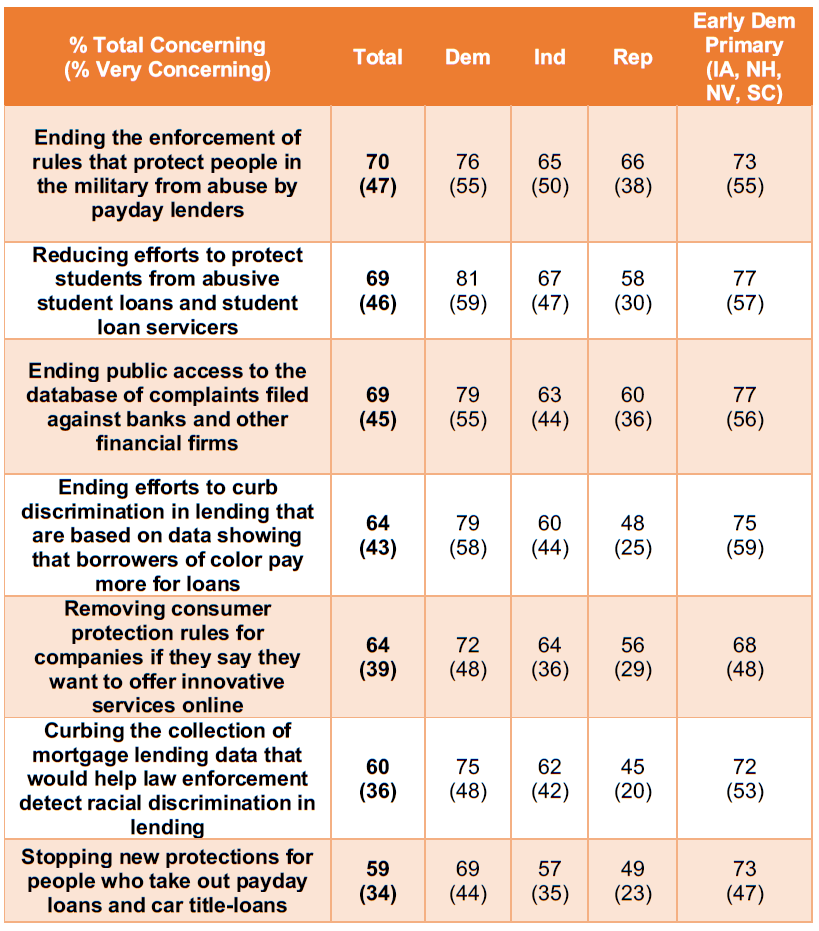