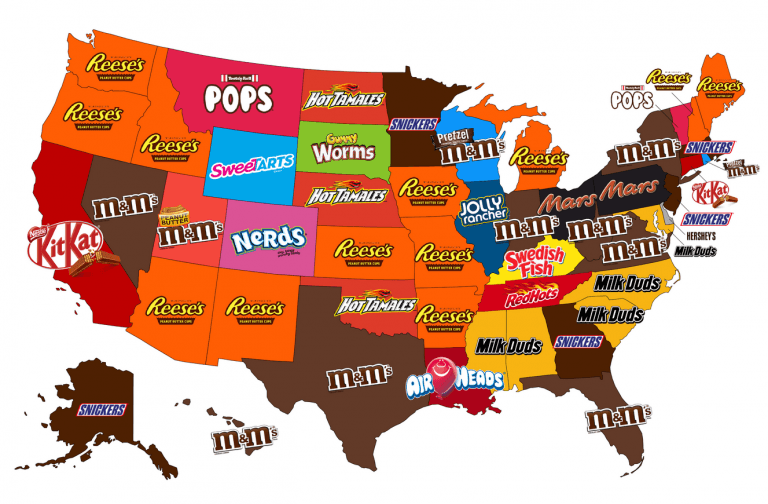 October is here and that means Halloween is rapidly approaching. What better to get excited about this spooky holiday by looking at the most popular Halloween Candy in each state for the United States.

Bid-On-Equipment recently analyzed this data by crunching some numbers and a whole lot of candy! The study went on to examine the most popular Halloween Candy in each state as well as most popular candy in 20 of the most populated American cities.

Using Google AdWords to analyze a year’s worth of Google search trends data, Bid-On-Equipment looked at search trends for over 100 different types of popular Halloween candy bars. They also surveyed over 2,000 American’s to find out only their most favorite type of Halloween candy, but also to find the answers to controversial Halloween questions including the ideal time for trick-or-treating, the age in which kids should stop trick-or-treating, how much the average American spends on Halloween candy and whether or not Halloween should be moved from October 31st to the last Saturday in October.

Let’s take a look at some of the takeaways from the halloween candy study:

As far as the most popular Halloween candy in the United States? That honor wen to regular M&M’s followed by Snickers and Kit Kat bars. On the state level, Snickers was the most popular candy choice with 12 states choosing it as their favorite type of Halloween candy. Airheads, Nerds, SweeTarts, and Gummy Worms are the least popular. M&M’s were also widely popular in some of American’s largest cities. Large cities like New York City, San Antonio, San Diego, Fort Worth and Columbus all named M&M’s as their most favorite type of Halloween candy. The full analysis that includes a state by state breakdown as well as a breakdown of the largest cities in the U.S. can be seen below.