A couple of weeks after unveiling the OnePlus 7T, Chinese vendor OnePlus has taken the wraps off the OnePlus 7T Pro. The ‘T’ variants are mid-cycle upgrades, and bring only minor changes. The new 7T Pro will be competing with Apple’s iPhone 11 Pro, which has been flying off the shelves since its launch in September. Let’s check out how the OnePlus 7T Pro stacks up against the iPhone 11 Pro.

The 7T Pro’s design is nearly identical to the OnePlus 7 Pro that was released a few months ago. It has a notch-less and bezel-less design with a pop-up selfie camera. The screen is curved on the sides. The OnePlus 7T was introduced with a circular camera setup on the back. But the 7T Pro has a vertically aligned triple camera setup.

The OnePlus 7T Pro lacks the 3.5mm audio jack. Also missing from the device is an IP rating for water-resistance, though it does offer splash resistance. The front and back glass panels are supported by an aluminum frame in the middle. It has dual stereo speakers with noise-cancellation to enhance the audio experience.

The new OnePlus phone measures 162.6 x 76 x 8.8 mm and weighs 206g. It’s larger and heavier than the iPhone 11 Pro. The device is available only in two color options: Haze Blue and Papaya Orange.

The papaya orange color is exclusive to the OnePlus 7T Pro McLaren Edition. The McLaren Edition is more expensive than the standard model. It offers a higher RAM, McLaren’s signature color, and is made of a new Alcantara fabric material.

The 7T Pro features an optical in-display fingerprint sensor for authentication and security. In contrast, the iPhone 11 Pro gets Apple’s Face ID technology. The iPhone 11 Pro also lacks the 3.5mm audio jack. The new iPhone comes with an IP68 rating for water and dust-resistance. Both devices don’t allow users to expand storage.

The iPhone 11 Pro looks similar to last year’s iPhone XS. It has a wide notch at the top to accommodate the ear speaker, selfie camera, and Face ID sensors. On the back panel, it features a square camera module to house three lenses and an LED flash.

The new iPhone has premium glass panels on the front and back supported by a metal frame in the middle. It measures 144 x 71.4 x 8.1mm and weighs 188g. It’s much more comfortable to hold in hand than the OnePlus flagship, but it also has a smaller display. The iPhone 11 Pro comes in Gold, Silver, Space Grey, and Midnight Green colors.

The OnePlus 7T Pro has the same display as its predecessor. It gets a 6.67-inch Fluid AMOLED display with HDR10+ support and a 90Hz refresh rate. It has a resolution of 1440 x 3120 pixels. The device offers a 19.5:9 aspect ratio and 516ppi of pixel density. The display is protected by Corning’s Gorilla Glass 6. OnePlus has added a Night mode, Reading mode, and Video Enhancer.

The iPhone 11 Pro has a relatively smaller 5.8-inch Super Retina XDR display. Its resolution and pixel density are also lower than the 7T Pro. It has 1,125 x 2,436 pixels resolution with 458ppi of pixel density. Apple’s device offers a peak brightness of 800 nits. It comes with HDR support and Apple’s True Tone technology, which optimizes the display brightness and color based on ambient lighting.

The McLaren Edition gets 12GB RAM and 256GB of onboard storage. OnePlus is offering only one storage option on the phone. The 7T Pro runs OnePlus’ custom OxygenOS 10 skin on top of Android 10 software. The OxygenOS 10 brings new customization options, landscape app switching, an updated Zen mode, and more.

The Chinese company also announced a partnership with PUBG Mobile. The game will be further optimized for the new OnePlus handsets.

The iPhone 11 Pro runs Apple’s custom A13 Bionic chipset, which is by far the most powerful smartphone processor. No other chipset comes even close. It also features Apple’s third-gen Neural Engine. Apple doesn’t like to reveal the RAM on its phones, but third-party teardowns suggest the iPhone 11 Pro packs 4GB RAM.

The OnePlus 7T Pro features a 4,085mAh battery, which should easily get you through more than a full day of normal usage. It supports OnePlus’ new Warp Charge 30T charging technology. It’s 23% faster than the Warp Charge 30, which came with the OnePlus 7 Pro. The 7T Pro charger delivers up to 70% charge in just 30 minutes.

The iPhone 11 Pro features a 3,046mAh battery. Since Apple controls both hardware and software of its smartphones, it can tightly integrate them to offer a good battery life even with a decent battery capacity. It ships with an 18W fast charger, which delivers 50% charge in just 30 minutes. The iPhone 11 Pro supports wireless charging, which is missing from the OnePlus flagship.

The OnePlus 7T Pro features an excellent triple camera setup on the back. It houses a 48MP primary lens with OIS and f/1.6 aperture; a 16MP ultra-wide angle lens with 117-degree field of view and f/2.2 aperture; and an 8MP telephoto lens with f/2.2 aperture, OIS, and 3x optical zoom. For selfies, the OnePlus flagship has a 16MP pop-up camera that comes up whenever needed. The phone is capable of recording 4K videos at 60fps.

OnePlus has improved the camera performance via software tweaks. The 7T Pro gets a new Macro mode that allows you to capture close-up photos of small objects that are as close as 2.5cm from the camera.

It offers up to 10x digital zoom, 2x optical zoom, Night Mode, Smart HDR, and Portrait Mode. It is capable of recording 4K videos at 60fps and 1080p footage at 60fps. It also supports optical image stabilization for videos.

OnePlus didn’t announce if or when it would release OnePlus 7T Pro in the United States. The device is set to launch in Europe, India, and China. In the UK, it will go on sale on October 17th. The device has been priced at £699 in the UK. The McLaren Edition will arrive on November 5th with a price tag of £799. In the US, the Chinese company is releasing the OnePlus 7T on October 18th, which costs $599.

The iPhone 11 Pro has been priced at $999 for the base model with 64GB storage. The 256GB variant costs $1,149 while the 512GB model costs $1,349. Apple is currently running a trade-in program that significantly brings down the price of the phone depending on your current device.

The OnePlus 7T Pro brings only minor changes over the OnePlus 7 Pro. It has a slightly faster charging, a faster processor, and the macro camera mode. It’s far more affordable than the iPhone 11 Pro while offering comparable features. But the US consumers can’t get their hands on the 7T Pro. If you want to buy a OnePlus flagship, you can get your hands on the OnePlus 7 Pro, which was released in the US only a few months ago. 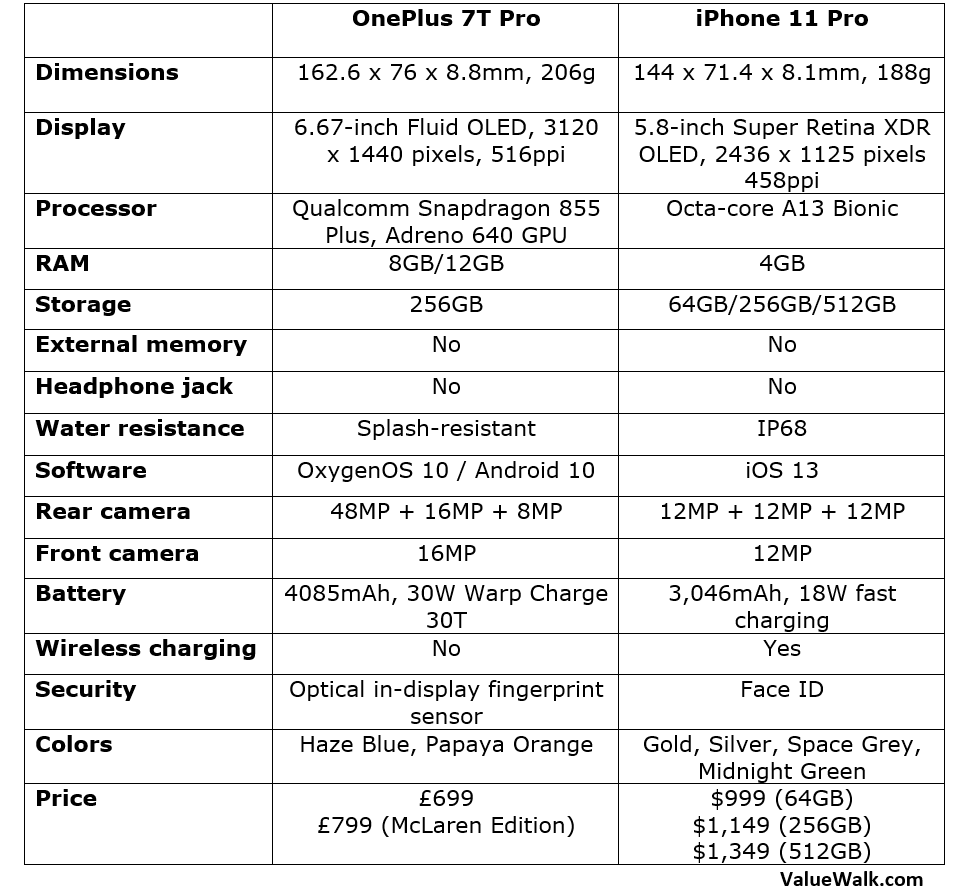