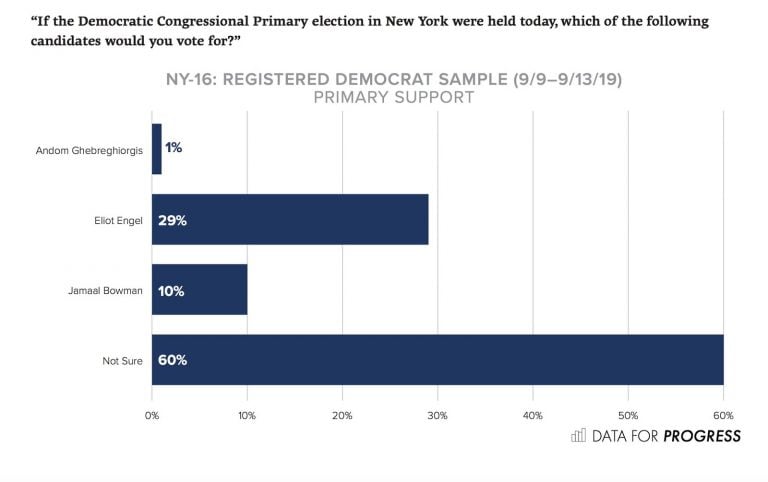 A new poll from Data for Progress shows six-in-ten registered Democrats in New York’s 16th District are undecided on who to vote for in the 2020 Democratic primaries for Congress.

When registered Democrats were asked who they would vote for if the primary were held today, 60% of respondents said they weren’t sure, 29% said Engel, and 10% were for Bowman. The poll also showed Andom Ghebreghiogis at 1%. Respondents who said they were “definitely not” going to vote in the upcoming congressional primary were excluded.

“It’s a result of Jamaal Bowman’s campaign’s ability to fundraise from small-dollar donors and from investing early in engaging voters and building a coalition,” said Alexandra Rojas, executive director of Justice Democrats. “He gets some added name recognition from the fact that I’ve seen him get stopped in the street by someone shouting ‘Yo, Mr. Bowman!’ People know him.’”

“Our central finding is a field in flux, which isn’t uncommon nine months out,” the report says. “Six in ten registered Democrats are undecided, and under a third are firmly in Engel’s camp.Jamaal Bowman has been able to break through more than Ghebreghiorgis, and commands more support in the horserace and higher name identification.”

This poll stands in stark contrast to internal polling conducted by Joe Crowley that showed him 36 points ahead of Alexandria Ocasio-Cortez weeks before the 2018 congressional primaries in New York.

Half of registered Democrats in the 16th identify themselves as “very liberal” or “liberal.”

Jamaal Bowman lives in Yonkers, New York and is a middle-school principal in The Bronx and a leader in the education justice movement. He has been endorsed by Justice Democrats and former New York gubernatorial candidate Cynthia Nixon.