ValueWalk
Home Politics New study shows illegal immigration linked to crime (But not how you... 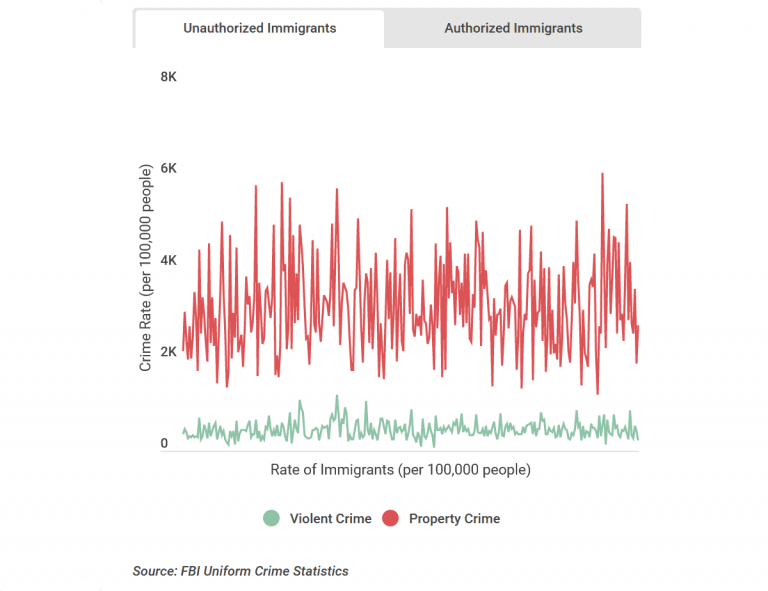 The American public and American policymakers take it for granted that illegal immigration is a problem. In fact, in 2019, more people than ever before consider illegal immigration the biggest problem facing the country, according to a recent Gallup poll. After all, it’s right there in the name: it’s illegal, so how could it be anything but a negative?

Of course, that was the attitude towards marijuana for much of the past century. But as of this year, 44 states have legalized marijuana to some degree, and taxed sales are in the billions. Social attitudes towards marijuana changed, while the powers that be realized there huge economic benefits there. Could illegal immigration be a similar case? An intriguing recent study by Clever Real Estate suggests so.

First, some definitions. The U.S. immigrant population has been growing rapidly, from 12.5% of the population in 2007 to 15% in 2016.  The illegal immigrant population has slightly declined over that time, from 4% in 2007, to 3% in 2016. Over that period, the U.S. has seen precipitous drops in crime and unemployment rates, and impressive GDP growth. Crunching the numbers suggests these big picture trends hold up on a micro level.

A Correlation Between Immigration and Increased Home Prices

Both legal and illegal immigrants have a positive, measurable impact on home prices. Using regression analysis, and controlling for population and cost of living, the study found that home prices improved one dollar for every seven additional unauthorized immigrants per 1,000 residents, which translates to $0.14 per immigrant. To put it in concrete terms, if a metro area with a median home value of $150,000 sees in influx of 100,000 immigrants, home prices would increase by around 9%, to $164,000. However you might feel about immigration, you should tip your hat to it when you sell your house.

Part of this price increase probably reflects more demand, as more people move to an area, but much of it reflects the on-the-ground economic situation. Legal immigration, especially, brings an economic boom. Foreign-born citizens are much less likely to be unemployed than native citizens or immigrant residents, who have similar rates of unemployment, and foreign born citizens have significantly higher median incomes than both of those groups. They’re also more likely to be self-employed, which means they’re more likely to create jobs.

But Which Came First?

This research suggests, like other findings, that both legal and illegal immigrants are a net positive for the economy. However, it doesn’t solve the “chicken or the egg” problem, i.e. are immigrants catalyzing economic development, or simply emigrating to areas that are already experiencing positive growth? After all, 60% of all immigrants live in 20 metro areas, so it’s possible they simply gravitate towards opportunity. But other research suggests that immigrants are directly and indirectly responsible for the economic development that follows their arrival.

Research by the New American Economy Research Fund shows that immigrants have not only added $3.7 trillion in U.S. housing wealth, but they’ve also helped revive rural economies, as seen in places like Iowa. They’ve also had an indirect, albeit troubling, effect on metro home prices; as more immigrants settle in a neighborhood, native habitants often move to outlying areas, spurring growth and increasing home prices in their new neighborhoods.

A lot of the negative myths about illegal immigration don’t hold up to scrutiny. For example, excluding immigration-related charges, undocumented immigrants don’t commit crimes at a higher rate than all U.S. citizens. Performing regression analyses on 146 metropolitan statistical areas across the U.S.  found no relation between the presence of immigrants, regardless of documentation, and the rate of property and violent crime.

While overall crime did decline in El Paso, it decreased at a much lower rate than in the U.S. overall. Los Angeles and Phoenix also saw slower declines in crime than the rest of the country (with some categorical exceptions), even as their immigrant populations were plummeting, while rapes increased by 72% in L.A. and 63% in Phoenix. These findings largely reinforce previous research from the Cato Institute that found that immigrants are less likely to commit crimes than native citizens.

And finally, one of the most persistent objections to immigration is the idea of public assistance income acting as a drag on the economy. The statistics showed that, while non-citizen residents received slightly more public assistance than native or naturalized citizens, native citizens received more supplemental security income than naturalized citizens or non-citizen residents, meaning that, on average, native U.S. citizens and unauthorized residents receive similar levels of government assistance income.

A Perception Problem, Not a Social One

More and more studies are finding that immigration, both legal and illegal, is a net gain for economy and society. Yet, recent polling shows that native citizens regard it as one of the most serious threats to the country.  Taken together, this suggests the problem here is one of perception, and not substance. Immigration advocates can take heart by looking at the marijuana cause; just a few years ago, people were being sent to prison for decades on marijuana charges, while in 2019, a former Republican Speaker of the House is now lobbying for its decriminalization. Perceptions can change fast, especially when there’s money involved.