ValueWalk
Home Technology Google Pixel 4 vs iPhone 11 Pro: Which one has better specs?

After a plethora of leaks over the last several months, Google officially confirmed what most fans already knew about its Pixel 4 and Pixel 4 XL smartphones. The search engine giant unveiled a bunch of new hardware products – including the Pixel 4 and Pixel 4 XL – at its Made by Google event on Tuesday. The new Pixel phones will be competing directly with Apple’s iPhone 11 series. In this Google Pixel 4 vs iPhone 11 Pro comparison, let’s check out which one has better specs.

Google has changed the design language with the new Pixel phones. Gone is the two-tone finish on the back panel. The Pixel 4 has a thick bezel at the top of the screen to accommodate the ear speaker, selfie camera, and the facial recognition sensors. It also has a slim bezel at the bottom of the screen. It has the volume rockers and power button on the right side.

The Pixel 4 has a USB-C port at the bottom for charging. It lacks the 3.5mm headphone jack. The device measures 147.1 × 68.8 × 8.2 mm and weighs 162g. On the back panel, it features a square camera module to house two lenses. There is no fingerprint sensor on the back because Google uses 3D face unlocking similar to Apple’s Face ID technology.

The front and rear glass panels of Pixel 4 are protected by Corning’s Gorilla Glass 5. It has stereo speakers to deliver crisp and clear audio. The device also gets Google’s Active Edge feature, which allows users to summon Google Assistant by squeezing the frame of the device.

Both the Pixel 4 and iPhone 11 Pro come with an IP68 rating for water- and dust-resistance. The iPhone 11 Pro features the familiar notch that we’ve seen on the older iPhones. The notch houses the Face ID sensors, front-facing camera, ear speaker, and other sensors. Just like Pixel 4, the iPhone 11 Pro lacks the 3.5mm audio jack.

On the back panel, the iPhone 11 Pro also has a square camera module. But it gets three lenses along with an LED flash. Its front and back glass panels are supported by a metal frame in the middle. The iPhone 11 Pro measures 144 x 71.4 x 8.1mm and weighs 188g.

The Pixel 4 has a 5.7-inch AMOLED display with Full HD+ resolution of 2,280 × 1,080 pixels. It offers 444ppi of pixel density and a 19:9 aspect ratio. Google has added a blazing-fast 90Hz refresh rate, which it calls Smooth Display. The fast refresh rate makes scrolling, gaming, and video watching more enjoyable on the Pixel 4.

The new Pixel phone also has the Ambient EQ support, which automatically adjusts the display brightness and color temperature depending on the ambient lighting.

The iPhone 11 Pro has a 5.8-inch Super Retina XDR display. It has 1,125 x 2,436 pixels resolution with 458ppi of pixel density. Apple’s device offers a peak brightness of 800 nits. It comes with HDR support and True Tone technology, which optimizes the display brightness and color based on ambient lighting.

The Pixel 4 packs 6GB RAM and 64GB or 128GB of internal storage. It doesn’t support external storage. But Google gives users unlimited cloud storage for photos in high quality. It is powered by Qualcomm’s octa-core Snapdragon 855 processor. That’s quite surprising because Qualcomm has already made its slightly more powerful Snapdragon 855 Plus available to Android vendors.

The device runs the stock version of Android 10 out of the box. Pixel 4 owners can expect at least three years of security patches and software updates. Software is the biggest strength of Google’s smartphones. The AI assistant is deeply integrated into every aspect of the device. And Google Assistant is far superior to Siri.

The iPhone 11 Pro runs Apple’s custom A13 Bionic chipset, which is by far the most powerful smartphone processor. No other chipset comes even close. It also features Apple’s third-gen Neural Engine. Apple doesn’t like to reveal the RAM on its phones, but third-party teardowns suggest the iPhone 11 Pro packs 4GB RAM.

The Google flagship has a couple of new tricks up its sleeves. One of them is the Project Soli radar chip that enables gesture navigation. It allows you to control music playback, stop an alarm, take an incoming call, adjust volume, and perform other actions by waving your hand in the air.

The upgraded Google Assistant is now capable of responding to back-to-back interactive commands. You don’t have to say ‘Hey Google’ every time. The Pixel 4 also gets Google’s Active Edge technology, which lets you activate Google Assistant by squeezing the frame of the phone. Both these features are missing from the iPhone 11 Pro.

The iPhones and Pixel phones are known for their excellent camera capabilities. The Pixel 4 features a dual-camera setup on the back. It consists of a 12.2MP wide-angle lens with OIS and f/1.7 aperture; and a 16MP telephoto lens with OIS and f/2.4 aperture. The device is capable of recording 4K videos at 30fps and 1080p videos at up to 120fps.

For selfies, the Pixel 4 gets a single 8MP wide-angle lens on the front. The rear camera offers 2x optical zoom, but you can zoom in on subjects even further with Google’s Super Res Zoom feature. The Pixel 4 also has a Live HDR+ feature that shows you what the HDR+ image will look like in real-time rather than after taking the photo.

The Pixel 4 also has Dual Exposure controls to let you adjust the exposure in separate parts of the image. Other features including Night Sight, Portrait Mode, White Balancing, and a new Astrophotography mode for clicking pictures of the stars.

It offers up to 10x digital zoom, 2x optical zoom, Night Mode, Smart HDR, and Portrait Mode. It is capable of recording 4K videos at 60fps and 1080p footage at 60fps. It also supports optical image stabilization for videos.

The Google Pixel 4 packs a decent 2,800mAh battery, which should get you through a full day of normal usage. Google controls both software and hardware of Pixel devices, which allows it to optimize the software to deliver better battery life. It supports wireless charging as well as 18W fast charging.

Neither device is affordable. The Google Pixel 4 starts at $799 for the base model with 64GB storage. If you want the 128GB model, you’ll have to shell out $899. The new Pixel phones will go on sale on October 24.

The iPhone 11 Pro has been priced at $999 for the base model with 64GB storage. The 256GB variant costs $1,149 while the 512GB model costs $1,349. Apple is currently running a trade-in program that significantly brings down the price of the phone depending on your current device. 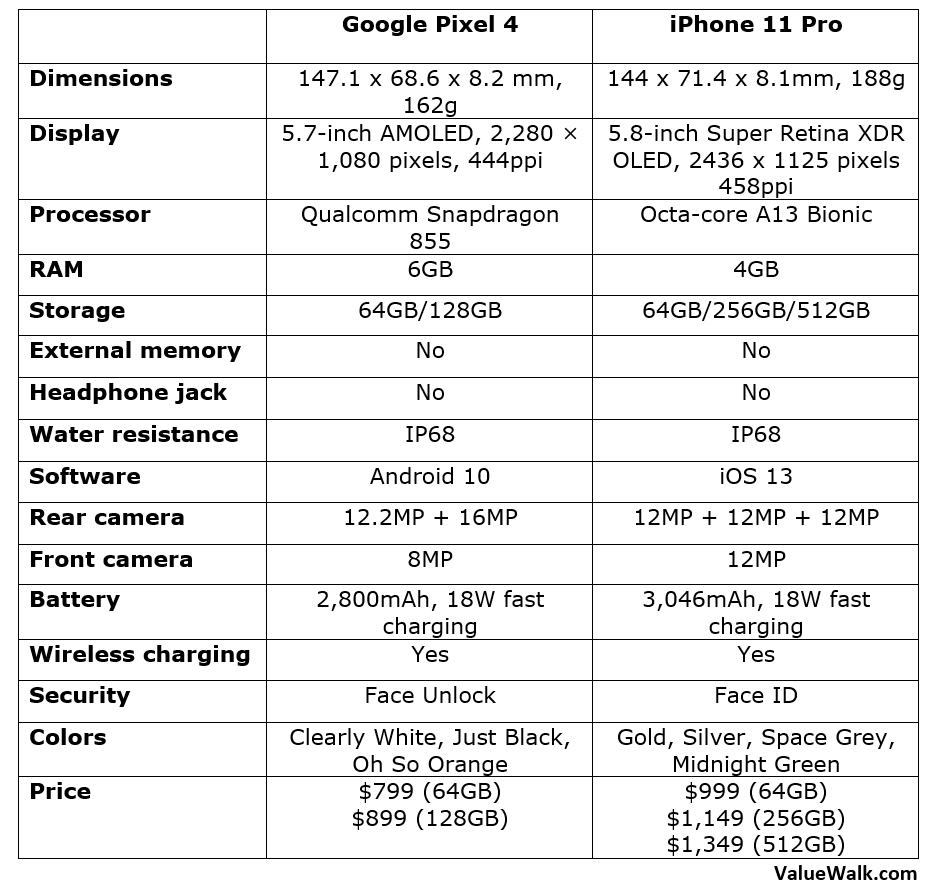