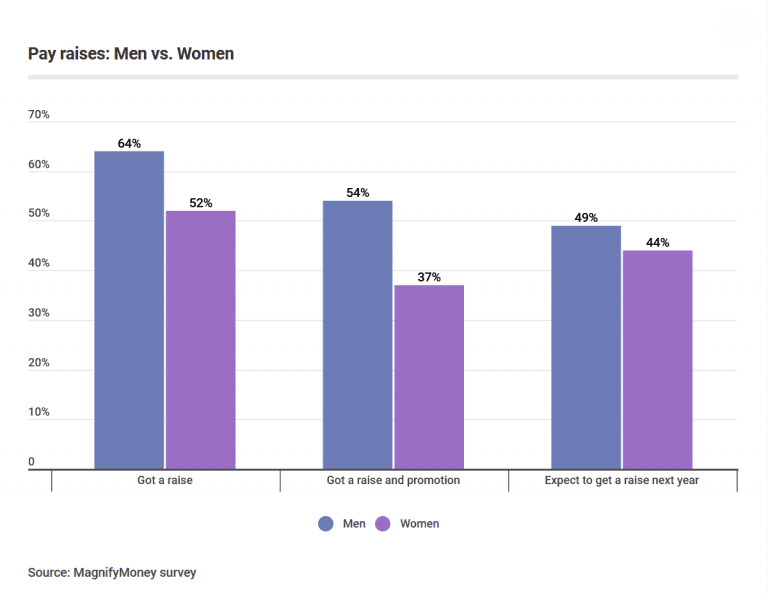 A recent MagnifyMoney survey has found that despite the fact that 59% of Americans received a pay raise in the last year, the extra cash still isn’t flowing equally to men and women. The MagnifyMoney data illustrates the stark gap that still exists between women and men when it comes to both pay raises and promotions.

MagnifyMoney found that 64% of men reported receiving a raise in the last year, compared to just 52% of women. The gender gap was even wider for promotions: The study found that 54% of men said their pay raise came with a promotion, versus only 37% of women.

Unsurprisingly, the findings also show a yawning gap in expectations about future prospects, with men more confident than women about their outlook for advancement in the next year..

The gender gap is not the only area where raises fail to be doled out evenly across demographics. The figures are a bit different depending on the generation you belong to as well.

For example, Baby Boomers are the only generation where less than 60% received a pay raise—in fact, more than half did not receive a raise in the past year. By comparison, only about a third of Millennials, and about 40% of Gen Xers, did not get a raise within the last twelve months.

MagnifyMoney, a LendingTree company, commissioned Qualtrics to conduct an online poll of 543 Americans who worked at least 30 hours per week. The survey lasted from September 5, 2019 through the September 9, 2019.