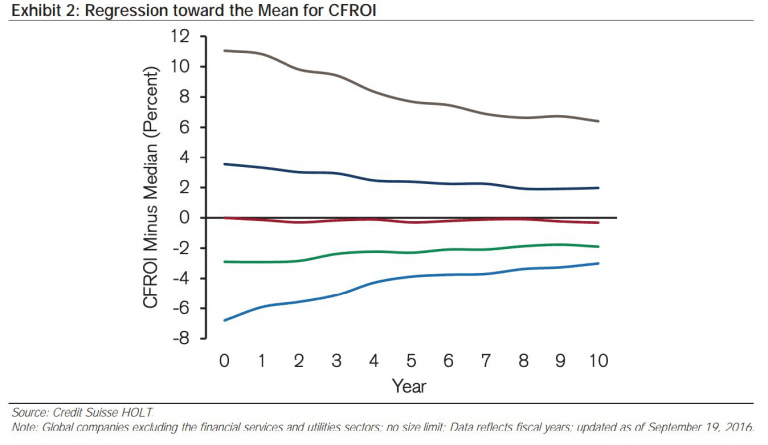 Farnam Street letter to investors for the month of OCtober 2019, titled, “On Investment Faith and Building a God Portfolio.”

But first, a fun thought experiment. What if you had perfect investment foresight? With a snap of my fingers, I grant you the power to look exactly five years into the future and see how every stock in the S&P 500 will perform. There are no surprises; you invest in the top 50 stocks that you already know will do the best. This superpower would have compounded your wealth at 29% per year from 1927-2016. You also get to avoid the 50 worst performers, which lose more than -15% per annum. Being an investment god sounds pretty neat, right?

Despite being a lock to crush it over every five-year increment, you still had to live through ten events where your God Portfolio was down more than -20%, and one where you were down more than -75%! It’s a bumpy ride to that 29% per annum. The average downward correction would take 317 days to bottom, and another 378 days to recover back to the previous high. These roughly once-per-decade crashes would have you feeling like you were floundering for two years at a time. Even with the advantage of clairvoyance, your patience would be tested. You would soon be asking yourself, “Am I still a god? Are these really the best performing stocks a few years from now? This is harder than it looks!” The path they take to the top of the heap is anything but linear.

What if you were running a hedge fund with this perfect foresight? You could be long the top decile performers and short the worst decile. Your compound annual growth rate jumps to 46.2% compared to the market’s 9.9% return. #DeityCapitalManagement

Yet even with perfect foresight and positioning, there are eight periods where your fund severely underperforms the market. On three occasions, you underperform the market by more than 50%. Your investors would lose faith in your abilities and you’d be fired. They’d abandon you for new oracles with better recent performance.

"A short focus is not conducive to long profits." -- Warren Buffett

The sobering takeaway of this thought experiment is that even if you could know the outcomes, investing requires a strong stomach and dreadfully long time horizons. The road to returns will always be paved with heroic conviction and mental flagellation. As Mr. Buffett repeatedly quips, “Investing is simple, but it isn’t easy.” There’s a lifetime of thought baked into those seven words.

DALBAR is an organization which polls investors on their buy and sell decisions. They found the “retention rate data for equity, fixed-income and asset-allocation mutual funds strongly suggests that investors lack the patience and long-term vision to stay invested in any one fund for much more than four years.”

“I feel like I get paid for my strong stomach, rather than my exceptional analytical ability.” -- Joel Greenblatt

The Prayers of a Value Investor

What are value investors praying for?

Value investing is an implicit prayer to the gods of mean reversion. To buy a collection of assets or a cash flow stream for a discounted price requires a gloomy outlook. The more dismal the prospects, the cheaper the price. Value investors buy during periods of pessimism and then pray that other market participants will reevaluate the business and realize it wasn’t so bad afterall. The marketplace now prices those assets or earnings streams for a fair price, boosting the value investor’s returns. As James Grant observed, “Successful investing is having everyone agree with you… later.”

The flipside is also true; value investors don’t hold glamorously priced stocks for fear of a hiccup in business results triggering a painful reassessment and downward revision. (For a recent example, see: WeWork’s scuttled IPO.) The value investor seeks to capture the upward and avoid the downward drafts of mean reversion.

“The intelligent investor is a realist who sells to optimists and buys from pessimists.” - Benjamin Graham

We’ve spilled ink on this topic before: see the section in this letter on CAPE ratios and the impacts of mean reversion.

What’s the catalyst that causes others to reassess their sentiments? Said another way, what causes price to eventually match intrinsic value?

The unsettling answer is, we simply don’t know. And we’ll never know.

In 1955, Benjamin Graham testified to the Congressional committee on Banking and Commerce. This brief transcript cuts to the heart of the matter.

Chairman J. William Fulbright: What causes a cheap stock to find its value?

Benjamin Graham: That is one of the mysteries of our business, and it is a mystery to me as well as to everybody else. But we know from experience that eventually the market catches up with value.

As Tom Petty sang, “You take it on faith, you take it to the heart. The waiting… is the hardest part.”

Value investors don’t just bank on market sentiment reverting to a mean. There’s often a bet on reversion to the mean of the underlying business results. The percentage of businesses who can earn above average returns on their capital for a sustained period of time is shockingly small. Capitalism and technology don’t allow anyone to rest on their laurels for long.

An example from your own neighborhood might help. Remember around 2011 when cupcake shops were all the rage? The early movers who charged $4 for a fancy cupcake were making a lot of money. A few companies even IPOed on the idea of rolling out stores nationwide. Yet it didn’t take long for people being charged $4 for $0.25 worth of ingredients to think, “I could do that!” And so they did. Overnight, every empty retail space became a cupcake shop. There was only so much demand in your town for cupcakes. Competition became fierce; most of the shops were gone as quickly as they’d arrived. There would be no cupcake bailouts.

An industry starts making more profit than normal, usually from an increase in demand.

Competition is attracted to the opportunity and resources are deployed to ramp up production.

This new supply causes a glut and prices fall to find equilibrium.

Weaker competitors are driven out of business by a lack of profits.

Diminished supply now leads to a shortage, pushing up prices.

Competition is attracted to the higher profits.

“Businesses in industries with both substantial over-capacity and a ‘commodity’ product are prime candidates for profit troubles. Over-capacity may eventually self-correct, either as capacity shrinks or demand expands. Unfortunately for the participants, such corrections often are long delayed. When they finally occur, the rebound to prosperity frequently produces a pervasive enthusiasm for expansion that, within a few years, again creates over-capacity and a new profitless environment. In other words, nothing fails like success.” -- Warren E. Buffett

This culling of the herd is a natural, healthy evolutionary process. Bankruptcies sound bad, but humanity is better off when we let economic nature take its course. The profits the strong earn come from delighting us as customers while consuming the least amount of resources to do so. Those who are culled either weren’t giving us the customer experience we wanted or they weren’t cost competitive. Let them declare bankruptcy and hopefully the entrepreneur gets right back in the saddle looking for new ways to make our lives better. That’s the beauty of this infinite game. We should celebrate entrepreneurial failure and straight line them back to the drawing board. Failure is only feedback.

Traditional value investors are weary of any industry making abnormally high profits for fear of capital cycle theory causing reversion to the mean. Likewise, consolidating industries haunted by a lack of profits offer interesting hunting grounds. Lagging “unproductive” assets tend to be cheaply priced. “You can’t make any money in X anymore,” so the thinking goes. When consolidating industry prices eventually firm up, the profits start rolling in. The prices of the securities holding those assets also have a habit of firming up. The unfortunate caveat to this story is, it takes time.

“It is easier to find men who will volunteer to die, than to find those who are willing to endure pain with patience.” --Julius Caesar

Let’s back this up with data. The below is a chart of cash flow return on investment (CFROI) [for simplicity, just think CFROI = “profit”], and how it reverts to the mean. The chart’s authors started by sorting companies into quintiles based on CFROI minus the median of the universe at the beginning of the year. For example, if a company has a 17 percent CFROI and the median is 6 percent, the spread would be 11 percentage points and the company would be in the highest quintile. They then followed the CFROI for each of the five cohorts for ten years.

As you can see, the high return cohort (top line) eroded down toward the median. The low return quintile (bottom line) worked its way up toward the median. This is capital cycle theory in action. The spread from the highest to the lowest quintile shrunk from 18 to 9 percentage points. Textbook mean reversion.

Finally, it’s hard to say it all much better than the master does in these 7 minutes, 29 seconds:

As always, we’re thankful to have such great partners in this wealth creation journey.

1. Hat-tip to my friend Wes Gray for researching and authoring the paper the “God Portfolio” experiment is based on. His title is especially clever: Even God Would Get Fired as an Active Investor