Consolidated-Tomoka Land Co. (NYSEAMERICAN:CTO)’s $97M land sale announced yesterday has dramatically accelerated either a REIT conversion or a full sale of  the company.

Up until yesterday, a significant part of the company’s value was found in undeveloped land marketed for sale in Daytona beach, Florida which the company has been liquidating over a period of years.

“the closing of the sale of a controlling interest in a wholly-owned entity that holds the Company’s remaining land portfolio of approximately 5,300 acres (the “Land Venture”), including the land parcels the Company currently has under contract, to certain funds managed by Magnetar Capital (“Magnetar”) for total proceeds to the Company of approximately $97.0 million (the “Land Transaction”). The Company may, in the future, receive additional proceeds from the Land Venture in the form of distributions under certain circumstances, based upon the timing and amount realized when the land is ultimately sold by the Land Venture.”

As can be seen above, it is not clear what percentage ownership that CTO retained in the land, which lead to initial confusion about the quality of the deal for shareholders.

For example, selling 95% of the land for $97M would have implied a value well below the company’s own estimates of value, making it a heavily discounted sale and not all that impressive.

This was not clarified until the earnings call, when the company stated that the implied value of 100% of the land was $146M.  This total value means that the company retains a 35.5% ownership interest in the land.

This “total value” makes the sale an exceptional deal, as it pulls forward a massive chunk of the land value at only a moderate discount to a conservative full value estimate – and in doing so radically accelerates the next step in the company’s evolution.

The final hang-up from a REIT conversion was the company’s ownership of a golf course.  From yesterday’s earnings call: 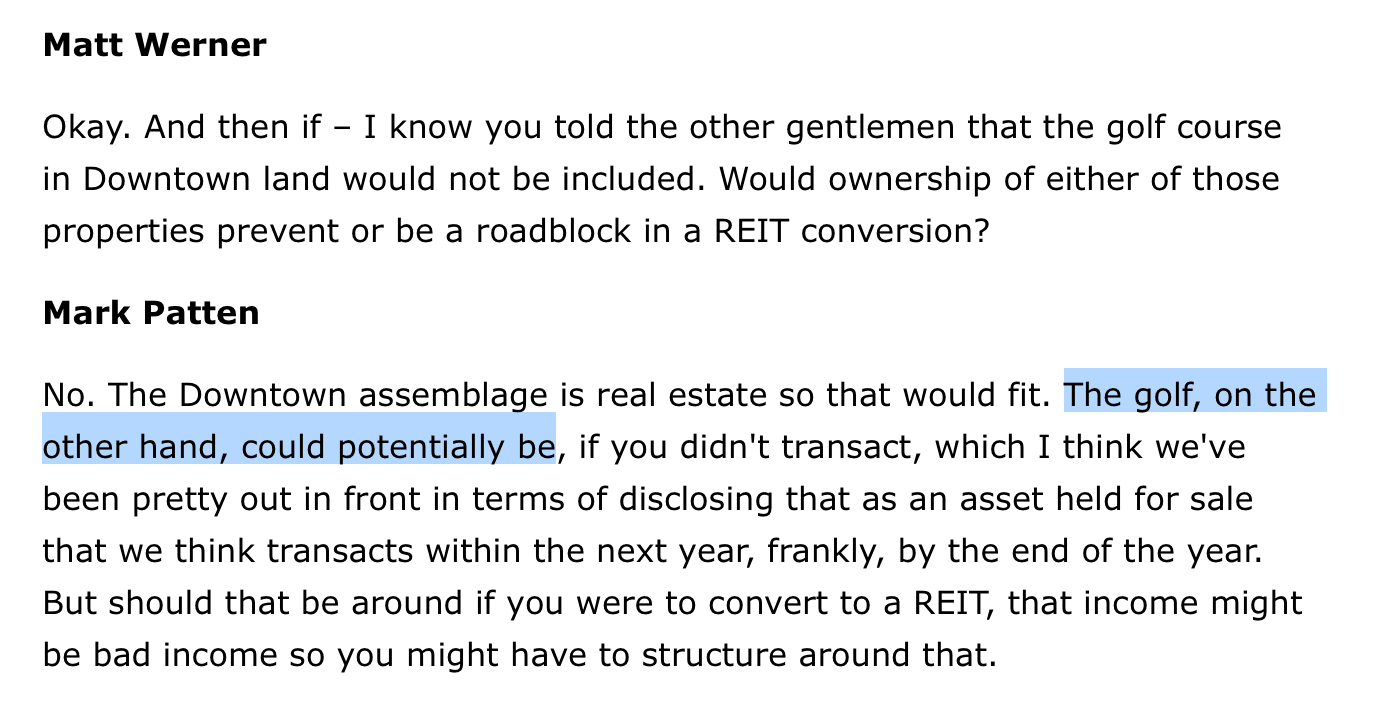 Just this morning, the company announced that the Golf Course has been sold for $3.45M – this definitely falls under, “transacts within the next year, frankly, by the end of the year.”

In other words, the company is now perfectly positioned for either a REIT conversion or a full sale of the business to a larger REIT.

As such, I see Consolidated-Tomoka as a low risk buy given that it is trading at well under my conservative estimate of intrinsic value or NAV: 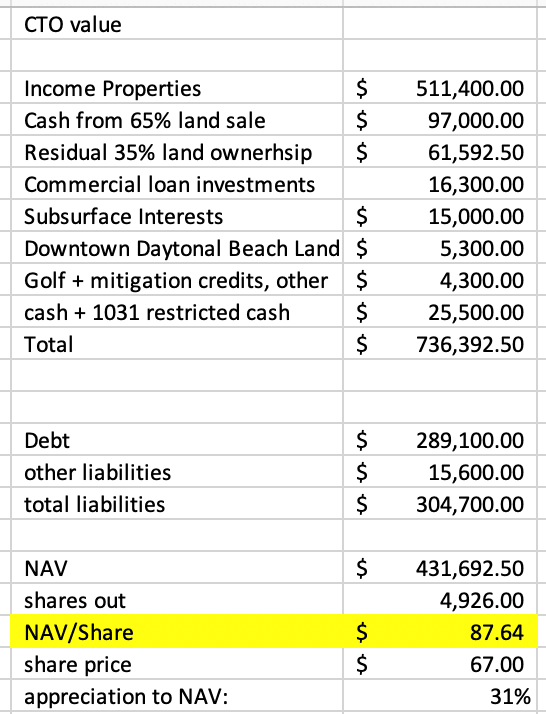 Note, I am using data from last quarter for the above, except for the “Cash for 65% land sale” and “Residual 35% land ownership” lines.  The other changes since that time should not move the needle much with regards to NAV.

While it might take longer to execute, it is possible that a REIT conversion would create the maximum amount of upside for the company.  A peer group average of comparable REITs trade at ~22% premium to NAV.  Applying this valuation to CTO would create upside to $107 per share.

However, sometimes, “A bird in the hand is worth two in the bush”. For this reason, I would not be opposed to a sale of the company at a lower price.

I noted that the land deal was executed with Magenetar Capital, a 5% owner of the company’s shares. Furthermore, I believe Magenetar acquired their position as part of the Wintergreen Liquidation.

I could see Magenetar as helping to engineer this sale on favorable terms in part to position and accelerate a sale of the company, which would allow them to exit their large position with a very high IRR – particularly given they maintain additional upside with the land holding company.

Regardless, I believe Consolidated-Tomoka shareholders have multiple ways to win – with a margin of safety provided by the present steep discount to NAV.

N.A.S. Capital LLC manages separate accounts for high net worth individuals.  Our strategy focuses on under-followed small-cap stocks and special situations that we believe have significant upside potential and a margin of safety.

N.A.S. Capital LLC reserves the right to make investment decisions regarding any security without further notification except where such notification is required by law.