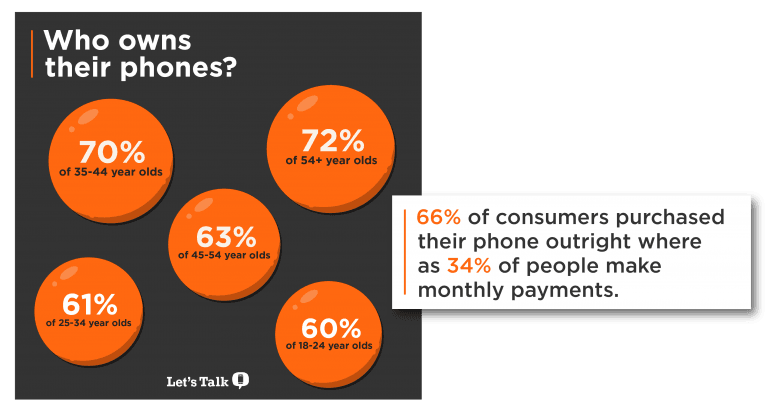 Phones are one of the most of the most essential items in modern life. Most of us use them all day, every day, and as their uses become more varied — and more important — we continue to purchase new ones all the time. Fresh technologies and increased functionality in new models, as well as the wear and tear phones inevitably pick up after long-term daily use, make buying new phones a regular occurrence for many users.

But phones can be expensive. Think back to the last time you bought a new one. Did you pay its full cost upfront? Did you sign up for a payment plan?

Mobile review site Let’s Talk decided to find out how most users are purchasing their phones, as well as how phone-buying habits have changed over the past year. Using a survey of 1,000 American adults, the site came up with some interesting findings.

Although phones are pricey, most users across all age groups bought their phones outright. However, the percentage varied by age group, with younger users tending to be less likely to own their phones than older users:

Purchasing a phone upfront carries many benefits. If you’re not locked into a payment contract with your existing carrier, you can switch to a new one whenever you want, which means that if you notice a carrier has an enticing promotion going on — or simply seems to be a better fit for your budget or lifestyle — you won’t have to worry about finishing out your contract to get your phone paid off.

Let’s Talk also used search data from sister site WhistleOut.com to find that users seem to be buying cheaper phones this year than in 2018. Where last year, users searched for newer, more feature-heavy devices, like Apple’s iPhone XS and Samsung’s Galaxy S9, this year they’re searching for older, cheaper options, such as the iPhone XR or Samsung Galaxy 10 S10e. This seems to suggest that as users consider device options, they’re looking for affordable picks they won’t need a financing plan to buy — which goes along with the fact that most users now buy their phones upfront.

Different payment plans will always appeal to different users. If you’re eager to get the newest top-of-the-line device, it might be worth signing up for a payment installment plan. But as most users seem to agree, sometimes it’s worth it just to pay in full upfront.