ValueWalk
Home Economics Gold Soars on the Saudi Oil attacks: Can it last? 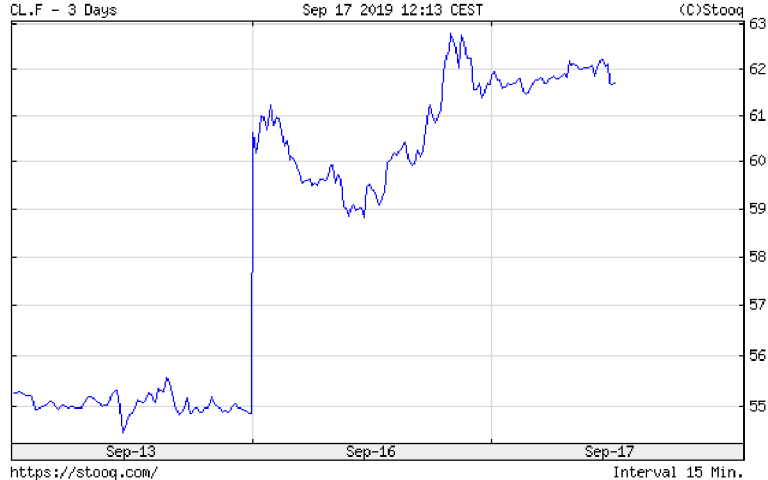 On the weekend, there was a drone attack against the world’s largest oil processing facility and a major oilfield in Saudi Arabia. Oil prices have predictably spiked, but how will this geopolitical shock affect the gold market in the days ahead?

On Saturday, the drone bombings struck the Abqaiq oil-processing plant and the Khurais oil field in Saudi Arabia. Both are important facilities operated by Saudi Aramco, the world’s largest oil producer. Nobody was injured, but the strikes triggered large fires, disrupting the global oil supply.

The Houthis, the Iran-backed rebel army that has been fighting a Saudi-led military coalition in Yemen, claimed responsibility for the attack. However, for some people the sophistication of the attacks is the reason to believe that Iran is the one truly responsible.

Is it a Big Deal?

Yes. Although many drone assaults have crippled Saudi Arabia’s oil industry in recent months, the Saturday’s attack were the most damaging. You see, Abqaiq is the world’s largest oil processing facility, where about two-thirds of the total Saudi supply is refined. So, the attack knocked out 5.7 million barrels of daily oil production, or about 5 percent of global production. It implies the biggest oil shock since 1945 (in absolute terms). As you can imagine, this event had significant impact on the oil prices. Indeed, the Crude Oil Brent have jumped from $60 to $68, or more than 13 percent, which was the biggest daily surge since January 14, 1991 during the First Gulf War. Meanwhile, the Crude Oil WTI prices have soared from $55 to $61, or more than 11 percent, as the chart below shows.

The attacks disrupted the global oil supply and revealed just how much the world’s energy infrastructure is really vulnerable. They also raised concerns about the escalation of tensions in the Persian Gulf. Not surprisingly, we have seen a flight to safe haven assets such as gold. As the consequence, the price of gold jumped over the weekend above $1,500 again.

But what we can expect next for the gold market? Well, the attacks can have a twofold  positive effect for the gold prices. First, the disruptions in the global oil supply could result in the oil shock, which could slow economic growth and raise inflation – just like in the 1970s. However, the impact should be temporary and likely to vanish when the oil supply is restored. Investors should remember that the world is now much better prepared to deal with oil shocks. The spare capacity and reserves are higher and President Trump has already authorized the release of oil from the Strategic Petroleum Reserve, if needed. So we should not see oil and gas shortages as in the 1970s.

Second, the attacks on Saudi Arabia can have important geopolitical implications. President Trump has already announced that the U.S. were “locked and loaded” to hit back after the strikes. Some U.S. politicians flat out called for attacking Iran. If the U.S. engages in another military conflict in the Gulf, the safe-haven demand for gold could rise.

However, investors should remember that geopolitical events very often have merely short-lived effects on the gold prices. For example, the already mentioned First Gulf War failed to make gold rallying. Actually, the presence of the U.S. army in Saudi Arabia significantly reduced risks in the Middle East, which lead – after an initial spike – to the drop in the gold prices, as the campaign turned out to be successful. Similarly, the present tensions do not necessarily have to boost gold prices. Wednesday’s FOMC meeting could have a larger impact on the gold market. Stay tuned!

If you enjoyed the above analysis, we invite you to check out our other services. We provide detailed fundamental analyses of the gold market in our monthly Gold Market Overview reports and we provide daily Gold & Silver Trading Alerts with clear buy and sell signals. If you’re not ready to subscribe yet and are not on our gold mailing list yet, we urge you to sign up. It’s free and if you don’t like it, you can easily unsubscribe. Sign up today!

Disclaimer: Please note that the aim of the above analysis is to discuss the likely long-term impact of the featured phenomenon on the price of gold and this analysis does not indicate (nor does it aim to do so) whether gold is likely to move higher or lower in the short- or medium term. In order to determine the latter, many additional factors need to be considered (i.e. sentiment, chart patterns, cycles, indicators, ratios, self-similar patterns and more) and we are taking them into account (and discussing the short- and medium-term outlook) in our trading alerts.

All essays, research and information found above represent analyses and opinions of Przemyslaw Radomski, CFA and Sunshine Profits' associates only. As such, it may prove wrong and be a subject to change without notice. Opinions and analyses were based on data available to authors of respective essays at the time of writing. Although the information provided above is based on careful research and sources that are believed to be accurate, Przemyslaw Radomski, CFA and his associates do not guarantee the accuracy or thoroughness of the data or information reported. The opinions published above are neither an offer nor a recommendation to purchase or sell any securities. Mr. Radomski is not a Registered Securities Advisor. By reading Przemyslaw Radomski's, CFA reports you fully agree that he will not be held responsible or liable for any decisions you make regarding any information provided in these reports. Investing, trading and speculation in any financial markets may involve high risk of loss. Przemyslaw Radomski, CFA, Sunshine Profits' employees and affiliates as well as members of their families may have a short or long position in any securities, including those mentioned in any of the reports or essays, and may make additional purchases and/or sales of those securities without notice.