Whitney Tilson’s email to investors discussing the dismal performance of “super unicorns”; WeWork weighs slashing its valuation and its CEO returns $5.9 million; MiMedx battle; The end appears to be near for Mallinckrodt.

1) My colleague Enrique Abeyta shares my skepticism of WeWork (oops, I mean “The We Company”) and whether there will be enough suckers (oops, I mean “investors”) to allow it to go public. To help answer this question, he shared a cool piece of analysis with me:

I wanted to know how the stocks of other "unicorn" companies that went public in the last few years have done. Rather than the usual definition of unicorn – a company that has achieved at least a $1 billion valuation in a private financing – I looked only at companies that raised at least $1 billion before going public, which I call "super unicorns."

As you can see from this chart, all but one of them – Pinterest – are down from their closing prices on the first day of trading... And four of them are down more than 35%! 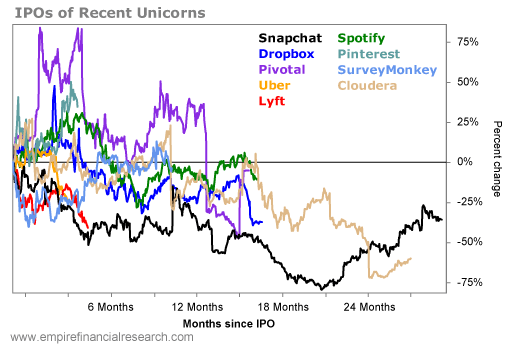 Such dismal performance makes me wonder who's going to buy into the IPO of The We Company, which has far bigger governance and business model issues than any of these companies.

Lastly, check out Chewy (CHWY), which is the new Pets.com. I haven't finished doing the work on it yet, but it seems like a similar set up – and the stock is roughly flat from where it went public less than three months ago.

2) Speaking of The We Company (I chuckle every time I read that stupid name), the Wall Street Journal reports that the company is weighing "slashing its valuation roughly in half to around $20 billion amid IPO skepticism." What a sign of desperation! I continue to believe that this IPO won't get done...

3) WeWork's co-founder and CEO Adam Neumann got so much well-deserved flack for charging the company $5.9 million to use the new name that he's returned the money: WeWork CEO returns $5.9 million the company paid him for 'We' trademark. Excerpt:

WeWork CEO Adam Neumann has returned about $5.9 million worth of stock that was originally paid to him to acquire the trademark "We."

In an amended S-1 filing on Wednesday, WeWork's parent company, the We Company, noted that it was unwinding the agreement "at Adam's direction." The $5.9 million was issued to Neumann after WeWork rebranded to the We Company in January.

4) Speaking of piece-of-crap companies, the end appears to be near for Mallinckrodt (MNK), the scummy company at the center of two outrageous scandals that I've been writing about for years: the opioid crisis and the H.P. Acthar Gel scam. (For more on the latter, see this 60 Minutes story: The problem with prescription drug prices.) Here's an excerpt from BMO Capital's report on it this morning:

We are downgrading MNK to Market Perform as an already challenging situation appears to have taken a turn for the worse. It is being reported that MNK has hired restructuring firms to help manage through its opioid litigation.

While there had been lingering uncertainties with MNK's overall opioid exposure and considerable pressures with key franchise Acthar, we had previously thought it would ultimately be able to navigate through those and that the equity was undervalued.

However, with the rapidly mounting pressures related to the opioid litigation, we can no longer rule out the possibility of bankruptcy.

6) Business journalist Joe Nocera recently wrote two columns about the huge battle between biotech company MiMedx (MDXG) and famed short-seller Marc Cohodes: A Short-Seller Goes Too Far to Beat the 'Bullies' and MiMedx Has Changed, But Its Critics Haven't.

I know both Joe and Marc and am a big fan of them both. They're among the best at what they do.

I haven't done the work on MiMedx, so I don't have an opinion on the stock, but I think there are many important lessons to learn here...