It’s been a great month for Activist Insight Vulnerability so far with predictions coming true left, right, and center. At the end of August, printing company R.R. Donnelley received a demand for a higher dividend from NuOrion Partners, around a year after the company dramatically cut its payout to shareholders. Donnelley was identified by Activist Insight Vulnerability as a potential target in 2017, with the report saying the company might eliminate its dividend to rightsize its balance sheet.

Another prediction was Groupon in 2018, when Activist Insight Vulnerability said that the company could use some of its over $550 million in excess cash to reward shareholders. According to a report by the Wall Street Journal last month, Chapman Capital is canvassing shareholder sentiment on a potential sale or share buyback program. A few days later, Starboard Value disclosed a 7.5% stake in digital storage firm Box, saying shares “were undervalued and represented an attractive investment opportunity.” On July 30 this year, Activist Insight Vulnerability argued that Box could be a target for an activist investor, citing “a handful of setbacks including poor performance and slowing growth.”

Another leading activist investor to capitalize on an Activist Insight Vulnerability prediction was Elliott Management, which last week urged U.S. media and telecom conglomerate AT&T to spin off non-core assets and improve operational efficiency and leadership. To improve its valuation, Elliott said the company should divest non-core assets, institute capital discipline and "aggressively" de-lever, while enhancing "leadership and oversight." In 2017, Activist Insight Vulnerability said: "An activist may seek to stall the company’s M&A strategy and push for a focus on the bottom line and deleveraging."

The most recent Activist Insight Vulnerability prognosis to come to fruition was auto parts maker LKQ, which was targeted by ValueAct Capital Partners last week, less than a year after Activist Insight Vulnerability said the company's governance left much to be desired with "a third of the company’s 12 directors" serving for at least 15 years. Not much has changed since then.

"The company failed to appoint an independent chairman. An activist can certainly push for board refreshment, contending the need for new skills and perspectives," the report said at the time.

Soapbox Research placed a bet against Whirlpool last week, alleging that the dishwasher manufacturer uses "made up metrics" to mislead investors. The short seller accused the company of not being transparent in its communication of financial strains with investors. "Instead, the company has focused on metrics that obfuscate the economic realities of Whirlpool’s declining business and embellish results," the short seller said.

Specifically, Whirlpool has measured its value creation by focusing on sales growth, EBIT margin, and free cash flow as a percentage of sales. Soapbox said these "seemingly standard measures" are derived using "numerous addbacks and adjustments at management’s discretion." In addition, Soapbox said it believes that Whirlpool relies on a "made up metric," ongoing earnings per diluted share, to "further mask Whirlpool’s true business trajectory."

The short seller claimed that Whirlpool had incurred restructuring expenses every year since 2001, which had been removed from expenses used to generate ongoing EBIT and ongoing business diluted EPS. Soapbox also noted that Whirlpool faces intense competition from Samsung and LG, adding that the competition will only increase as the firms "ramp up production" at their U.S. factories, leading to margin deterioration for Whirlpool.

The number of Canada-based companies publicly subjected to activist demands by U.S.-based activists between January 01 and September 13 in respective years. 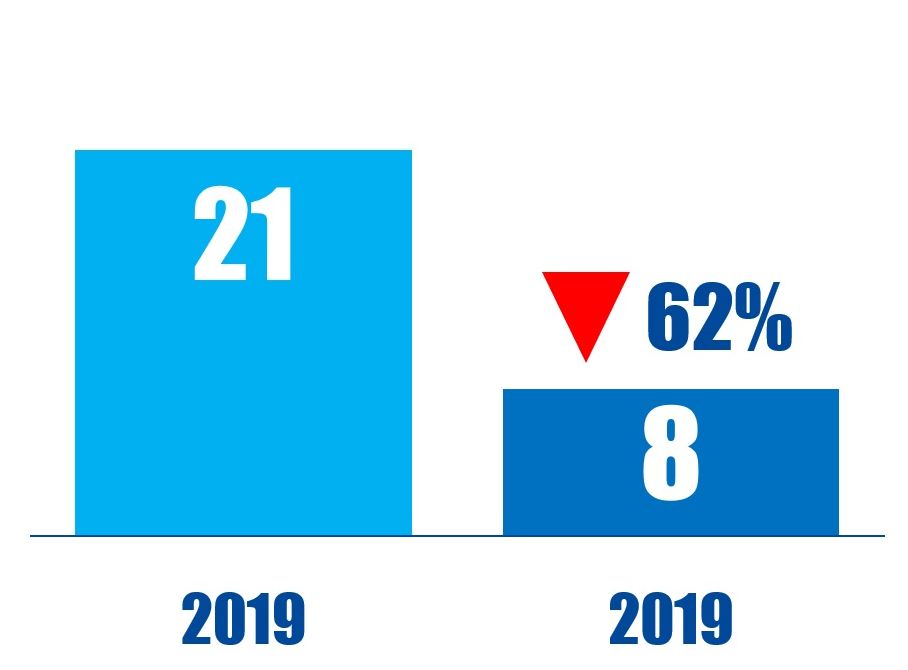 Sales Are UP But Don’t Trust the Bottom Line