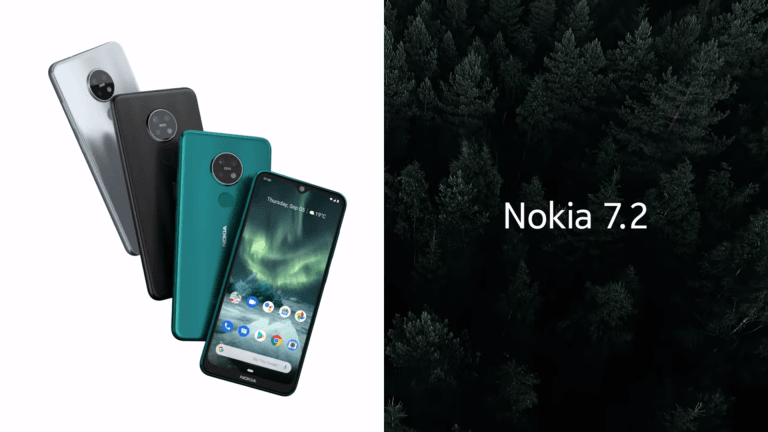 HMD Global has officially launched the Nokia 7.2 mid-range smartphone at the IFA 2019 event in Berlin. Mid-range smartphones have become so good that unless you play demanding games or run multiple apps simultaneously, you don’t need to spend a thousand dollars on a premium phone. Mid-range devices are good enough for almost every task. The new Nokia 7.2 will be competing with another popular mid-range device called Google Pixel 3a. Let’s check out how the two devices stack up. Both of them cost below $400.

The new Nokia phone has a premium design with a waterdrop notch at the top  and thin chin at the bottom of the screen. It measures 159.9 × 75.1 × 8.3 mm and weighs 180g. The rear panel has a curved glass back. Both the front and back glass panels are protected by Corning’s 2.5D Gorilla Glass 3. The front and rear glass panels are supported by a polymer composite frame in the middle. HMD Global claims the polymer composite frame weighs only half as much as aluminum but is as strong as polycarbonate.

The back panel has a circular camera module that houses an LED flash and three camera sensors. It reminds you of the old Lumia days. A round fingerprint sensor is placed right below the camera module. The device comes with splash resistance, meaning it can survive a little rain.

The Nokia 7.2 will be available in Charcoal, Cyan Green, Ice colors. It retains the 3.5mm headphone jack.

The Google Pixel 3a doesn’t have a display notch, but it features thick bezels at the top and bottom of the screen. It has a polycarbonate body with a dual-tone finish. The Pixel 3a gets a front-facing and a bottom-firing speaker to produce stereo sound. Just like Nokia 7.2, it comes with the 3.5mm headphone jack and splash resistance.

Its back panel is made out of plastic and houses a single camera lens in the top-left corner. The device has a fingerprint sensor in the center of the rear panel. The Pixel 3a measures 151.3 x 70.1 x 8.2mm and weighs 147g. It comes in Clearly White, Just Black, and Purplish colors. The device gets Google’s Active Edge feature, which allows users to activate Google Assistant by squeezing the phone.

The Nokia 7.2 has a larger 6.3-inch PureDisplay IPS LCD screen. LCD panels are not as bright, sharp, and color accurate as their OLED counterparts. But HMD Global’s PureDisplay technology offers high contrast and HDR10 support. It can also upscale standard video content from SDR to HDR in real-time. The device has an impressive 500 nits of brightness and Full HD+ resolution of 1080 x 2340 pixels. The display is protected by Corning’s Gorilla Glass 3.

The Google Pixel 3a has a relatively smaller 5.6-inch gOLED display. It has an 18.5:9 aspect ratio, 441ppi of pixel density, and Full HD+ resolution of 1080 x 2280 pixels. Its OLED screen delivers more vibrant colors while preserving battery life. The Pixel 3a uses Asahi Dragon Glass for protection.

The Nokia 7.2 is powered by Qualcomm’s octa-core Snapdragon 660 processor. It comes in two different RAM options of 4GB and 6GB. HMD Global has launched the device in two different storage options of 64GB and 128GB. The device also supports external memory of up to 512GB via a microSD card slot.

The mid-range Nokia phone has two SIM card slots. It packs a 3,500mAh battery with 18W fast charging over USB-C port. HMD Global claims the battery lasts up to two days, but I wouldn’t be so optimistic.

The Pixel 3a has Google’s Titan M security chip and it supports ARCore framework for augmented reality. The device features a 3,000mAh battery with 18W fast charging, which delivers up to seven hours of battery life in just 15 minutes of charging. The battery is good enough to get you through a full day of normal usage.

They are both Android devices. Since Nokia 7.2 is part of Google’s Android One program, it guarantees at least two years of Android software updates and three years of security patches. The Nokia 7.2 also has a clean and uncluttered interface with no bloatware. It will also be among the first phones to get the new Android 10 update.

The Google Pixel 3a was part of Google’s Android 10 beta program and has already received the new software update. It brings the Call Screen feature that lets Google Assistant handle spam calls for you. The Pixel 3a also has a Now Playing feature that tells you what songs are playing around you. It will be among the first phones to get software updates and security patches.

The round module on the back of Nokia 7.2 accommodates three lenses and an LED flash. It features a 48MP primary sensor, an 8MP wide-angle lens, and a 5MP depth sensor for bokeh effects. HMD Global has used Zeiss optics and AI support on the device. The main 48MP lens uses pixel-binning technology, which combines four pixels into one to deliver a superior 12MP shot out of a 48MP picture.

The Nokia 7.2 is capable of recording 1080p videos at 60fps and 4K videos at 30fps. The device has a 20MP selfie camera. HMD Global has added a number of Zeiss bokeh styles in the main camera such as Zeiss Modern, Zeiss Smooth, and Zeiss Swirl. It also gets Night Mode to take better pictures in low-light conditions.

In contrast, the Google Pixel 3a has only a single lens on the back a single selfie camera. The rear camera is a 12.2MP lens with OIS, EIS, and f/1.8 aperture. On the front, it has an 8MP selfie camera with f/2.0 aperture. Its camera setup is the same as the more expensive Google Pixel 3, which explains why DxOMark rated Pixel 3a among the world’s best smartphone cameras.

The Pixel 3a is capable of recording 4K videos at 30fps, Full HD videos at 120fps, and 720p videos at 240fps. Google has packed the device with excellent camera features such as Night Sight, HDR+, Portrait mode, Super Res Zoom, Playground mode, and Top Shot mode.

The Nokia 7.2 has a starting price of $350 in the United States and EUR 249 in European markets. It will hit the store shelves later this month. You will be able to buy it from Amazon or Best Buy. The device supports only AT&T and T-Mobile networks.

The Google Pixel 3a has been priced at $399. You can buy it from Google Store, Amazon, Best Buy, and other retailers in the US. It’s also available at carriers like Verizon, T-Mobile, Sprint, US Cellular, and AT&T.

The Pixel 3a has an edge in terms of camera, display quality, and software. In all other aspects including design, RAM and storage, the Nokia 7.2 is superior. Its lower price tag would also help attract buyers. 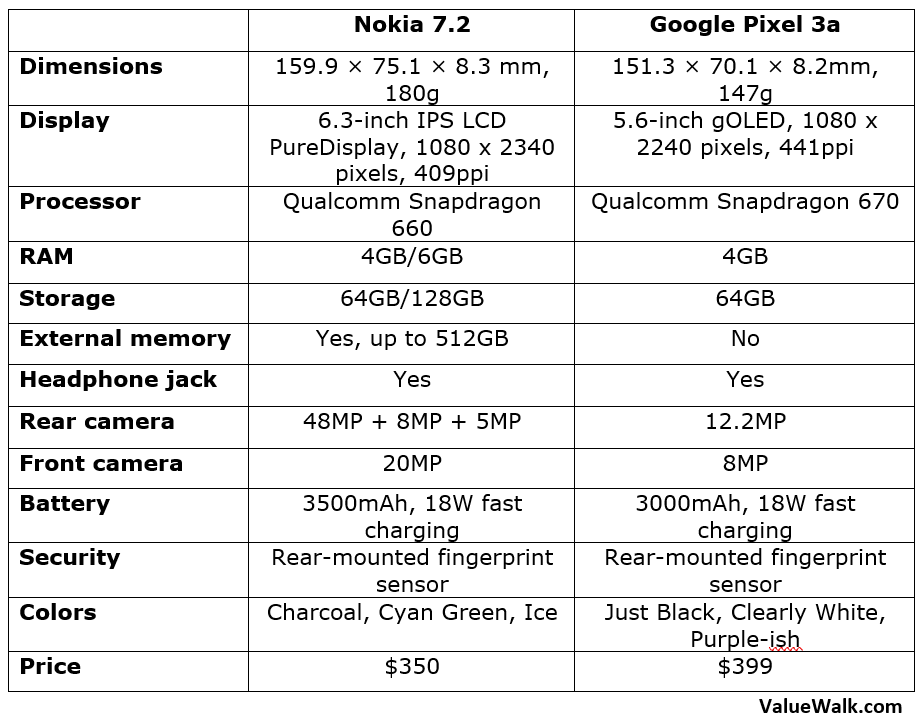