1) Back in April, flooring firm Lumber Liquidators was the first stock I recommended to my Empire Investment Report subscribers.

It's been a wild ride since then, especially over the past month thanks to the actions of the company's founder and former CEO, Tom Sullivan. Last month, Sullivan disclosed that he had increased his stake in the company to 6%. Then, two weeks ago, he bumped it to 7.7% and said he was interested in taking the company private.

The stock soared to $13 on the news... But then, Sullivan turned around and dumped nearly his entire stake, causing the stock to fall to today's level around $9 a share.

What the heck is going on?

I provided an in-depth answer – as well as my thoughts after meeting CEO Dennis Knowles again last week – to my subscribers in this month's Empire Investment Report, but here's a summary...

While some might view Sullivan's actions as a classic pump-and-dump, I still think he would love to buy Lumber Liquidators Holdings Inc. As I wrote in the issue...

I suspect the reason Sullivan quickly reduced his position is because he realized that by revealing his plans, he had caused the stock to run up so much that he couldn't get a deal done.

When he bought the stock slightly below $8, he might have figured that the board and shareholders would accept a buyout price of $12 – a 50%-plus premium to the share price at the time. But when the stock ran up to $13, he would have had to pay, say $15, which he was unwilling (or unable) to do.

So Sullivan pocketed a cool $5 million, and now he waits, hoping the stock falls enough that he can offer a substantial premium, yet still steal the company with a lowball bid. Under this scenario, he'll keep future purchases under 5% of the shares outstanding so he doesn't have to publicly disclose what he's doing. Then he'll line up a fully financed bid and spring it unexpectedly.

Despite the whipsawing action, I'm still as bullish as ever on Lumber Liquidators and think the stock is still a double from here. And it turns out, I'm not the only one who sees its upside...

2) As I mentioned in Monday's e-mail, I recently had a pleasant conversation with Professor Joel Litman, a forensic accountant who has developed a unique methodology for analyzing companies' financial statements to uncover their true earnings and financial health.

I asked Joel to share his analysis of Lumber Liquidators Holdings Inc. Here's what he told me...

When we apply our Uniform Accounting metrics, the distortions from as-reported accounting statements are removed – including stock option expenses and operating lease capitalization versus expensing – and we can immediately see that Lumber Liquidators has rebounded far stronger and faster than the market realizes.

This chart shows the company's as-reported (GAAP) and adjusted return on assets over the past five years...

The first thing that jumps out is that the formaldehyde scandal really did dramatically disrupt Lumber Liquidators' business. Its GAAP ROA fell from 14% in 2014 to -9% in 2016, and since then has only rebounded to 4% – still below its cost of capital.

However, our proprietary Uniform Accounting reveals a different story. Although adjusted ROA still turned negative, it only bottomed at -3% in 2016, and it has since rebounded all the way to 7% in 2018, meaning the company is well on its way to getting back on track.

The market, however, is still misunderstanding Lumber Liquidators and reacting to the misleading GAAP numbers, so the stock remains more than 90% off its all-time highs.

One of the keys to being a successful investor is being able to differentiate between a value trap versus a company in which a turnaround is underway. Our analysis indicates that Lumber Liquidators is the latter.

Thank you for sharing your valuable insights, Joel!

By the way, if you're interested in learning more about Joel's methodologies, be sure to reserve a spot for his live demonstration on Wednesday, September 25, at 8 p.m. Eastern time. During the free event, he'll reveal the name of a little-known U.S. stock he says is a must-own right now. Save your seat right here.

3) It's amazing that only a decade ago, actively managed funds had three times the assets of index funds – and now, for the first time ever, index funds have more.

I don't think this is a bubble or a fad, either. In fact, I expect this trend to continue for decades. Index Funds Are the New Kings of Wall Street. Excerpt:

Money managers that mimic the stock market just became the new titans of the fund-management world. 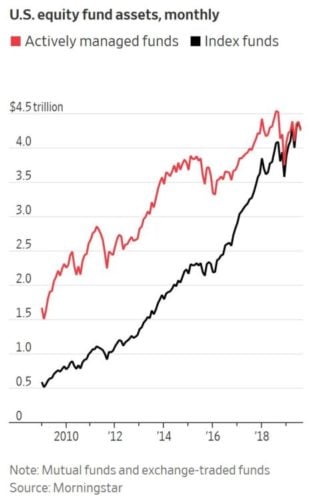 A better approach would be to encourage the various government entities to forge a settlement with Purdue that excluded the Sacklers. Then they could continue suing family members, or craft a different settlement with them that took away a significant portion of the $13 billion they are said to be worth. Now that there are no Sacklers on the Purdue board, this strikes me as reasonably realistic.

The entities affected by the opioid crisis – whether states, cities, tribes or individuals – can't wait that long to get relief. They need it now. The settlement that was negotiated between Purdue and the plaintiffs will get them that money. That's enough reason the settlement on the table is the best way forward, even if it doesn't satisfy the soul.