ValueWalk
Home Technology iPhone 11 Pro vs OnePlus 7 Pro: Which One Has Better Specs?

We have entered the era of ‘Pro’ smartphones, as if all other smartphones are amateurs. Just a few months after OnePlus launched the much-hyped OnePlus 7 Pro with a premium pricing, Apple has officially unveiled the iPhone 11 Pro and iPhone 11 Pro Max (that’s a mouthful). OnePlus has always positioned its flagship smartphones as an affordable alternative to the ridiculously expensive iPhones. In this iPhone 11 Pro vs OnePlus 7 Pro comparison, let’s check out how the two devices stack up.

The iPhone 11 Pro brings no major design changes. It looks nearly identical to last year’s iPhone XS, except the square camera module on the back and new color options. It has a notch at the top of the screen to house to Face ID sensors, ear speaker, selfie camera and other sensors. It has premium glass panels on the front and back supported by a stainless steel frame in the middle.

The iPhone 11 Pro measures 144 x 71.4 x 8.1mm and weighs 188g. Its square camera module on the back panel has a triple camera setup and an LED flash. The device lacks the 3.5mm headphone jack. It comes in Space Gray, Silver, Gold, and Midnight Green colors. The iPhone 11 Pro has an IP68 rating for water-resistance, meaning it can remain submerged in 4 meters deep water for up to 30 minutes.

The OnePlus 7 Pro has also done away with the audio jack. It also lacks an IP rating for water-resistance, though it does offer splash resistance. The OnePlus flagship has curved glass panels on the front and back, supported by a metal frame. It has stereo speakers to enhance the audio experience.

Unlike the new iPhone, OnePlus 7 Pro offers a notch-less and bezel-less design. Instead of a notch, the Chinese company has used a motorized pop-up selfie camera that pops up whenever you need to take selfies or make video calls. Its real panel is protected by Corning’s Gorilla Glass 5.

The OnePlus 7 Pro measures 162.6 x 76 x 8.8 mm and weighs 206g, making it taller, wider, thicker, and heavier than the new iPhone. It comes in Almond, Mirror Gray, and Nebula Blue colors. While Apple uses Face ID for authentication and security, OnePlus has opted for an in-display fingerprint sensor.

The iPhone 11 Pro packs a 5.8-inch OLED screen, which Apple describes as the Super Retina XDR display. It has 1,125 x 2,436 pixels resolution with 458ppi of pixel density. It has a peak brightness of 800 nits. The device supports HDR and True Tone technology which optimizes the screen brightness and color saturation based on ambient lighting.

The OnePlus 7 Pro also features an OLED screen, which has received the highest rating from the testing firm DisplayMate. The OnePlus flagship also offers a blazing-fast 90Hz refresh rate, which enhances the gaming and video watching experience.

Both handsets are powerful beasts. They can handle any task you throw at them. The iPhone 11 Pro runs Apple’s new A13 Bionic processor paired with the third-generation Neural Engine. Apple never officially reveals the amount of RAM on its smartphones, but the newly spotted AnTuTu listings suggest all three new iPhone models pack 4GB RAM.

The iPhone 11 Pro comes in three different storage options of 64GB, 256GB, and 512GB. Apple doesn’t support external storage on its devices. If you like to keep a lot of photos, videos, and movies on your phone, you’d want to buy the highest storage option you can afford. The new iPhones would run Apple’s iOS 13 software out of the box.

The OnePlus 7 Pro runs Qualcomm’s octa-core Snapdragon 855 processor with Adreno 640 GPU. The Snapdragon 855 is not as powerful as Apple’s A13 Bionic, but it’s powerful enough to perform even your most demanding tasks. The OnePlus flagship runs a custom OxygenOS skin on top of Android 9 Pie. It would get the Android 10 update in the next few weeks.

The OxygenOS has features like Gaming Mode and Smart Boost to offer better performance while preserving the battery life. It also brings background optimizations to keep the phones running fast even as they get older.

Apple doesn’t like to talk about the size of the iPhone batteries. The iPhone 11 Pro’s battery is expected to be bigger than 2,658mAh found inside the iPhone XS. Since Apple controls both hardware and software of its smartphones, it can tightly integrate them to offer a good battery life even with a decent battery capacity.

The Cupertino company claims the iPhone 11 Pro battery lasts up to four hours longer than iPhone XS. If true, it would be a significant jump. The new iPhones ship with an 18W fast charger, which delivers 50% charge in just 30 minutes.

The iPhone 11 Pro supports wireless charging, which is missing from the OnePlus 7 Pro. The OnePlus 7 Pro packs a giant 4,000mAh battery with 30W Warp Charge technology. It charges via a USB-C port. The phone’s faster refresh rate and pop-up selfie camera mechanism consume a bit of extra power. But the OnePlus device can easily get you through at least a full day of normal usage.

The OnePlus 7 Pro also features an excellent triple camera setup on the back. It houses a 48MP primary lens with OIS and f/1.6 aperture; a 16MP ultra-wide angle lens with 117-degree field of view and f/2.2 aperture; and an 8MP telephoto lens with f/2.2 aperture, OIS, and 3x optical zoom. For selfies, the OnePlus flagship has a 16MP pop-up camera that comes up whenever needed. The phone is capable of recording 4K videos at 60fps.

The iPhone 11 Pro is now available for pre-order, and will hit the store shelves on September 20 in the United States. The device has been priced at $999 for the 64GB variant. Apple is currently running a trade-in program that brings down the price of the handset to just $599 depending on the trade-in value of your current device. The 256GB model costs $1,149 and the 512GB version has been priced at $1,349.

The OnePlus 7 Pro has breached the premium territory in terms of pricing, but it’s still far more affordable than the iPhone 11 Pro. It costs $669 for the 6GB RAM model, $699 for the 8GB RAM variant and $749 for the 12GB RAM version.

The OnePlus 7 Pro lacks water resistance and wireless charging, and its processor is not as fast as Apple’s A13. But it’s as good as the iPhone 11 Pro in almost every other aspect. Its lower price has been its key selling point. If you don’t want to spend a thousand dollars on a phone, OnePlus 7 Pro is a great buy. 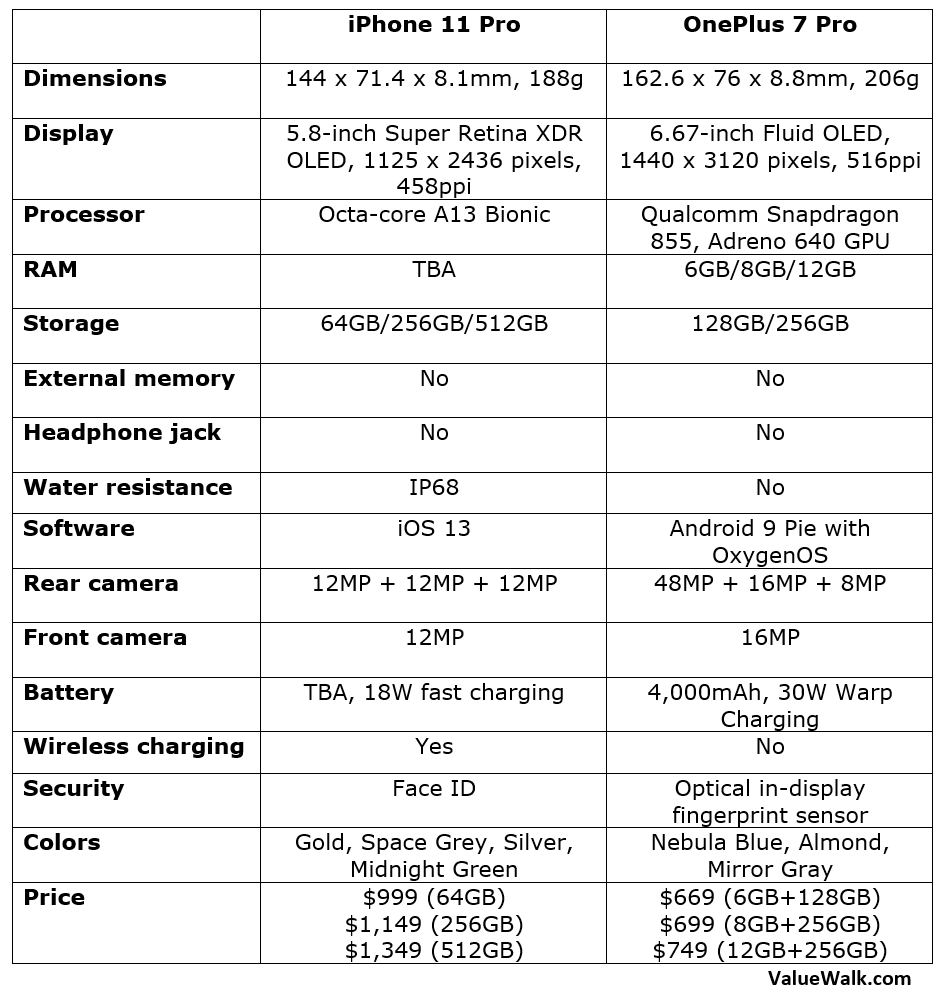