ValueWalk
Home Technology iPhone 11 Pro vs Galaxy Note 10: Which one is better?

The iPhone 11 Pro has the same old design that Apple introduced with the iPhone X in 2017. It has a wide notch at the top of the display to accommodate the Face ID sensors, front camera, and ear speaker. It has a premium glass finish on the back. The front and back glass panels are supported by a stainless steel frame in the middle.

The most noticeable change you’ll notice on the device is the square camera module on the back that houses three lenses and an LED flash. Not everyone is going to like the square camera bump. The iPhone 11 Pro measures 144 x 71.4 x 8.1mm and weighs 188g. It lacks the 3.5mm headphone jack.

The Apple device comes with an IP68 rating for water- and dust-resistance, which enables it to survive in up to 4 meters deep water for up to 30 minutes. Apple has launched the iPhone 11 Pro in Midnight Green, Silver, Space Gray, and Gold colors.

On the other hand, the Galaxy Note 10 sports a gorgeous display with curved edges. Instead of a notch, Samsung has used a punch-hole in the top-center of the screen to accommodate the selfie camera. It has a nearly bezel-less design.

The Note 10’s front and rear glass panels are curved on the sides, and are supported by a metal frame in the middle. The S Pen stylus sits nicely in its silo. On the back panel, the cameras are arranged vertically. Samsung has integrated the ultrasonic fingerprint sensor under the display, allowing you to unlock the device by putting your finger on the screen.

Samsung has also done away with the 3.5mm headphone jack. The Note 10 comes with an IP68 rating for water- and dust-resistance. The Korean electronics giant has also removed the Bixby button from its flagship device. Users can now trigger Bixby with a long press of the power button. Samsung doesn’t allow users to configure it to Google Assistant.

Both iPhone 11 Pro and Galaxy Note 10 sport the best screens in the industry, which shouldn’t come as a surprise because Samsung Display makes OLED panels for both devices. The iPhone 11 Pro packs a 5.8-inch OLED panel, which Apple calls the Super Retina XDR display.

The iPhone 11 Pro has 2,436 x 1,125 resolution with 458ppi of pixel density. It supports HDR and Apple’s True Tone technology which optimizes the brightness and color based on ambient lighting. It offers peak brightness of 800 nits.

The Galaxy Note 10 sports a 6.4-inch Dynamic AMOLED Infinity-O display with a cutout at the top to house the selfie camera. It supports HDR10+ to enhance the gaming and video watching experience. The large display also makes it more comfortable for users to scribble or doodle with the S Pen stylus.

The iPhone 11 Pro runs Apple’s custom A13 Bionic chipset, which Apple claims is the most powerful smartphone chipset in the market right now. It is accompanied by the third-generation Neural Engine. The new iPhone’s processing power will allow users to take full advantage of the phone’s AI and augmented reality capabilities.

The device would run Apple’s iOS 13 software out of the box. Apple didn’t reveal the amount of RAM on the new iPhones. But you can expect a blazing fast experience because Apple tightly integrates the hardware and software in iPhones to deliver maximum performance.

The iPhone 11 Pro will be available in three different storage options of 64GB, 256GB, and 512GB. There is no microSD card slot on the device. So, you’d want the maximum storage you can afford.

Apple hasn’t revealed the battery capacity of the iPhone 11 Pro. It is expected to be larger than iPhone XS’ 2,658mAh. Since Apple controls both software and hardware of iPhones, it can tightly integrate them to offer a pretty good battery life even with decent battery capacity.

The Cupertino company claims the iPhone 11 Pro lasts four hours longer than iPhone XS, which would be a significant jump. The new iPhones ship with an 18W fast charger that delivers 50% charge in just 30 minutes. The device also supports wireless charging.

The Snapdragon 855 or Exynos 9825 aren’t as powerful as Apple’s A13 Bionic. But they are powerful enough to handle any task you throw at them, including graphics-intensive games. The Note 10 packs 8GB RAM and 256GB of storage. It lacks a microSD card slot.

The Note 10 features a 3,500mAh non-removable battery with 25W fast charging. Samsung also sells a 45W charger separately. The battery is large enough to get you through a full day of normal usage. Samsung promises up to 17 hours of video playback or up to 15 hours of Internet browsing on a single charge.

The Galaxy Note 10 also supports Wireless PowerShare technology, which allows you to charge other devices and accessories by putting them on the back of the Note 10. The device runs Samsung’s custom One UI skin on top of Android 9 Pie. It would be upgraded to the latest Android 10 software later this year. The One UI skin offers a fast and intuitive experience, but continues to carry tons of Samsung’s legacy features.

The camera is one of the biggest highlights of the iPhone 11 Pro. It has a triple camera setup on the back, consisting of a 12MP wide-angle lens with an f/1.8 aperture, a 12MP ultra-wide angle lens with f/2.4 aperture, and a 12MP telephoto lens with an f/2.0 aperture. Two of the three lenses support optical image stabilization.

The Galaxy Note 10 has a triple camera setup on the back panel. It consists of a 12MP main camera with OIS, a 16MP ultra-wide angle lens, and a 12MP telephoto lens with 2x optical zoom and OIS. On the front, the Note 10 features a 10MP selfie camera with f/2.2 aperture. It can record 4K videos at 60fps.

Samsung has improved video recording capabilities with Note 10. It comes with the ability to blur the background in videos. It also gets a zoom microphone feature that uses three microphones to beamform and record the audio only from where you’ve pointed the camera. Another feature is Scene Optimizer that automatically changes settings based on the scene to take the best possible picture.

The Galaxy Note 10 comes with some special features that are missing from the iPhone 11 Pro, the most important of them being the S Pen stylus. The stylus allows you to jot down notes, doodle, trigger the camera shutter, and advance PowerPoint slides. The new S Pen also features an accelerometer and gyroscope to enable air gestures, which allow you to perform certain actions by waiving the stylus in the air.

Another feature is DeX, which turns your smartphone into a computer when you connect it to an external monitor and keyboard. It supports both Windows and Macs. Samsung has also added support for Microsoft’s “Your Phone” feature for Windows 10 users. It allows users to get all their phone’s notifications, texts, and photos directly on their Windows computer.

Apple will start accepting pre-orders on September 13. The device would hit the store shelves on September 20. In contrast, the Galaxy Note 10 has been priced at $949. You can buy it directly from Samsung’s website or at all major US carriers. 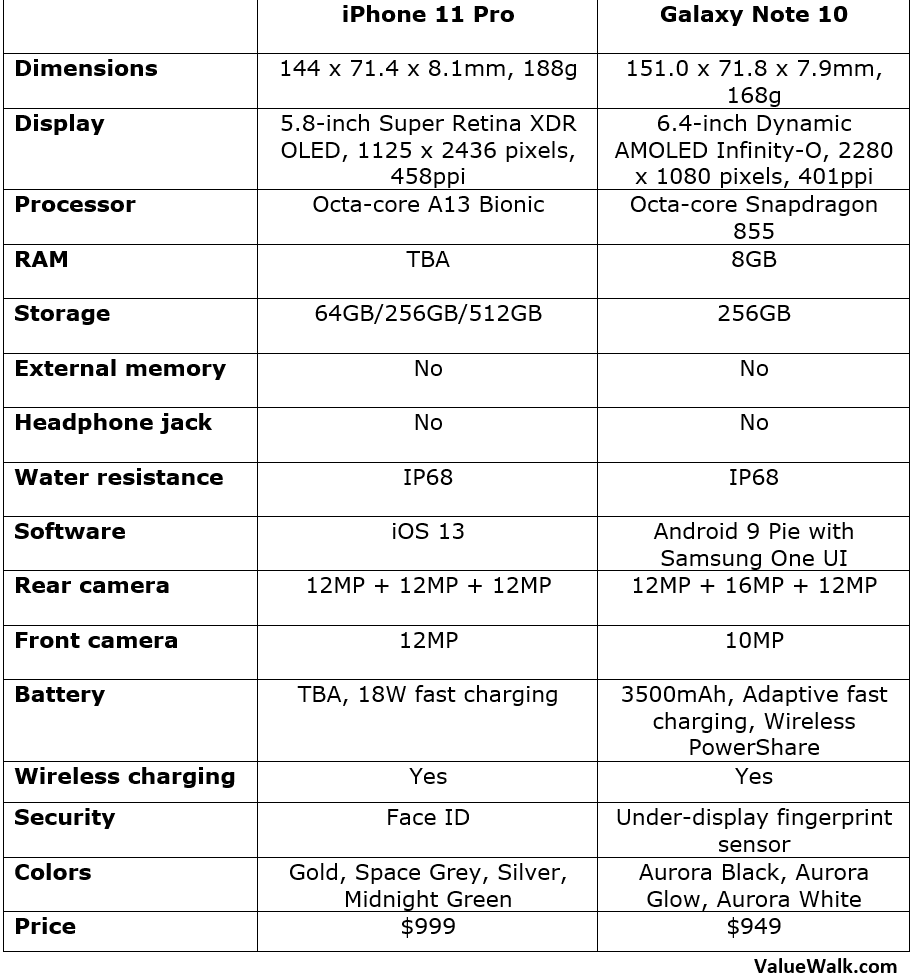