The world’s first 5G smartphones launched just a few months ago, and they were ridiculously expensive. Samsung’s Galaxy S10 5G, the first 5G smartphone, was priced at $1,299 while the regular Galaxy S10 started at $899. The latest Galaxy Note 10 Plus 5G also costs $1,299. OnePlus brought down the price of 5G phones below $1,000 with the launch of OnePlus 7 Pro 5G. Industry experts were not expecting the technology to trickle down to mid-range smartphones until next year at the earliest. But Samsung is just speeding up the process with the launch of Galaxy A90 5G.

The Galaxy A is Samsung’s mid-range series that it launched to better compete with Chinese vendors that were rapidly eating into its market share. The Galaxy A90 5G is the first device in the series to support 5G connectivity as well as Samsung’s DeX desktop interface. Let’s check out how it stacks up against OnePlus 7 Pro 5G.

Samsung’s device has a tiny notch at the top to house the selfie camera, and a barely noticeable chin at the bottom of the screen. It lacks the 3.5mm audio jack. The rear panel is made out of glass and has a “unique geometric pattern.” The top half of the back panel has a gradient finish and the bottom half has a plain color. It sports a vertically aligned triple camera setup on the back.

The OnePlus device lacks water resistance and 3.5mm headphone jack. It has curved glass panels on the front and back, supported by a metal frame in the middle. Unlike A90, it doesn’t have a notch. OnePlus has used a motorized pop-up mechanism to house the selfie camera, which pops up automatically when you want to take a selfie or make a video call. It automatically retracts itself in case you accidentally drop the phone.

Samsung makes some of the world’s best smartphone displays. The Galaxy A90 5G features a giant 6.7-inch Super AMOLED Infinity-U display. It has a Full HD resolution of 1080 x 2400 pixels with a 20:9 aspect ratio and 393ppi of pixel density. Samsung has embedded the fingerprint sensor under the display, allowing you to unlock the device by putting your finger on the screen.

The OnePlus 7 Pro 5G sports a gorgeous 6.67-inch Fluid AMOLED display with a relatively higher 1440 x 3120 pixels resolution. It has an impressive 516ppi of pixel density and 19.5:9 aspect ratio. It offers a super-fast 90Hz refresh rate, which enables a smoother and faster gaming experience. OnePlus has also embedded the fingerprint sensor under the display.

Both handsets run the same octa-core Qualcomm Snapdragon 855 processor with Adreno 640 GPU. They both use the same Snapdragon X50 modem for 5G connectivity. If your carrier supports 5G, you can use either device to enjoy blazing fast download speeds.

The Galaxy A90 5G packs 6GB or 8GB of RAM with 128GB of internal storage. It also has a microSD card slot that supports external memory of up to 512GB. It packs a giant 4,500mAh battery with 25W fast charging. The 5G technology is going to consume some extra power, but the battery is large enough to get you through a full day of normal-to-heavy usage.

It also supports DeX, which allows you to turn your phone into a computer by connecting it to a monitor and keyboard. The device runs Samsung’s custom One UI skin on top of Android 9 Pie. It is expected to get the Android 10 update in the next few months.

The OnePlus flagship runs a custom OxygenOS software on top of Android 9 Pie. It would receive the Android 10 update by the end of this year. OxygenOS has features like Gaming Mode and Smart Boost to offer better performance while preserving battery life. It also features background optimization to keep the phones running fast even as they age.

The A90 5G sports a triple camera setup on the back and a single lens on the front for selfies. The rear setup consists of a 48MP primary sensor with f/2.0 aperture, an 8MP ultra-wide angle lens with f/2.2 aperture, and a 5MP depth sensor to take portrait images with blurred backgrounds. It is loaded with features like Scene Optimizer, Flaw Detector, and Super Steady.

For selfies, the Samsung device gets a 32MP front camera with f/2.0 aperture placed inside the waterdrop notch. The front camera comes with a Live Focus Mode.

The OnePlus device also has three lenses on the back. It features a 48MP main sensor with OIS, a 16MP ultra-wide angle shooter with 117-degree field of view, and an 8MP telephoto sensor with 3x optical zoom. For selfies, it has a 16MP pop-up camera.

Samsung is first launching the Galaxy A90 5G in its home market before bringing it to other countries. The company hasn’t announced the US pricing or launch date yet. The device is now available in South Korea with a starting price of KRW 900,000 ($741), according to Yonhap News Agency.

The OnePlus 7 Pro 5G is currently available only in select markets including the US and UK. The device has been officially priced at $840, but you can get it for a lot cheaper. Sprint is currently offering the device for just $20 per month with $0 down payment if you sign up for the 18-month Sprint Flex lease. The carrier claims it brings down the price of the device by more than 40%. 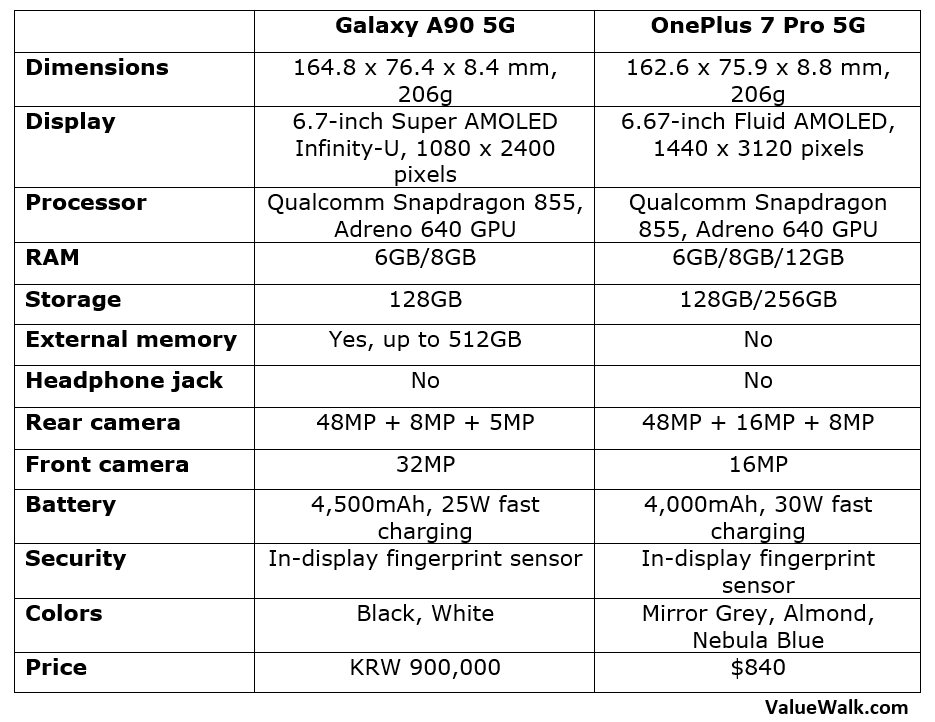