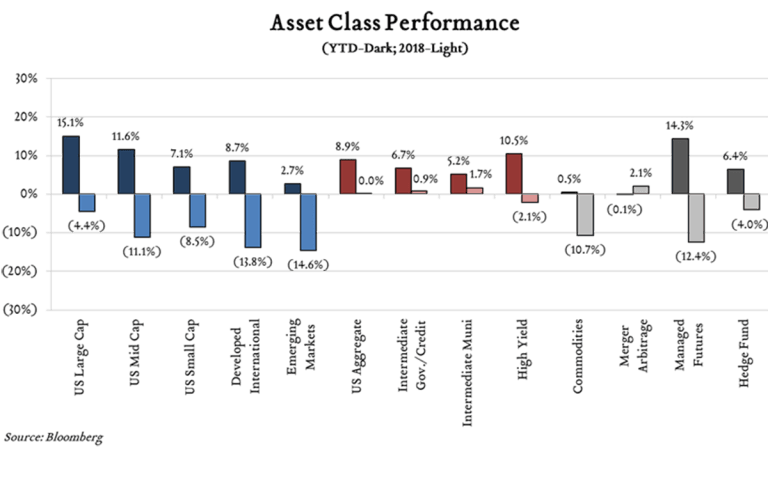 In 2018, almost every major asset class posted disappointing returns as markets priced in an immediate recession that failed to materialize.  2019 began with a “miracle recovery” as equities captured new highs and declining interest rates boosted bonds.  In recent weeks, anxiety and volatility have spiked once again amid escalating uncertainties.  Headlines suggest that a global recession and accompanying 2008-style financial market collapse are imminent.  While we agree that recession risks are higher today than they were 6 months ago, we believe the onset of recession in 2019 is unlikely and see potential for the expansion to continue into 2020.

Throughout 2018, but particularly in the fourth quarter, investors became increasingly anxious about the prospect of a recession.  While many of the economic concerns contributing to the selloff remained, most asset classes recovered significantly in 2019.  However, the environment has become increasingly tenuous in recent months.

Key sources of uncertainty in 2018 included US/China trade negotiations and Federal Reserve Policy.  Unsurprisingly, these themes have continued to carry significant influence in 2019.

As Bad as It Seems?

Global growth is decelerating from 2018 highs, but consensus forecasts are calling for greater than 3% global growth in 2019 and we see 2.0%-2.5% real GDP growth here in the U.S. – slower yes, but recessionary no.  The U.S. consumer is gainfully employed, confident, and spending.  Business confidence and fixed investment spending have been softer, but that is largely reflective of the unknowns associated with the trade war.  Examining key recession indicators, we observe some mixed signals consistent with late cycle positioning.

It has been more than ten years since the financial crisis.  We find ourselves late in the economic cycle with heightened risk of recession in the next couple of years.  The question is not if we will experience another recession, but when.  This is always the case.  Economic recessions are more routine than most appreciate and recent examples like the tech bubble (2001) and the great recession (2008) cloud perceptions of the market experience typically associated with recessions.

Looking back nearly a century, the U.S. has experienced a recession about once every 5-6 years with the recession itself typically lasting about one year.  Importantly, U.S. stock returns have averaged 11% in the twelve months leading up to a recession and 20% in the twelve months immediately following a recession, while the average decline during the recessionary period has averaged just 4%.  Granted, peak-to-trough recessionary drawdowns were more severe, but also short-lived.

This means that on average, investors would have captured 8.5% annualized returns holding U.S. equities in the typical 3-year period beginning 12 months prior to recession and ending 12 months after recession.  Efforts to avoid a transient recessionary drawdown by timing the market come with a disproportionate risk of missing periods of growth essential to long-term wealth creation.

As vice president and director of investment research at Greenleaf Trust, Nick leads a team responsible for creating comprehensive investment solutions to help clients reach their financial goals. He is the chair of the investment committee, responsible for portfolio-level investment decisions and outcomes. Nick joined Greenleaf Trust in 2012 from Robert W. Baird & Company. He holds a bachelor’s degree in business administration from the University of Michigan Ross School of Business. Nick is a CFA® charterholder and a member of the CFA® Institute.