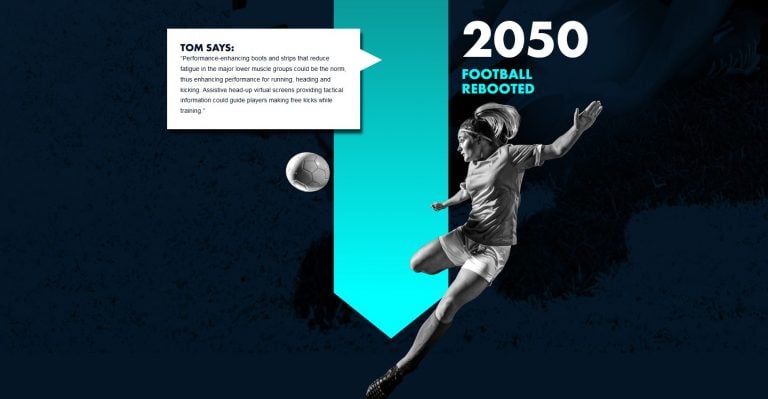 Technology is transforming sport at a lightning pace, and it’s accelerating every day. Imagine a world where in-game fitness monitoring becomes the norm in football, or if tennis players can boost their serve speed by 10% with a super-lightweight racquet.

Futurologist Tom Cheesewright has provided insight as to what the future holds for the world’s most iconic sports:

2018: Video Assistant Referee is a gamechanger

The International Football Association board officially approved Video Assistant Referee (VAR) for use in games. The technology made its World Cup debut in Russia.

In game player fitness monitoring, combining worn sensors with video gait analysis, will feed real-time information to coaches about fatigue and injuries. This means we could see players taken off before an injury occurs or excessive fatigue kicks in.

First introduced in 2002 to create a 3D representation of the path of the ball, Hawk-Eye continues to innovate. Using six high-tech automated cameras, the technology is designed to help analyse performance and assist training.

Halo is introduced in a quest to keep drivers safer and protect them from flying debris. All teams must now include the halo armour when building their chassis, which has in turn created problems with aerodynamics and stress distribution.

F1 racing will follow in the footsteps of Formula E and become entirely electric, which will offer greater race performance - only manufacturer lobbying could slow down this transition. An augmented reality driving environment could give drivers a sixth sense of competitors and car performance via a virtual display and body mounted actuators.

F1 cars will take on a radical shape change. A return to active downforce designs popular in the ‘70s is predicted as new materials, science, and careful track redesigns create super-safe cars that could hit speeds in excess of 300mph!!

The Intel RealSense 3D camera allows developers to build games that can adapt difficulty levels based on the player’s emotions, by scanning 78 different points on a person’s face.

Expect to see competitions redesigned for a mixed reality world, where both players and fans will operate in virtual reality arenas. Permission to use non-drug-based enhancements, such as electrical brain stimulation, could increase focus.

The line between e-sports and physical sports will blur, with elite e-sports athletes finding they need training regimes on a par with their traditional sporting counterparts in order to compete.

Intel has developed 3D athlete tracking to monitor runner performance in real-time. There are plans to utilise its ground-breaking technology at the Tokyo 2020 Olympics.

Expect real-time monitoring for runners where awareness around hydration, core body temperature, and respiration rates would be the norm. Training patterns will be driven by AI race strategists.

Owned by the Rank Group Plc, Grosvenor Casinos is a UK-based chain of 55 casinos located in major towns and cities across the UK, for more information please visit www.grosvenorcasinos.com.

For further information on the clubs and online, visit: https://www.grosvenorcasinos.com/

As one of the UK’s leading commentators on tomorrow’s technology, Tom helps individuals and organisations around the globe design futureproof plans in response to change. His foresight has seen him featured on the BBC, ITV and Sky News, as well as publications including The Guardian and The Times.