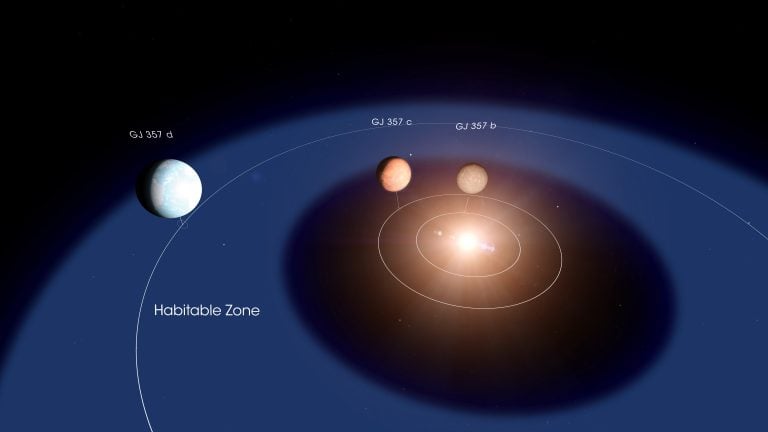 Using NASA’s Transiting Exoplanet Survey Satellite (TESS) researchers detected a potentially habitable super-Earth, as well as other planets orbiting the same star. The newly-discovered planet is located in the habitable zone, which means it has a favorable amount of sun to sustain liquid water, and is twice the size of Earth.

The newly-discovered planets orbit a star called GJ 357, classified as an M-type dwarf one-third the mass of our sun, and 40% cooler than our sun. It’s located 31 light years away from us, residing in the constellation Hydra. When researchers looked for the new worlds in February, they found that there was a star that dims every 3.9 days, hinting at the presence of transiting exoplanets. The transiting planet is referred to as a super and hot Earth because it’s larger compared to our Earth and closer to its host star.

“In a way, these planets were hiding in measurements made at numerous observatories over many years,” Rafael Luque, a doctoral student at the Institute of Astrophysics of the Canary Islands (IAC) on Tenerife who led the discovery team said in a statement. “It took TESS to point us to an interesting star where we could uncover them.”

“We describe GJ 357 b as a ‘hot Earth,’” explained co-author Enric Pallé, an astrophysicist at the IAC and Luque’s doctoral supervisor. “Although it cannot host life, it is noteworthy as the third-nearest transiting exoplanet known to date and one of the best rocky planets we have for measuring the composition of any atmosphere it may possess.”

While trying to confirm the presence of a potentially habitable super-Earth, researchers discovered two additional worlds. The farthest-detected planet is called GH 357 d and is particularly interesting to scientists.

“GJ 357 d is located within the outer edge of its star’s habitable zone, where it receives about the same amount of stellar energy from its star as Mars does from the Sun,” said co-author Diana Kossakowski at the Max Planck Institute for Astronomy in Heidelberg, Germany. “If the planet has a dense atmosphere, which will take future studies to determine, it could trap enough heat to warm the planet and allow liquid water on its surface.”

Without an atmosphere to trap heat, the equilibrium temperature of -64 F would hint at it being more glacial than habitable. This planet is 6.1 times Earth’s mass and orbits the star once every 55.7 days at 20% of Earth’s distance from sun. Scientists are still not sure of its composition or if it has a rocky surface.

The other planet, GJ 357 c, is the middle planet of 3.4 times the mass of Earth and it orbits the host star every 9.1 days. Its equilibrium temperature reaches 260F. Their findings were published in the journal Astronomy & Astrophysics.

Despite the transit method, scientists had to use ground-based measurements to confirm the existence of the potentially habitable super-Earth and its neighbors using the star’s radial velocity, which manifests as the speed of its motion along the line of sight. This is determined by observing the gravitational pull on the star, which can be seen as a small reflex motion which can be detected through changes in the starlight colors.