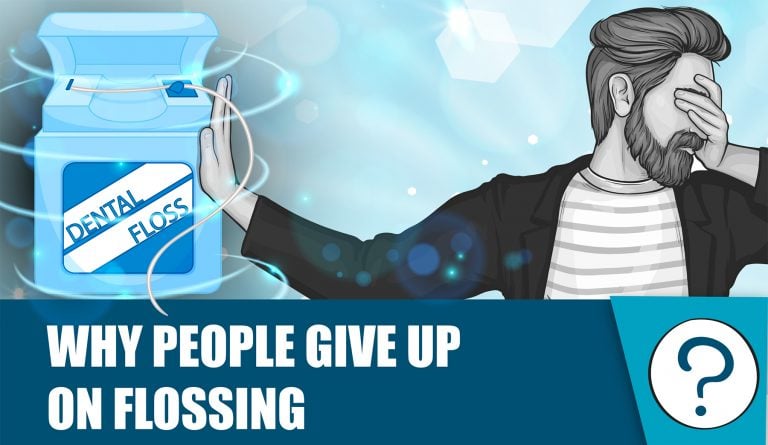 It’s no secret that the regular flossing of teeth is important for maintaining proper oral hygiene. But do people realize its importance? A new survey reveals that 31% of respondents have started but stopped flossing and the lack of time appears to be the most common reason for that.

31% of respondents have stopped flossing. No time is the main reason for 45% of them.

For a lot of people to make flossing a habit that will stick for good might feel like a New Year resolution that starts with good intentions but fades away quickly. DentaVox survey on flossing habits revealed that this is the case for more than one-third of respondents who used to floss regularly but stopped. Lack of time is cited as the most common motive to exclude flossing from oral hygiene routines. It could be argued whether ‘no time’ is a valid argument or just an excuse, especially considering how frequently they used to floss. Only 13% of respondents cleaned spaces between teeth with floss after every meal, and for 36% of them, it was not a daily habit. Furthermore, the survey results indicate that issues encountered during routines are quite unlikely to have discouraged flossing quitters as 43% of them did not report any problems.

Find out more on why people are giving up on flossing in the infographic below:

Majority of flossing quitters used to do it every day

31% of survey participants admit they used to floss regularly but dropped this habit. For 64% of them, regular was at least once a day and the majority of them used to floss in the morning and in the evening. In contrast, 36% of people who gave up on flossing practiced it occasionally, 2-3 times a week.

Lack of time and other reasons to toss flossing

Тhe majority of respondents claim that they stopped flossing due to lack of time. Time considerations emerge in other studies, as well. For example, according to a survey conducted in the United States, 55% of respondents reported that they do not floss regularly because it is too time-consuming.

Surprisingly, just 14% of DentaVox survey respondents found it ineffective and it was too difficult for only 12%. One in five respondents believed it could damage their teeth, gums or dental work, and this consideration is reflected in pinpointing gum damage as the most common issue experienced.

The majority of people who stopped flossing – 64% did not report any issues encountered during routines. Amongst the flossing quitters who experienced discomfort, one in three reported gum damage as the most common complication. However, as asserted by dental specialists, pink in the sink while flossing is often a symptom of gingivitis and not an injury to the gums, caused by the floss. In view of this consideration, future research could look into more details in how people with gum disease approach flossing and whether irritated or bleeding gums discourage them to perform it routinely.

DentaVox is a market research platform that collects opinions through paid surveys on a variety of oral health topics. It guarantees legit market statistics due to its anti-manipulation mechanisms and a growing number of respondents with blockchain-verified identities and varied demographics. Used by 36.7K respondents who have answered over 16 million questions, DentaVox is positioning itself as a trustworthy source for up-to-date dental market statistics, widely used by dental professionals, suppliers, media, students, and researchers.