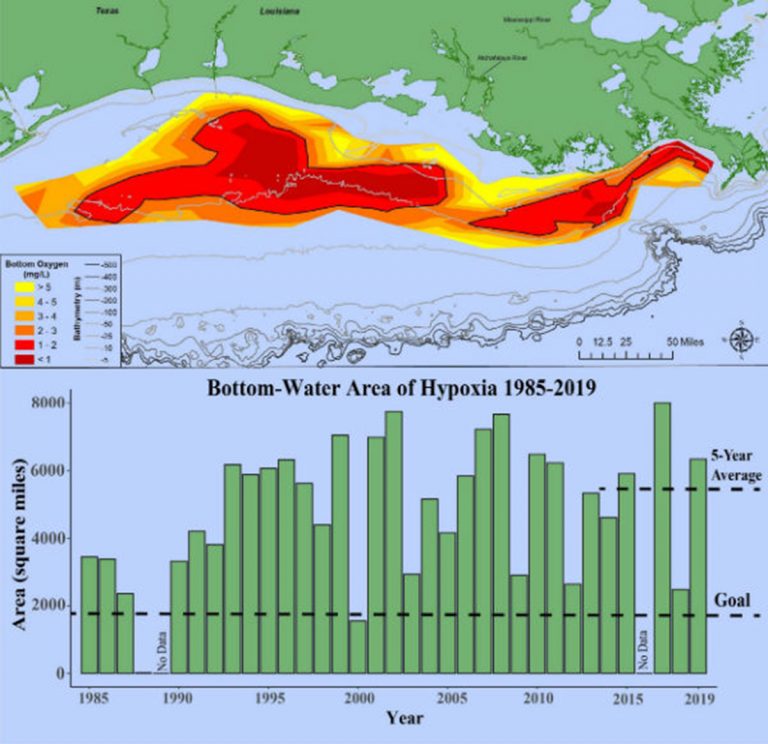 This year’s Gulf of Mexico “dead zone” – an area of low oxygen that can kill fish and marine life — is approximately 6,952 square miles, according to NOAA-supported scientists.

The measured size of the dead zone, also called the hypoxic zone, is the 8th largest in the 33-year record and exceeds the 5,770-square-mile average from the past five years. The annual survey was led by scientists at Louisiana State University and the Louisiana Universities Marine Consortium (LUMCON) during a research cruise from July 23 to 29 aboard LUMCON’s R/V Pelican.

In June, NOAA forecasted a near historic hypoxic zone of 7,829 square miles, close to the record size of 8,776 square miles set in 2017. The prediction relies primarily on the Mississippi River discharge and nutrient runoff data during May from the U.S. Geological Survey. With high discharge and nutrient loading this spring and summer, the models predicted a very large hypoxia zone to form during the time of the cruise. The forecast models, however, do not account for large mixing events such as storms, which are only predictable on shorter timescales.

This year, the passage of Hurricane Barry prior to the research cruise helped mix the water column over the Louisiana shelf, which proved to be a temporary disruption to the hypoxic zone that had already formed. Typically, the hypoxic zone changes in size throughout the summer, and when reduced during storms, as seen this year, usually increases once the water column restratifies.

“Past research indicates that hypoxia can take a week to reform in the summer after major wind events such as the recent passage of Hurricane Barry. We didn’t know what we would find when we went out to map the zone”, said Nancy Rabalais, Ph.D., professor at Louisiana State University and LUMCON, who led the survey mission. “We found that, despite the storm, the zone reformed and was in the process of rapidly expanding.”

Each year, excess nutrients from cities and farms in upland watersheds drain into the Gulf and stimulate massive algal growth during the spring and summer. The algae eventually die, sink and decompose. Throughout this process, oxygen-consuming bacteria decay the algae. The resulting low oxygen levels near the bottom are insufficient to support most marine life, rendering the habitat unusable and forcing species to move to other areas to survive. Exposure to hypoxic waters has been found to reduce the reproductive capabilities of some fish species and slow shrimp growth, leading to reductions in the average size of shrimp.

(Top) At 6,952 square miles, this year’s hypoxic zone in the Gulf of Mexico is the 8th largest ever measured in the 33-year record, measured from July 23 – 29. Red area denotes 2 mg/L of oxygen or lower, the level which is considered hypoxic, at the bottom of the seafloor.

The annual hypoxic zone size determination is a key metric used by the Mississippi River/Gulf of Mexico Watershed Nutrient Task Force to measure progress toward achieving the 5-year average target of 1,900-square-miles or smaller by 2035. As the survey cruise is only a snapshot of the hypoxic zone, calculating a 5-year average captures the true dynamic nature of the zone more than a single annual measurement.

“The data from this cruise are used by NOAA and its partners to help refine the models and more accurately simulate how river discharge, nutrient loads and oceanographic conditions influence hypoxic conditions in the Gulf and impact living resources,” said Steven Thur, Ph.D., director of NOAA’s National Centers for Coastal Ocean Science. “By understanding the scale and effects of these hypoxia events, we can better inform the best strategies to reduce its size and minimize impacts to our coastal resources and economy.”

The Task Force members are working together to achieve State led nutrient reduction targets across the Mississippi River watershed, with the ultimate goal of reducing nutrient inputs to the Gulf of Mexico. Efforts have focused on implementing comprehensive point and nonpoint source nutrient strategies combined with robust monitoring, progress reports, and outreach efforts.

“EPA is working with our Hypoxia Task Force partners to develop and implement practices that help reduce nutrient inputs to the Gulf,” said John Goodin, director of EPA’s Office of Wetlands, Oceans, and Watersheds. “The Task Force recognizes the challenge and continues to strive for greater progress.”

NOAA continues to study the impacts of hypoxia on fish and fisheries in the Gulf of Mexico through its Northern Gulf of Mexico Ecosystems and Hypoxia Assessment program, known as NGOMEX.

LUMCON’s Gulf Hypoxia website has additional graphics and information about this summer’s research mission as well as missions in previous years.

NOAA’s mission is to understand and predict changes in the Earth’s environment, from the depths of the ocean to the surface of the sun, and to conserve and manage our coastal and marine resources. Join us on Twitter, Facebook, Instagram and our other social media channels.