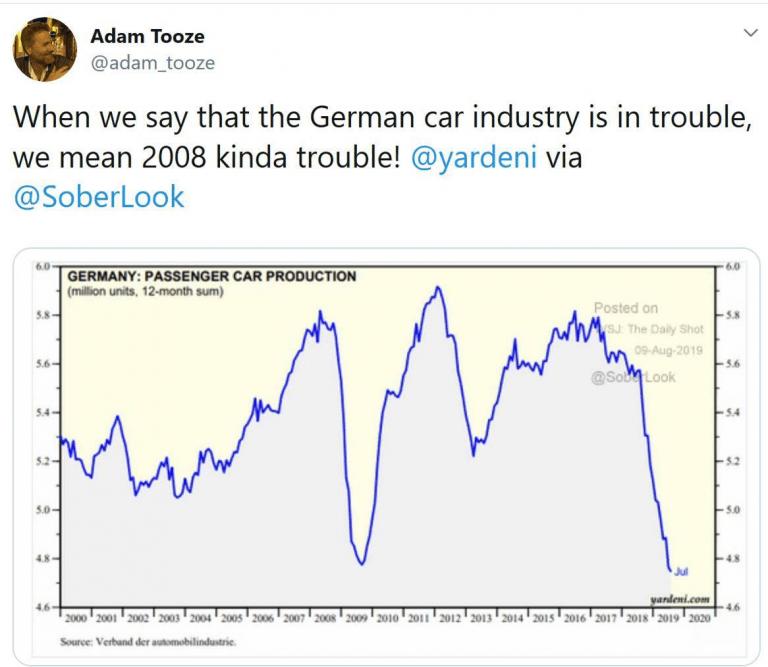 Whitney Tilson’s email to investors discussing if the German automakers are in trouble.

In my last email, I included this chart, which is highly misleading for two reasons, one obvious, one not:

The obvious reason (if you squint) is that the y axis doesn’t go to zero, so it appears that passenger car production has crashed by 80-90%, when in fact it’s gone from 5.8 million to 4.75 million…

The less obvious reason is that this chart (and the caption) would lead the reader to believe that Mercedes, BMW, etc. are in big trouble due to crashing sales, which is NOT the case – they’ve simply moved production out of Germany to other countries.

Here are comments from a friend:

German automakers have been moving production out of Germany. There are dozens of examples, but consider just a few:

So, German car production *in Germany* may be down. But SALES by the German automakers are somewhere around flat, perhaps up a hair, perhaps down the tiniest of hairs, depending on the recent month/quarter etc.

Indeed, the German automakers trading at the lowest equity prices in over a decade, but this isn’t because unit sales volumes have declined. In fact, they’re UP! Not by much, of course, but when you see a sharply declining equity price index like that, attributable to the car industry, you would naturally assume that unit sales volumes are down. Basically, it would be following a major recession (or worse, such as what we had 2007-2009.

But not so! The profit margins are down because of declining margins, not declining unit sales volumes or even revenue. The volumes are approximately flat from last year. VW will sell over 10.6 million cars this year, down only 2.8% from last year thus far, and most of that decline may be in those unprofitable Chinese 50/50 JVs anyway. BMW’s sales are up. And so forth.

The reason these stocks are in the toilet is that they are having to spend huge amounts of money selling cars that people don’t want to buy at standard margin prices. Politicians from China to Europe to a dozen U.S. states have mandated that so-and-so many electric cars must be sold.

It’s like the government telling Apple that for every four iPhones sold, it must also sell an iPad. Well, if that’s more iPads than people would have bought voluntarily, then Apple must discount iPads from $279 to $199 or $99 or whatever -- and lose money on them. If Apple was forced by various governments around the world to sell products at a loss, what would happen to Apple’s stock price?

This policy is therefore quite simply one of “mandated losses” -- the government writing laws that ensure that automakers cannot make as much money as they would normally do. The question is only what the level will be -- a small profit, or a loss that would cause layoffs and eventually bankruptcies.

To understand the insanity of this policy, simply imagine it applied to any other industry. It’s asinine as far as margins are concerned.

I’m reminded of a political slogan that took place several decades ago, when I was a young person, in a country far, far away. It was about a new proposed simplified tax filing form, which had only 3 lines:

That’s pretty much what’s facing the automakers selling into those heavily regulated markets now -- China, Europe and several U.S. states -- except that line 2 may not be limited to what’s left.