Whitney Tilson’s email to investors discussing the Fed cut and why we should fear easy money; more on Beyond Meat Inc (NASDAQ:BYND); his diet.

1) Yesterday the Federal Reserve, as expected, cut interest rates for the first time since 2008. Normally, stocks rise on interest rate cuts, but instead they tumbled because the Fed failed to indicate that the move was the beginning of a rate-cutting campaign.

This may be good news, however, as this op-ed in the New York Times argues: Why We Should Fear Easy Money. Excerpt:

All these creatures of easy credit erode the economy's long-term growth potential by undermining productivity, and raise the risk of a global recession emanating from debt-soaked financial and housing markets. A 2015 study of 17 major economies showed that before World War II, about one in four recessions followed a collapse in stock or home prices (or both). Since the war, that number has jumped to roughly two out of three, including the economic meltdowns in Japan after 1990, Asia after 1998 and the world after 2008.

2) Following up on Tuesday's e-mail, in which I predicted that the shares of Beyond Meat would fall by half to under $100 by year-end, here's a chart from Barclays Research and Men's Journal showing that the vegan burgers made by the company and its competitor, Impossible Foods, have similar calories and much more sodium than a plain old beef burger... 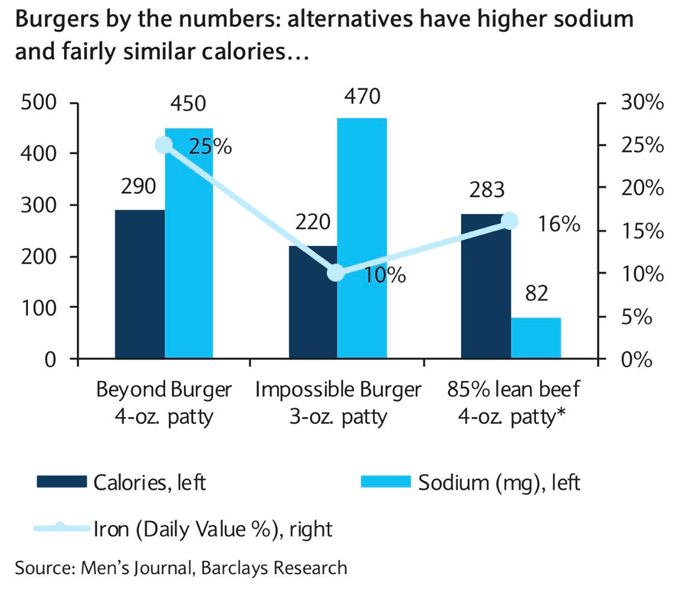 That said, there is a compelling case to be made for Beyond Meat, Impossible Foods, and "alt meat" in general, as this article highlights: This Is the Beginning of the End of the Beef Industry. Excerpt:

Part of the appeal of the new burgers is their smaller environmental footprint. Beef is the most wasteful food on the planet. Cows are not optimized to make meat; they're optimized to be cows. It takes 36,000 calories of feed to produce 1,000 calories of beef. In the process, it uses more than 430 gallons of water and 1,500 square feet of land, and it generates nearly ten kilograms of greenhouse-gas emissions. In comparison, an Impossible Burger uses 87 percent less water, 96 percent less land, and produces 89 percent fewer greenhouse-gas emissions. Beyond Meat's footprint is similarly svelte...

This year is shaping up to be the inflection point when this becomes obvious to everybody else. Beyond Meat's products are in 15,000 grocery stores in the U.S., and its sales have more than doubled each year.

Beef is a headache. It comes with a lot of baggage to worry about: antibiotic resistance, E. coli outbreaks, animal welfare, climate change. It's the kind of icky biological variable that corporate America would love to leave behind – and as soon as beef becomes less profitable, it will.

Recent projections suggest that 60 percent of the meat eaten in 2040 will be alt, a figure I think may actually be too conservative. An estimated 95 percent of the people buying alt burgers are meat-eaters. This is not about making vegetarians happy. It's not even about climate change. This is a battle for America's flame-broiled soul. Meat is about to break free from its animal past.

To be clear, I want Beyond Meat, the company, to succeed. But its wildly overhyped and overvalued stock almost certainly will not...

3) Speaking of healthy (and unhealthy) foods, and following up on my e-mails last week on Cutting 300 Calories a Day Shows Health Benefits and breaking my candy addiction...

Other than cutting my candy consumption by 90% a few years ago, I haven't made any changes to my diet. I simply eat modest amounts of healthy food most of the time. I still have a sweet tooth (my latest weakness is barkTHINS – yum!), but I don't eat out much and my wife cooks healthy food at home.

We've always tried hard to never make food or dieting an issue in our home. I've never worried for an instant that our three daughters (now ages 23, 20, and 17) might become addicted to alcohol or drugs. But eating disorders scare the living daylights out of me. I think it's the single greatest risk factor for teenage girls, especially in places like our home on the Upper East Side of Manhattan, where there's this awful culture of thinness.

Another thing I try to do is not overeat. I used to feel like I had to clean my plate, but now when I'm full, I do my best to stop. If I'm eating at home and have served myself too much food, I'll put the excess in the refrigerator to eat later. And when I'm eating out, I find that portions are so big that I usually bring a doggie bag home. Sometimes the food just sits there and I end up throwing it away... but that's better than overeating.