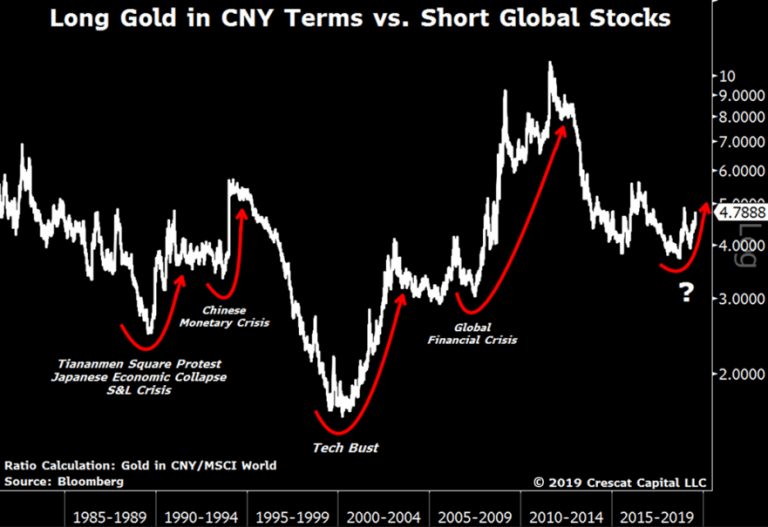 Crescat’s “macro trade of the century” has just heated up significantly in August. In just the first two and a half trading days of the month, the Crescat Global Macro fund is up an estimated net 15.6% net MTD while the S&P 500 is down approximately 4.9%. All three legs of our macro trade have been working remarkably well:

We believe this macro trade is only in its early stages. It represents about 80% of the underlying exposure in our flagship global macro hedge fund. Our Chinese currency short exposure in that fund includes puts on the yuan as well as the Hong Kong dollar. We are seeking alpha above these macro benchmarks through individual security selection based on our equity models.

Inverted yield curves around the world have been signaling major trouble ahead for financial markets as we have been highlighting in our recent letters. In the US, we are now in the longest economic expansion ever, but it has come at the cost of record asset bubbles. As we have shown, US stocks are at historic high valuations relative to underlying fundamentals across eight comprehensive measures. We also see excessive valuations in private equity and corporate credit. These prices are not justified even considering today’s historically low interest rates. Last week, the ongoing US yield curve inversion finally forced the Fed’s hand into a new easing cycle. Such a move, pressured by the bond market, is anything but bullish, and it’s certainly not acting like the “insurance cut” advertised by Chairman Powell. Instead, it’s a sign that our central bank is literally behind the curve. More ominously, it’s an indication that asset bubbles are poised to burst, just like the Fed’s first interest rate cut warned us directly ahead of both the tech bust and global financial crisis.

Why do yield curve inversions matter? They matter because, normally, investors demand a term premium to hold long-duration assets like stocks, bonds, private equity, and real estate compared to more liquid, short-term investments. Therefore, most of time the yield curve is positively sloped. In asset bubble markets, by contrast, speculators drive up the prices of long duration assets bringing years of future returns on them into the present.

When a central bank raises interest rates, it theoretically entices investors to move money from long-duration assets into safer, more liquid, short-duration assets. But monetary tightening works with a lag, so rates need to be hiked early enough in an economic expansion for central banks to prevent asset bubbles from forming in the first place. If the tightening comes too late, when speculation in long duration assets is already excessive, the yield curve will invert warning of an impending financial market crash and recession.

In the US, we have already had more than three years of monetary tightening late in the expansion, but asset bubbles in long-duration financial assets have only become more extreme, at least up until the first rate cut last week. The Fed’s tightening cycle meanwhile has already had a cooling effect on the global economy as well as US corporate earnings. The US consumer and the jobs market have remained strong, but such has been the case immediately ahead of every major business cycle downturn. High consumer confidence and low unemployment go hand in hand with asset bubbles. They are contrarian indicators at major market tops just ahead of recessions. That is how we treat them in Crescat’s macro model. When these measures turn from cyclical extremes, they deteriorate quickly.

Last week, the bond market acted like an equity crash has already been unfolding on the heels of the Fed rate cut. We say this because the only other two times when the Fed cut interest rates and the 10-year yield plunged as much as it did last week was during the 1987 crash and the global financial crisis. A major crash like those hasn’t happened yet, but stocks have been slipping, and with the yield curve as inverted as it is today, the bond market is clearly signaling that a bear market could be close at hand. Last week, stocks sold off for three straight days starting the day of the Fed cut. Stocks are down again today through mid-day on the news of the China yuan breach. We think the Wall Street adage, “buy the rumor, sell the news”, applies. We believe the smart money has already been selling stocks for a while now. It’s the big dumb money that we need to worry as it inevitably tries to crowd out of its over-weighted, illiquid, long-term, bubble-priced investments into a liquidity vacuum. Such is how markets crash and why we want to be fully positioned ahead of the crowd. 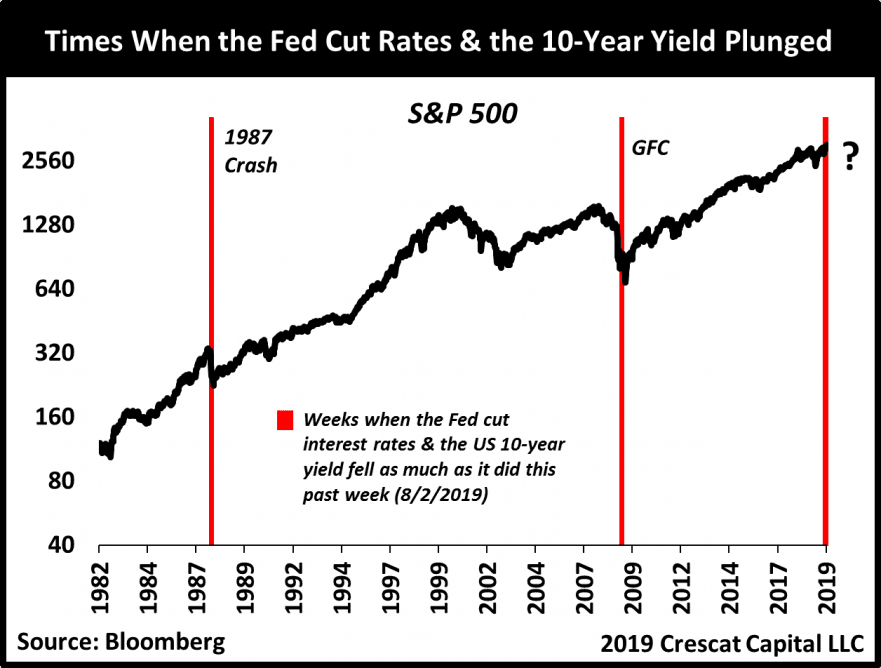 Asset bubbles lead to busts that turn into economic recessions. In the last two decades, investors should have learned this lesson after the tech and housing busts, but people have short memories. Yield curve inversions are warning signs. Crescat has identified and been writing about three major manifestations of them around the world:

In all our strategies, Crescat is long precious metals and/or precious metals mining stocks which we believe are substantially under-valued relative to the global fiat monetary base. We believe precious metals are now entering a new secular bull market. The world is now in a globally coordinated interest rate easing environment, some might say a new global currency war. As a result, real interest rates are plunging which is a substantial new catalyst for gold and silver, even before it turns into an inflationary cycle. 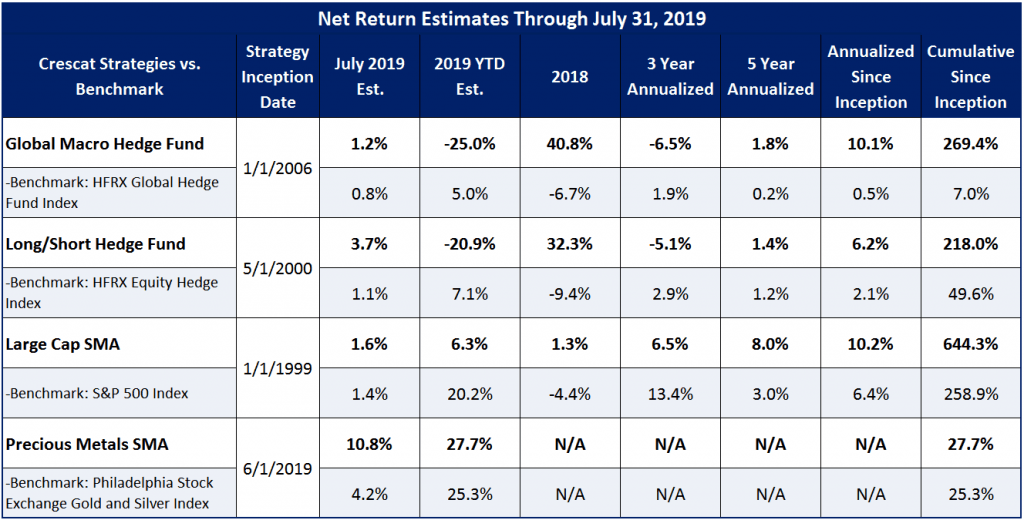 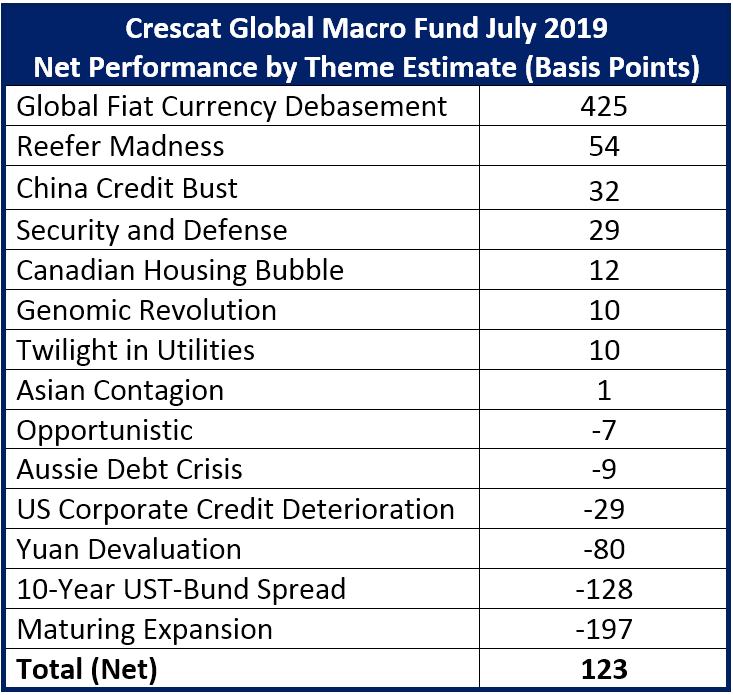 After the pullback year to date through June in our hedge funds, we believe our recent surge in August is only the beginning of a new run for all Crescat’s strategies that should play out for bigger gains and a strong finish through year end and into 2020. That is our goal. We believe the fundamental underpinnings of the recent market moves are strongly backed by Crescat’s well-developed macro themes and models. We have been writing about many of our current themes in our letters for the last several years. We have stayed committed to most of them because our models have been telling us to. We believe they will bear much fruit as we complete a bearish cyclical downturn in the global economy.

Crescat’s new Precious Metals separately managed account strategy which we launched in June has been off to the races by the way. That SMA composite was up 20.2% net in its first two months as we show in the table above. It is up another estimated 8.8% net so far in August. It’s an official Crescat strategy and is open to non-accredited as well accredited investors.

We encourage you to inquire about any or all our strategies by contacting Linda Carleu Smith, [email protected]