The report is a bit lengthy, but here are a few quick bullets:

We are concerned The Middleby Corp (“Middleby” or “the Company”) is significantly overvalued; we believe shares could fall more than 25.0%.

Middleby’s story starts with former CEO Mr. Selim Bassoul. Mr. Bassoul joined Middleby in the mid-1990’s and helped turnaround one of the Company’s floundering core divisions. In 2001, Mr. Bassoul was promoted to CEO; Middleby had a market capitalization of $40.0 million. Over the next two decades, Mr. Bassoul was instrumental to Middleby’s continued turnaround and meteoric share price appreciation driven by M&A. Today, Middleby’s market capitalization is ~$7.5 billion.

In the last ten years, Middleby Corp acquired over 50 companies for an aggregate of $3.2 billion. Beginning in late FY 13/early FY 14, we started to notice a concerning trend; acquisitions were getting progressively larger and more expensive but had slower revenue growth and were less profitable. This coincided with several other red flags: (1) organic revenue growth started to diverge significantly from reported growth, (2) adjusted free cash flow went negative and got progressively worse, (3) executive compensation targets were changed from return on equity (ROE) and share price metrics to absolute EBITDA and earnings growth, and (4) insiders (including Mr. Bassoul) meaningfully divested shares and beneficial ownership reached decade lows. Despite these red flags, shares continued to rise and are near all-time highs as the Company has been able to show “strong” reported revenue and “consistent” free cash flow growth.

However, we believe FY 19 is shaping up to be one of the most challenging years yet. Specifically:

Consequently, we are concerned FY 19 consensus expectations for low-double-digit revenue growth and reacceleration of EBITDA margin expansion to near peak levels is overly optimistic. Based on Middleby’s current valuation, FY 19 P/E of 20.8x and EV/EBITDA of 13.7x, we believe there is significant downside risk. Using conservative estimates that assume revenue will grow mid-single-digits and EBITDA margin will expand with slight multiple contraction to be in-line with peers (but still above market averages), we believe shares could fall more than 25.0%. 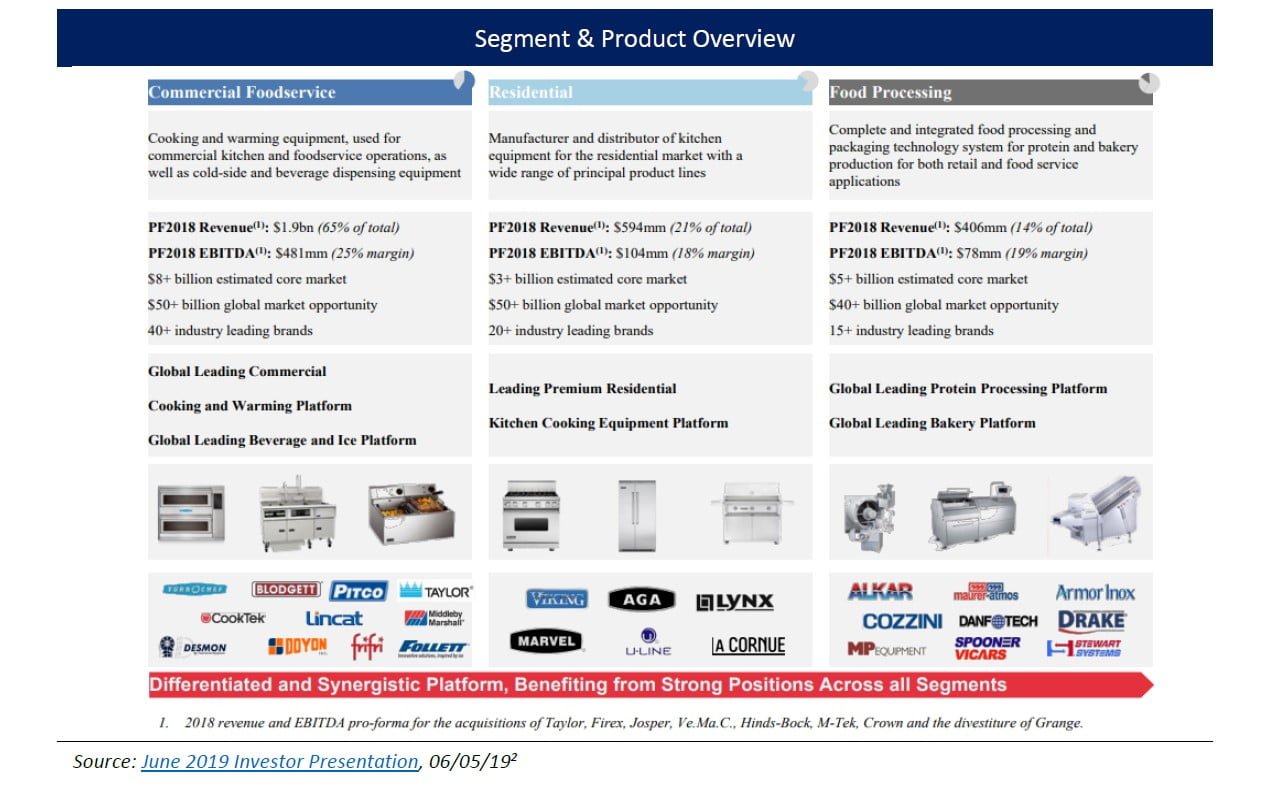 US/Canada/Europe accounts for ~90.0% of revenue

The majority of the Company’s revenue is generated in developed markets (i.e. US, Canada, Europe). Over the last three years, revenue from the US & Canada (Asia, Europe & Middle East, Latin America) was relatively stable at ~67.0% (~33.0%). 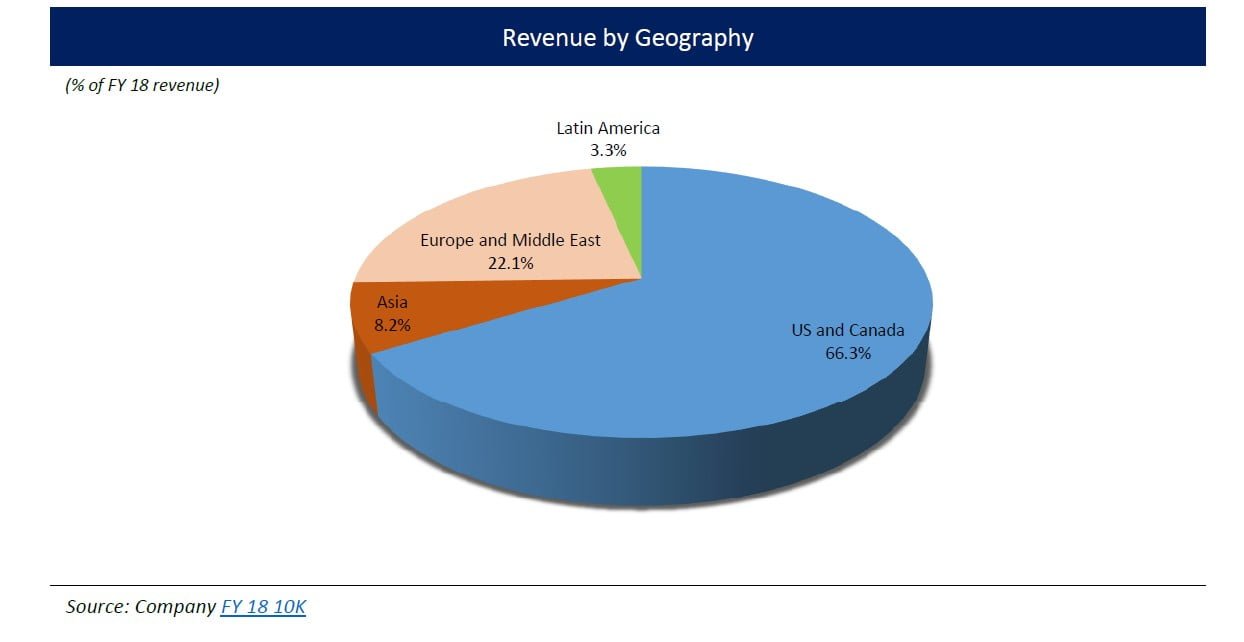 Middleby has made more than 50 acquisitions since FY 09

Since the early 2000’s, shortly after Mr. Selim Bassoul was instituted as CEO, Middleby pursued an acquisition heavy strategy to expand its portfolio of brands and technologies. Typically, acquisitions were made to add complementary products and/or services. Over the last six years, the strategy became increasingly more aggressive in both the size and quantity of acquisitions.3

Majority of M&A financed through debt; leverage ratio near peak levels at just under 3.0x

Since FY 04, Middleby’s leverage ratio ranged from ~1.0x to 3.0x. Currently, the leverage ratio sits just under 3.0x. In its Q1 19 10Q, the Company indicated the terms of its Credit Facility allowed a maximum leverage ratio of 3.5x, which may be adjusted up to 4.0x in connection with a qualified acquisition.

Since the early 2000’s, M&A has been an integral part of Middleby Corp’s growth strategy. For context, the Company acquired over 50 companies in the last ten years for an aggregate of $3.2 billion; Middleby’s market capitalization is ~$7.5 billion. Beginning in late FY 13/early FY 14, we started to notice a somewhat concerning trend; acquisitions were getting progressively larger and more expensive but had slower revenue growth and were less profitable. We believe this trend not only extends the time required to achieve similar returns on investment to historical M&A, but also increases the risk of overpayment and/or acquisition underperformance relative to initial expectations. In addition, the largest and most expensive acquisition (the Taylor Company was acquired in Q2 18 from United Technologies) appeared to diverge from Middleby’s historical strategy of acquiring private businesses from founders and/or generational owners. We believe this shift in strategy creates an even more challenging environment to execute sustainable margin expansion opportunities and realize a comparable return on investment relative to prior acquisitions.

Commercial Foodservice accounted for over 60.0% of M&A; Residential Kitchen for over 25.0% 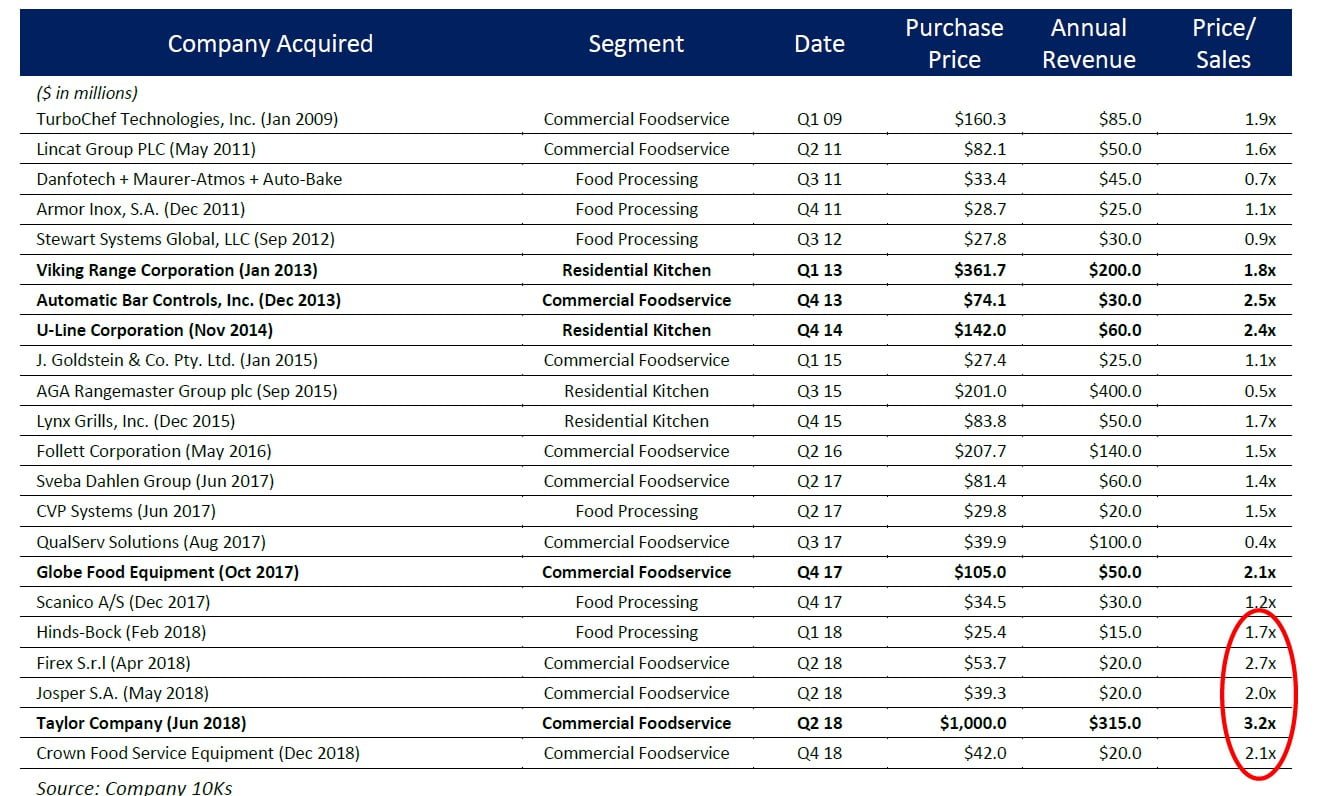 The Company’s pro forma results assume acquisitions made in the current and prior year were all completed on the first day of the prior fiscal year. For example, pro forma results for FY 18 assumed the 2017 acquisitions of Burford, CVP Systems, Sveba Dahlen, QualServ, L2F, Globe, and Scanico and the 2018 acquisitions of Hinds-Bock, Ve.Ma.C, Josper, Firex, Taylor, M-TEK, and Crown were all completed on January 1, 2017 (the first day of FY 17).

Taylor acquisition appeared to be acquired from UTX via unsolicited bid; UTX sold because it was a “good price point”

The acquisition of Taylor is highly strategic for Middleby and bolsters Middleby’s overall position as an industry leader in commercial foodservice. Taylor is a unique and premium brand in the commercial foodservice industry with leading positions in beverage, frozen dessert and grilling that are highly complementary to our existing offerings. Taylor products are well represented across the top restaurant chains and have significant presence across all foodservice segments including quick serve, casual dining, retail, convenience stores, and institutional foodservice establishments. (Press Release, 05/18/18)

At its Investor and Analyst meeting on 03/16/18, United Technologies indicated it would begin a strategic review of its portfolio during the summer (after the Rockwell Collins acquisition closed) to decide whether to spin into three companies; standalone Otis, standalone Climate, Controls, and Security (CCS), and an aerospace business.

However, at the Electrical Products Group Conference on 05/22/18, United Technologies highlighted the Taylor divestiture was not the portfolio optimization it had previously been thinking about, but it was a “good price point” to sell.

CEO Mr. Gregory J. Hayes: After the first quarter call, we said we're not going to really talk about this because our focus for the intermediate term, of course, is closing Rockwell, right? So while we are doing work in the background on portfolio and looking at that, the real focus of the company is today, and will be for the next several months, getting Rockwell closed and getting the integration underway. Having said that, we will undertake with the board a thorough investigation of the overall portfolio. Now I think some of you may have seen over the weekend, we closed on a deal to sell our Taylor equipment business to Middleby Corp for $1 billion. That was not the portfolio optimization we were thinking about, but...

Consequently, we believe Middleby Corp may have made an unsolicited bid to acquire Taylor. This is somewhat of a departure from Middleby’s historical M&A strategy. For the most part, Middleby has acquired privately held businesses. We believe this shift in strategy is significant for a few reasons.

First, United Technologies has publicly discussed portfolio optimization in addition to receiving pressure from large activist investors. Based on our research and commentary from United Technologies, we believe it did not intend to divest Taylor. So, United Technologies had no reason to sell unless the price point was ideal; which we believe to be the case given United Technologies’ commentary. Second, in our experience, there are typically more margin expansion opportunities by acquiring privately held businesses from founders and/or generational owners than from public companies (and/or private equity). The level of scrutiny on public company performance, whether it be from the Board of Directors, analysts, shareholders, activist investors, etc. is significantly higher than that of a privately held company. We are concerned both these factors coupled with Taylor being the largest and most expensive acquisition to date significantly increases the risk of acquisition overpayment and/or ability to generate sustainable margin expansion.

Middleby Corp does not disclose revenue by customer given its customer base is relatively large with minimal concentration. However, in its Investor Presentations the Company regularly includes a slide with its “Premier” Commercial Foodservice (the largest segment) customers of which many are publicly traded companies. Aggregate public “Premier” customer capex ebbed and flowed over the last decade; since FY 15 capex consistently trended upward reaching peak levels in FY 18. Currently, consensus estimates anticipate a severe drop in FY 19 capex followed by two more years of declines in FY 20 and FY 21. In fact, the FY 19 rate of change decline is the largest in over a decade. In addition, capital goods new orders and restaurant sales data from the US Census Bureau continued to rapidly decelerate over the last year. We believe these dynamics put Middleby and overall demand in a precarious situation that isn’t currently accounted for in revenue expectations.

In its Investor Presentations, Middleby Corp regularly included a slide with its “Premier” Commercial Foodservice customers; which included a number of publicly listed US companies.5 Accordingly, we aggregated historical and future (based on consensus estimates) capital expenditures (capex) for this subset of Middleby’s “Premier” customers. In FY 18, aggregate “Premier” customer capex increased 32.2% year-over-year to ~$6,380.0 million, the highest level and fastest growth rate since at least FY 09. However, current consensus estimates expect “Premier” customer capex to decline in each of the next three years. More importantly, the expected FY 19 decline of 9.3% would result in the fastest rate of change decline in over ten years (32.2% increase + 9.3% decline = 41.5% rate of change). 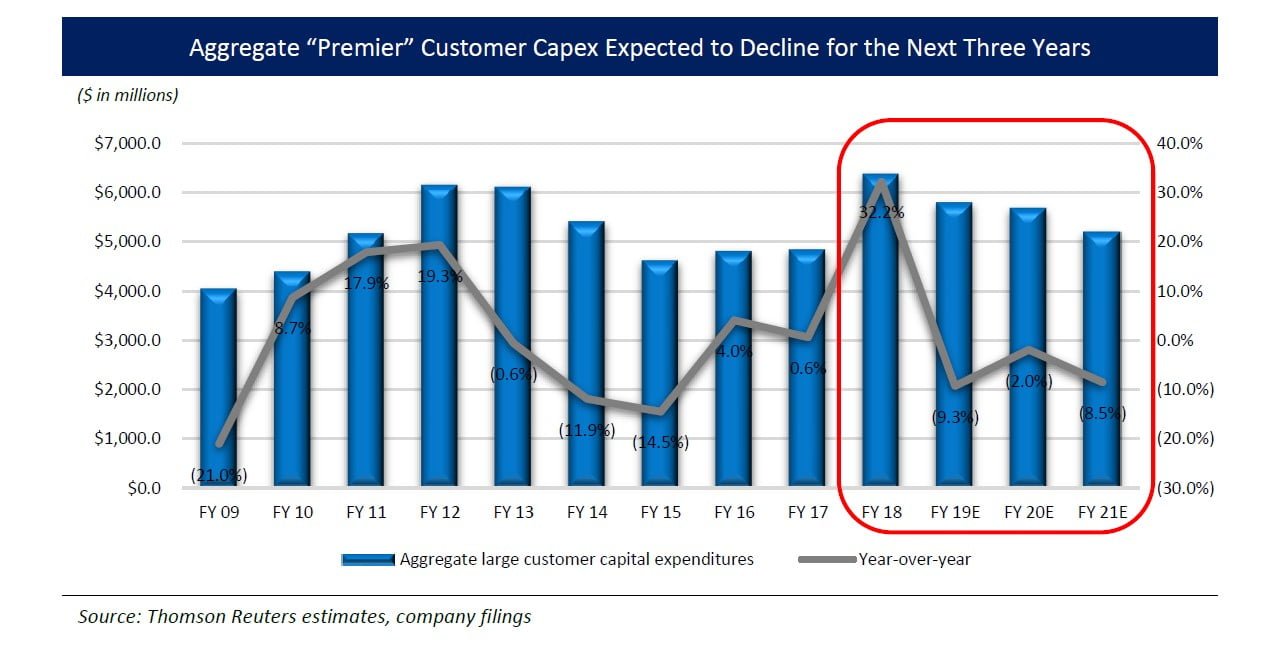 See the full report below.