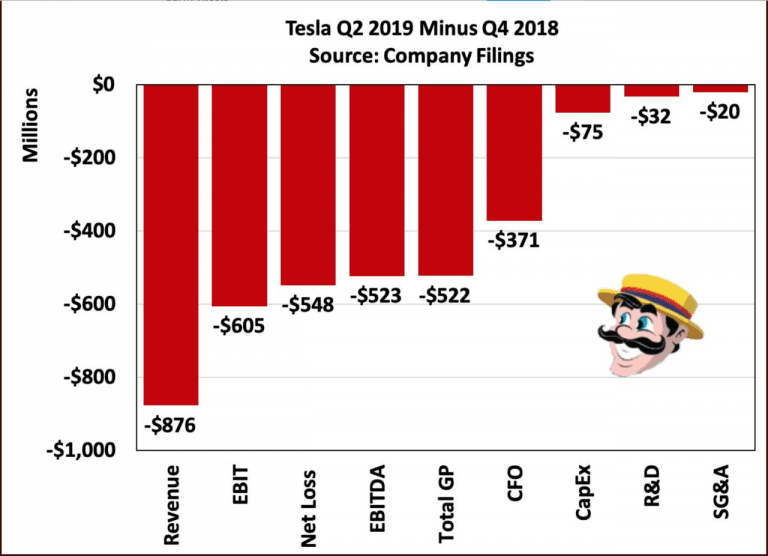 1) The weirdest part of the call was this:

Yes, thank you. I was wondering if you can comment about whether you felt that Q2 benefited from consumers in the U.S. sort of rushing out to buy Model 3 in advance of the declining federal tax credit, a phenomenon that you sort of saw in Q4. And part of the reason I ask is, at least by my analysis it looks like maybe 70% of the Model 3 sold in the quarter were in the U.S., which is sort of higher than your normalized percentage of U. S. sales. And so, do you feel that that phenomena may have occurred in Q2? And are you still confident that Q3 deliveries can improve sequentially? And beyond the data point that you provided on the call that the orders quarter data are better than last quarter, is there anything else you can point to that provides that confidence?

Yeah, I think we'll -- demand in Q3 will exceed Q2. It has thus far, and I think we'll see some acceleration of that. So -- and then, I think Q4 will be, I think very strong. So, we expect that quarter-over-quarter improvements. I think Q1 next year will be tough. I think Q3 or Q4 will be good, Q1 will be tough. Q2 will be not as bad, but still tough. And then I see like Q3 and Q4 next year will be incredible.

Here’s Anton Wahlman’s take on the implications: Why You Must Dump Tesla Stock Here. Excerpt:

If you're a sell-side analyst, a fund manager or a growth investor and Tesla's CEO just told you that 2020's first half will be very weak, what should you do? You can't possibly own this stock now. You must get out.

2) Two friends had a discussion about this. First one:

My theory is that Musk has lied about Q4 2019 anyway -- it won't show a profit.  Then, he was somehow hit by a stream of consciousness, thinking it would sound better if he said that 2020 too would be back-end loaded ("Hey, almost every year is, isn't it -- remember 2018?).  Whether this had any anchor in truth or not, I don't know.  I am assuming everything will be worse than he says, for all quarters going forward.

The thing about a liar such as Musk is that he often forgets what he lied about before.  He had forgotten what he had said about Q4 2019, and why or whether anything he said about first half of 2020 would fit, or at least be in need of an explanation.  You could tell he was just winging it with his thoughts there.  They weren't part of any notes.  Sometimes he just says things that makes no sense.  This was one of those times.

There is no reason I know of why q3 or q4 should improve. They basically said they got labor out of the system and scrap is down to nothing.

The Street won't forgive him if he's guided to breakeven in Q3 and the loss isn't at least meaningfully smaller than it was in Q2.  The stock would go to $150 if Q3 losses exceed Q2’s.  They will pull out all the stops, apply any accounting gimmick, to show a loss that's smaller than $300 million.

I think Q4 will be worse than Q3.  Why?  Because time is not on Tesla's side, at least not right now:

Once people see these things, it will be harder to hawk a Tesla -- especially if not attached to even larger discounts.

And then we have numerous other surprises you will see from Mercedes, GM, Nissan, Hyundai, Kia, Jaguar Land Rover and others.  Hey, the Frankfurt Auto Show is September 9!

I want to add to the comment on the importance of JB leaving because the main technology in Tesla cars is the battery, which was JB's focus. The future depends on the relationship with Panasonic, who seems to have had enough of Elon.

JB stepping down should not have been a surprise as the interplay at the shareholder meeting indicated Drew Baglino was going to take over, and JB has been selling shares as fast as he could with his 10b5-1 sales of several million dollars every period. Now he can probably sell what else he has, once he claims not to possess Meaningful Non-Public Information. Doug Field waited 3 months or so. I was watching the after-hours session when it was announced, and shares moved from down $20 to down $27, so the market did make that specific part of the dump on the announcement and so it was not all priced in. He has been out of sight for quite a while except for these events. He started Redwood, a materials recycling business, that doesn't sound so high tech as new battery chemistry. He may have been a calming influence with Panasonic, and that relationship is both crucial and not as smooth as it should be. He was the only well-known figure from the early days. Now it’s all Elon.

Attaching two screenshots that to me sum things up.

Free cash flow was impressive, but not when you realize that to achieve it, Tesla sold down inventory (not sustainable, obviously) and slashed Cap Ex to below its D&A. (We'll need to see the Q to know more.)