Logos LP commentary for the month of July 2019, titled, “The Disciplined Pursuit of Less.”

Despite Friday’s losses, the major indexes posted solid weekly gains. The Dow and S&P 500 rose more than 1% each this week while the Nasdaq gained nearly 2%. Stocks also posted all-time highs on Wednesday.

Summer is upon us and the market has so far continued to reward the bulls after what has been a great first half of the year. In fact, we just witnessed the best June for the S&P since 1955. Pretty impressive given the noise we heard from the “Sell in May crowd”. The latest market high was the 210th for the S&P 500 since 2013. Funnily enough, for those paying attention, every one of them was called THE top…

Having said that, we are finding it more difficult than ever to find fairly/under priced assets of ANY kind. Looking across public, private, alternative and real estate markets we see little opportunity for outsized returns moving forward.

The balance of probabilities is beginning to tilt to the downside rather than to the upside as most of the silver bullets have been fired: tax cuts, rate cuts, accomodative monetary policy, share buybacks and animal spirits. What drives earnings higher and further multiple expansion we are beginning to become unsure...at the end of the day as Michael Batnick has recently reminded us the last 10 years have been the best ten ever for U.S. stocks: "Can this bull market continue? Yes, of course. It’s already gone on longer than many people thought it would, myself included. But is it likely to be as strong as it was over the last ten years? No, almost certainly not."

In other news our CIO Peter was featured on MOI Global to discuss Zscaler.

Last month I took a much needed week off and early into my European vacation, something startling occurred: my cellphone vanished. As someone typically attached to their phone, as a “necessary work evil”, my initial reaction was panic.

I saw my options as two-fold: 1) get a new phone 2) spend my week of vacation without a phone and use my laptop which I had with me to periodically check emails

After a bit of deliberation, looking out over the Mediteranean, I decided to choose option 2. I found the first day without my phone hard. I became acutely aware of the habit I had built up which many of us seem to share: the urge to reach for my phone. I felt it on numerous occasions. At times precipitated by seeing my friends reaching for/looking at their cell phones and at other times simply a habit in which I would feel myself reaching for my phone only to find nothing to grasp.

As the days rolled by, the habit began to fade. Instead of yearning for my phone seeing others on theirs, I began feeling more intimately connected with the present moment. Riding in a taxi became about observing the beauty of the scenery as it flashed by and laying on the beach became about reflecting on my life, rather than scrolling through emails, reading the news or worse scrolling through curated images and videos of other people’s lives.

What I learnt in my week without a phone was the following equation:

This isn’t to say I didn’t get a phone when I returned from my vacation, but it is to say that my experience brought to my attention what Greg McKeown has dubbed “the clarity paradox”.

The clarity paradox can be summed up in four phases:

Phase 1: When we really have clarity of purpose, it leads to success.

Phase 2: When we have success, it leads to more options and opportunities.

Phase 3: When we have increased options and opportunities, it leads to diffused efforts.

Phase 4: Diffused efforts undermine the very clarity that led to our success in the first place.

Curiously, success can be a catalyst for failure. When we reach a certain level of success, we often then pursue more of it in an undisciplined way. We become attached and get side tracked. We get off course attracted by the allure of the “next opportunity” or “next thing”.

What my cell phone experience opened my eyes to, of were phases 3 and 4 of the clarity paradox. Unenlightened about our phone’s ability to clutter our minds with increased options and opportunities, we often allow our attention to be diffused at best, or completely monopolized at worst.

It's no surprise to me that in a recent article on CNBC, the biggest complaint millennials had about their lives is: “I have too many choices and I can’t decide what to do. What if I make the wrong choice?”.

When faced with too many choices:

Now home with a new phone, armed with a more enlightened understanding of its impact on my psyche, I’ve resolved to do things a bit differently in my personal and professional life, to engage in the “disciplined pursuit of less”:

Whether as an organization or as an individual the ability to establish and maintain clarity will have an enormous impact on whether outcomes will be positive or negative. Purposefully having the courage to address “the undisciplined pursuit of more” by practicing “the disciplined pursuit of less” will differentiate your outcomes from the crowd, whether you throw your cellphone to the wind or not.

The current expansion has just tied the 1990s' expansion for the longest in history, and then anything after that will be a record. Good news, but the recovery has also been the weakest.

Monthly data from the Conference Board showed that the leading versus coincident indicator ratio was down slightly on the month. 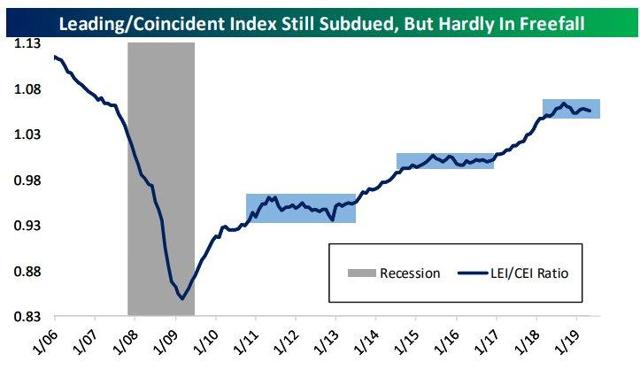 Household debt in the USA may be at record levels yet household debt as a percentage of personal income is at a 40 year low.

"An intense love of solitude, distaste for involvement in worldly affairs, persistence in knowing the Self and awareness of the goal of knowing-all this is called true knowledge.” -The Bhagavad Gita