ValueWalk
Home Business Gold Stocks May Have Room To Run With Spot Prices At 5-Year... 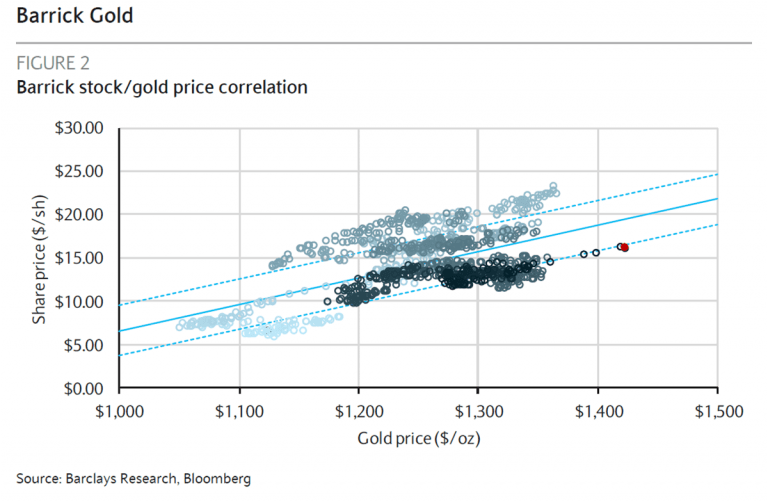 Gold prices have reached their highest level in five years, triggering a newfound excitement in the yellow metal, so what does that mean for gold stocks? One firm suggests gold stocks may not yet be pricing in the higher spot price for gold, so more upside could be just around the corner.

Barclays analyst Matthew Murphy and team said in a report this week that historical trends suggest gold stocks aren’t pricing in spot gold prices. Thus, they believe the market could start to inflate multiples “to the extent that gold prices can be sustained in the present range.” Multiple inflation could depend highly on potential improvements in each company’s growth prospects and free cash flow, they added.

Murphy and team notes that this method doesn't account for each company's changing fundamentals in areas like debt reduction and leverage versus the gold price. However, they would expect a move higher in gold stocks in general.

"Ideally companies would show a progressive movement to higher stock prices across a range of commodity prices (higher highs and higher lows)," they wrote. "Instead we have generally seen movement in the opposite direction; companies have derated. While in some cases this reflects value destruction we mostly attribute this to multiple compression…"

What about gold prices?

The Barclays team believes the main catalyst behind soaring gold prices has been the market's shift in expectations for interest rates and the related impact to the U.S. dollar. They also note that heightened geopolitical tensions have provided an additional boost. Thus, they expect the gold price to be influenced by economic data and "perceptions around global trade."

They predict the gold market will look next to news headlines from the G20 Summit and the next set of economic data, like the global manufacturing PMI numbers, which are due July 1, and non-farm payrolls in the U.S. on July 5.

Standard Chartered sees gold prices at $1,450 per ounce in the fourth quarter and cites many of the same catalysts as Barclays for spot gold.

Murphy and team plotted the stock prices against the gold price of some popular gold names. They found that many of the companies are trading more than one standard deviation below their historical trend.

The red dot on the charts shows where each company's current stock price sits against the gold price, while the darker points on the graphs indicate more recent data than the lighter points. Over the last 1,000 trading days, the highest price gold has been at was $1,366 per ounce on July 8, 2016, while the lowest price was at 1,051 per ounce on Dec. 17, 2015.

For example, they estimate that Barrick Gold Corp (NYSE:GOLD) is trading one full standard deviation below its implied price and at an 18% discount based on the historical correlation. However, they also say it's relatively in line with the trading range since the beginning of the year. They also point out that Barrick merged with Randgold, which added +1Moz to its annual production and formed a joint venture.

Kinross Gold Corporation (NYSE:KGC) is at a deeper discount of 25% and trading at two standard deviations below the price implied by the historical gold correlation. However, the company also faces increased risks due to political concerns in Mauritania, which caused the deferral of the Tasiast Phase 2 expansion and has been an overhang on its stock. 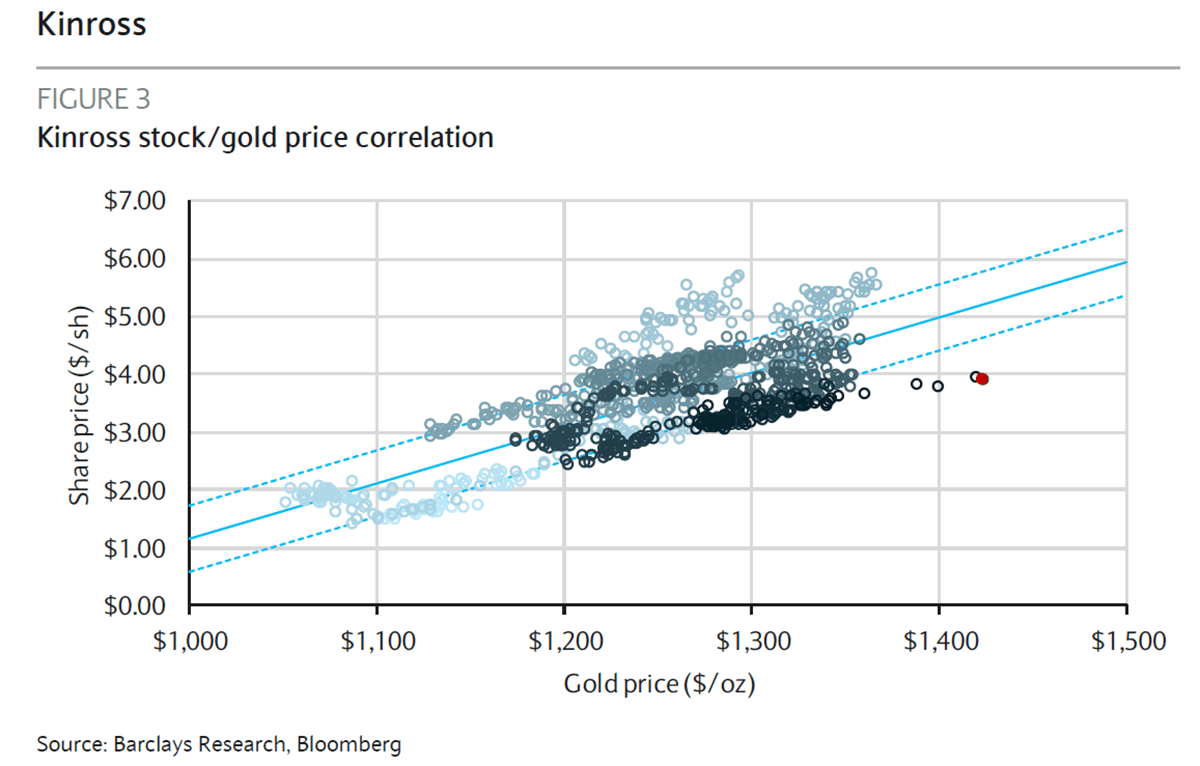 They also looked at Newmont Goldcorp Corp (NYSE:NEM), which they estimate is trading about two standard deviations below the price implied by the historical gold correlation and at a 19% discount. Following the Goldcorp acquisition, the stock is closer to in line with the trading correlation. However, they note that the company's recently acquired Goldcorp assets have struggled due to issues like the underground fire at Musselwhite. They do expect the recent setbacks to be resolved soon. 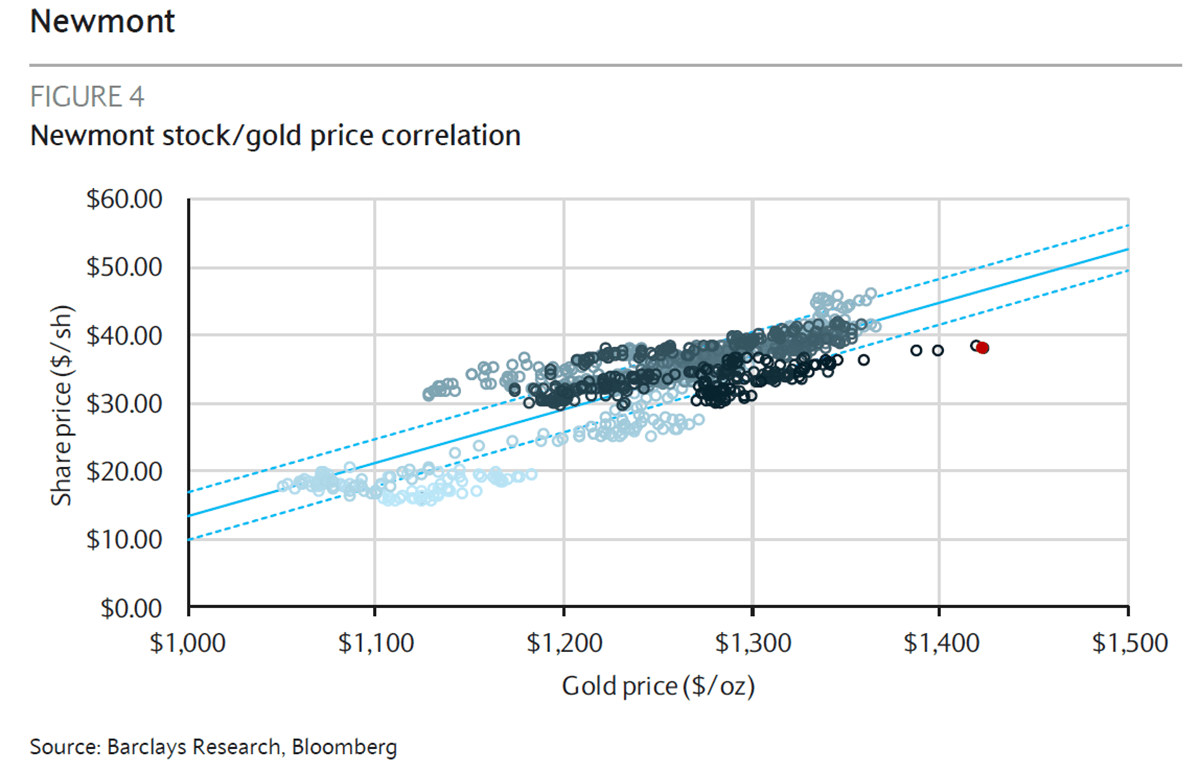