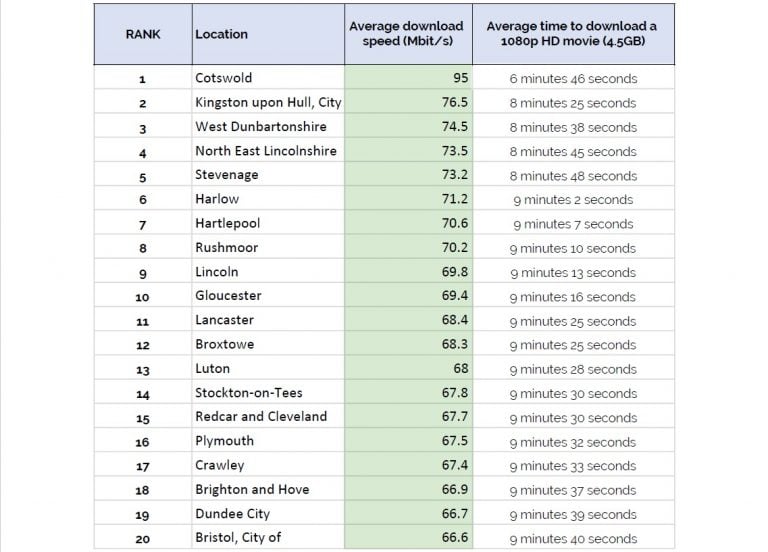 RS Components have collated Ofcom data to create an interactive graphic that reveals the best and worst UK cities for download speeds.

24th July 2019: Strong internet access is vital in 2019 in enabling people to do work, business and socialise online. RS Components have created an interactive map which reveals the UK cities with the fastest and slowest average download speeds, according to Ofcom data.

Good internet access is vital for a strong economy – for consumers, businesses and social media users, to name a few. In July 2018, it was announced that rural businesses and communities are set to benefit from improved broadband access as part of a £45 million boost by the government, through the Rural Broadband Infrastructure Scheme. The scheme offered grants to local authorities in areas where broadband services at speeds of 30Mbps or faster are not available or planned. But, despite these investments over the years, the UK is still struggling to bridge the gap between those with sufficient internet access and those without.

London has the slowest broadband service in the UK

In what may be surprising to some, the city of London has the slowest broadband speed in the UK, with an average download speed of 17.1 Mbit/s. This means, on average, it would take 37 minutes and 40 seconds to download an HD movie (4.5GB).

With the slowest internet in the country, London lags behind the remote Orkney Islands with 22.7 Mbit/s, Powys in Wales with 24.5 Mbit/s, Forest of Dean (25 Mbit/s) and even the Shetland Islands with 26.3 Mbit/s.

The Cotswolds have the quickest broadband speeds in the UK

The speediest broadband services in the UK can be found in the Cotswolds, where the average download speed is 95 Mbit/s and download times for an HD movie (4.5GB) are a full 30 minutes quicker than in the city of London.

Following closely behind is Kingston upon Hull with the second quickest broadband service, with an average download speed of 76.5 Mbit/s. West Dunbartonshire (74.5 Mbit/s), North East Lincolnshire (73.5 Mbit/s) and Stevenage (73.2 Mbit/s) all follow in the top five broadband services in the UK, ranging between 8-9 minutes download time for an HD film.

The annual report by Ofcom, as well as releasing updated broadband speeds in locations around the UK, revealed that superfast broadband coverage (relating to the availability of fixed broadband services with a download speed of at least 30 Mbit/s) has increased to 94% if homes and business – up from 91% in 2017.

However, despite this progress, the report found that 9% of UK landmass has no good 4G coverage from any operator. Whilst this has improved from 21%  in 2017, rural areas are still badly affected, and it is estimated that there are currently 39,000 homes and business that cannot access a decent fixed broadband service or get good 4G coverage.

Data: All data can be found here.

RS Components is the leading global distributor of electronic, electrical & industrial components for engineers, and has been supporting and inspiring generations of engineers since 1937.