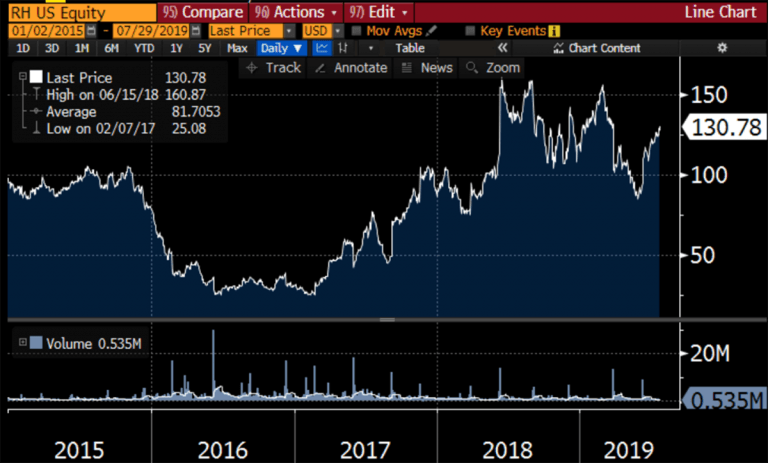 Richard Pearson of Moxreports is long Childrens Place Inc (NASDAQ:PLCE), he said in the report that the company’s stock could quickly spike back to $160. The entire market is grossly overbought, so the only place to find good stock picks is finding contrarian picks which everyone else got backwards. Mall-mageddon is a great place to find a few serious gems amid the rubble.

What is the bull thesis on on PLCE ?

Recent weakness among retailers has allowed Childrens Place to consolidate its leadership in children appeal, benefiting as its competitors are going out of business.  The company continues to report strong profits and cash flow, but its share price has been beaten up simply due to grim investor sentiment towards all companies in bricks and mortar retail.  The share price has recently fallen to multi year lows while the short interest has now spiked to over 44% of the float.

The company has been using its strong cash flow aggressively buy back shares, even as it continues to increase its chunky dividend payout each year.   As the market starts to distinguish Childrens Place from its fallen competitors nether the low share price nor the high short interest will be sustainable and a reversal is likely to be sharp.

Same question as Dillard's interview,  how can you be so bullish on a “bricks and mortar retail” play like Dillard’s?

The markets are trading the retail space as if it were an extinction, when in reality it is a shakeout of weak players.  The players who are nimble and under-levered are taking out the weak players, and are emerging with much more dominant as a result.  For the majority of retailers, "mall-mageddon" is a crisis.  But for the stronger players it is a golden opportunity to consolidate leading positions and put competitors out of business.  The demise of Sear’s and JC Penney gets lots of alarmist press. But it has been golden opportunity for Target to shake them out of the market. As its competitors go bankrupt, shares of Target have nearly doubled since 2017 and are hitting all time highs.  Within children’s specialty retail, Childrens Place is following the same trajectory.

How can PLCE compete with Amazon?

Childrens Place was an early mover into e-commerce which is why it is is thriving while its competitors keep falling into bankruptcy.  When CEO Jane Elfers took the helm in 2010, Childrens Place had online sales of roughly 9%.  But as of Q1 2019, online sales now account for nearly one third of total revenues and continues to grow.   Elfers realized early that it was possible (and in fact necessary) to work with Amazon rather than against Amazon.  Childrens Place began a partnership with Amazon in 2014 which has worked extremely well for both sides.

The number of company products sold through Amazon has increased from 300 SKUs to over 4,000 SKUs.    In the malls, Childrens Place is the number one player in the niche space children’s clothing specialty.  As such, it fits in nicely to Amazon’s past pattern of acquisitions of only the dominant players in very niche businesses, such as Whole Foods in the niche of groceries and Zappas the niche of shoe retailing.

What do you expect for upcoming earnings?

Like many retailers, the fiscal year end for Childrens Place is in early February, so its next quarter will be the August quarter.   Recent quarterly earnings were under pressure because over levered competitors such as Gymboree were going bankrupt and liquidating inventory.  The pressure on sales and the negative perception about the retailing space is what saw the stock get hammered down from $160.  But the fact is that the financial distress among its competitors is the best thing that could ever happen for Childrens Place.  The company is capitalizing on their weakness, using its financial strength to buy up their assets and IP out of bankruptcy.

In the short term there should be a very significant benefit, which the buy side has not yet fully figured out.  As many as 1,000 competitor doors have closed due to bankruptcies, with nearly 70% of these former competitors being in the very same malls as Childrens Place.  The weakness in the past 1-2 quarters was necessary, to chew through competitor liquidations.

As the birth rate in America continues to tank wont this hurt PLCE core business?

If the business remained fragmented, then this might have been an issue over the next 5-7 years.  But now that the company consolidated the businesses of the second tier player, it owns a much larger slice of the pie than it did just 1 year ago.  Childrens Place still has tremendous room to grow this business, even as the share price is assuming that the business is floundering.

How important is the aggressive buyback plan?

Even without the buyback plan, the share price would be set up for a significant bounce from its current levels around $100.  The share price is deeply oversold, even as the business is showing signs of a sharp rebound and even as the market ignores its consolidation of the former competitors.  But the aggressive share buyback means that a rebound likely happens sooner and sends the share price a good bit higher than would otherwise be the case.  Childrens Place has been buying back 1-2 million shares like clockwork every year, even at prices north of $150.

They are conducting the buyback with internally generated cash, not with debt, such that this boosts all financial metrics (and the share price) without creating strain on the balance sheet.  This works great on the fundamental side. On the trading side, the float is about to fall below 15 million shares, down from 22 million a few years ago.  As a result, the buyback ends up exacerbating the short position while also making it much more likely to see significant short squeezes, like the one that recently sent Dillard’s (DDS) up by 44% in a few weeks.

There are a lot of names on the short side, how big is the float and what are they getting wrong?

Short sellers are clearly missing the business dynamic as the company topples its competitors, but they are also missing a very important trading dynamic. As short sellers doubled down on the sector-wide “mall-mageddon” in 2019,  the short interest in Childrens Place grew from 2.5 million shares to 6.7 million shares.  But even in the face of rising selling pressure, the share price has been steadily climbing from its lows in the $80s.  The short interest is already at 44% of the float, which is simply not sustainable.  But it is very likely that the constant bid under the stock in recent weeks is actually the company buying back even more shares, taking advantage of the price weakness while it is below $100.  The company has historically been a buyer of its stock even at prices north of $150, but when the price dips, it then accelerates the purchases in a meaningful way.

The amount of these purchases does not get disclosed until earnings come out. At that time, investors will see the results of the stronger business amid less competition.  These stronger results will then be applied to a much smaller share count, sharply amplifying the effect on the share price.  And on top of that, the short interest will now comprise a much larger percentage of the reduced share count.

In the past, I have identified nearly identical  setups behind retailers such as Dillard’s and Restoration Hardware, which then quickly soared by 50-100% as the street figured out the painful math oversights.   I continue to believe that the improving competitive position and lower share count should see Childrens Place easily reclaim the $160 level where it was at the end of 2018. The short interest will make this happen sooner and perhaps send the share price higher if a true squeeze unfolds.

What is the catalyst for the next big move upward?

The most obvious catalyst is earnings which will be announced at the end of August.  But there are a number of less visible catalysts that could take hold much earlier, similar to what we recently saw with Dillard’s.  The most obvious catalyst for Dillard’s was also earnings which will be announced in August.  But as the market started to re-evaluate the upside and downside of the trade, short sellers began to unwind causing the price to raise by about 15%.  This appears to have triggered stop losses or margin calls, which then sparked further buying, briefly sending the stock up by more than 40% in a 1 week period.  So the hard catalyst for Childrens Place is likely to be earnings in September. But I suspect that by the time we get to earnings, the share price may already by up by 20% or so from current levels.