At over $12,000, Bitcoin (BTC) has more than tripled in value this year garnering renewed attention from the investment community, mainstream media, and the general public after a dramatic 1,700% rise (and subsequent fall) in 2017/2018.

Our position is simple: while the technology underlying digital currencies (known as Blockchain) may be a compelling platform, we believe the industry lacks an effective way to value the Bitcoin itself which, coupled with implementation challenges make it difficult to justify an investment. 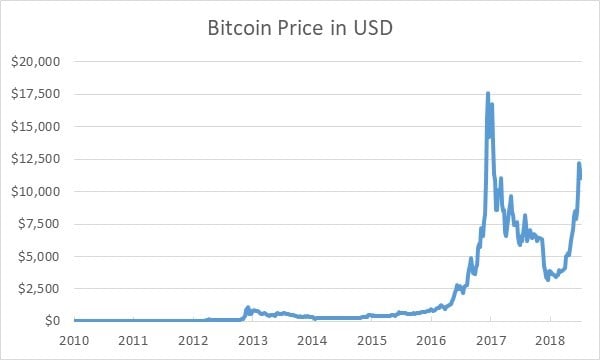 Launched in 2009, Bitcoin was the first of now many cryptocurrencies to be introduced.  A cryptocurrency is a digital or virtual currency – created and held electronically – that uses encryption technology for security.   Bitcoin uses a platform known as Blockchain to create an online ledger of every transaction ever conducted using the currency.  Blockchain provides a permanent record of all transactions that is basically impossible to delete or modify and it does so without a central data repository – no single institution or government controls the decentralized network supporting Bitcoin.  In fact, the Blockchain network itself ensures that transactions take place as intended without the need to engage a middleman (like a bank) theoretically resulting in faster and cheaper transactions that can be executed anonymously.

Based on our research and understanding of the space, there are two key points we want to convey: 1) Blockchain may indeed be a compelling platform with important future applications; and 2) that isn’t a good reason to exchange your dollars for Bitcoins today.

Bitcoin is intended to be a currency just like Dollars and Euros, although it does differ in that it is not backed by any physical asset or the full faith and credit of any government.  Like any currency, Bitcoin is just a representation of stored value.  In this regard, some have likened Bitcoin to gold – a commodity with finite supply and a price governed not by its utility, but by supply and demand for its representation of value.  If demand goes up so will the price.  If you own Bitcoin as an investment, your investment thesis would have to be based on an expectation for increased demand.  Over the last several years demand for Bitcoin has fluctuated significantly.  In 2019, demand for Bitcoin has spiked, as has the price, but will it continue? Why will it continue? And for how long?  If we can’t answer these questions with conviction, then we have no justification for the expectation of a price increase.

How Can One Price Bitcoin?

Every investment decision we make on behalf of our clients boils down to weighing potential risks against an expected reward.  In the case of Bitcoin, the risk is quite clear: its value can go to zero.  This is actually worse than gold, because physical gold would have some residual value even if it were abandoned as currency – i.e. you would still have a piece of metal.  So we know the downside, but what is the expected reward?  The answer requires we have a means for estimating what a bitcoin is worth and how that value relates to its current price.  The fact of the matter is that a Bitcoin is intrinsically worthless so how do we determine a fair price to pay for one?  With stocks, we can estimate future cash flows and discount them back to arrive at a present value, but there is no corollary for bitcoin – again, if demand goes up the price goes up, if demand goes down, the price goes down.  We’ve determined that we cannot reliably predict demand for bitcoin so how can we, in good conscience say that we think it’s worth anything other than what it is trading for right now?  It could be worth significantly more, or significantly less, but to express conviction in either would be disingenuous.

But wait, what’s the value of a Dollar?  In the absence of physical backing of the gold standard isn’t its intrinsic value technically equal to its utility as a piece of paper?  Well, yes and no.  Unlike Bitcoin, the Dollar is backed by the full faith and credit of the US government.  Additionally, the Dollar is priced daily both formally via foreign exchange rates and informally via what you can buy with it.  Lastly, and this is an important distinction, we don’t view dollars as an investment.  As US citizens, we don’t hold dollars (cash) in a portfolio in anticipation of price appreciation – in fact it’s fundamentally an expression of a decision not to invest, or a view that other asset classes might lose value.  On the contrary, trading dollars for Bitcoins expresses a view that the value of the bitcoin will increase.

So from an investment perspective, allocating a portion of client portfolios to Bitcoin would mean taking on considerable risk, with little more than the hope of profiting from changes in market price.  This is the definition of speculation and doing so would run counter to our investment philosophy and discipline.  Further, we couldn’t buy bitcoin for our clients even if we wanted to – not efficiently anyhow.  The very structure of the decentralized network and Blockchain dictates that you can’t put Bitcoins in your bank account.  We could own them synthetically using futures contracts, although exchanges are requiring 35%-40% margin, reflecting Bitcoin’s volatility – by contrast margin required on an S&P 500 contract is just 5%.

Another option would be to purchase shares in a Bitcoin fund or unit trust – though the problem with these vehicles is that the price you pay greatly exceeds the net asset value underlying the fund.  For example, in 2019 shares in the Grayscale Bitcoin Trust (GBTC) have traded at a 26% premium to the underlying bitcoin represented in the fund. From an individual perspective, you can also opt for a crypto trading bot like Bitcoin Superstar to invest in Bitcoin and make a profit for minimal investment.

We’re not saying the price of bitcoin won’t go higher from here.  Realistically, it could go much higher, but we aren’t willing to make what we view as a speculative bet even if there was an efficient way for us to do so.  For those who seek to invest in Bitcoin independent of Greenleaf Trust, our advice would simply be to do so with a clear understanding of the risks involved.  Be thoughtful about your allocation size so as not to risk what you can’t afford to lose carefully evaluate the investment vehicle you choose if you do not purchase Bitcoin directly.

We acknowledge that the Blockchain technology underlying digital currencies like Bitcoin may be a compelling platform with a host of applications, but trading dollars for Bitcoin itself in hopes that demand increases and the price appreciates is speculative at best.  In the absence of a reliable way to value the currency, allocating a portion of our assets to Bitcoin would be undisciplined and inconsistent with our investment philosophy.

As vice president and director of investment research at Greenleaf Trust, Nick creates comprehensive investment solutions to help clients reach their financial goals. He is the chair of the investment committee, responsible for portfolio-level investment decisions and outcomes. Nick joined Greenleaf Trust in 2012 from Robert W. Baird & Company. He holds a bachelor’s degree in business administration from the University of Michigan Ross School of Business. Nick is a CFA® charterholder and a member of the CFA® Institute.