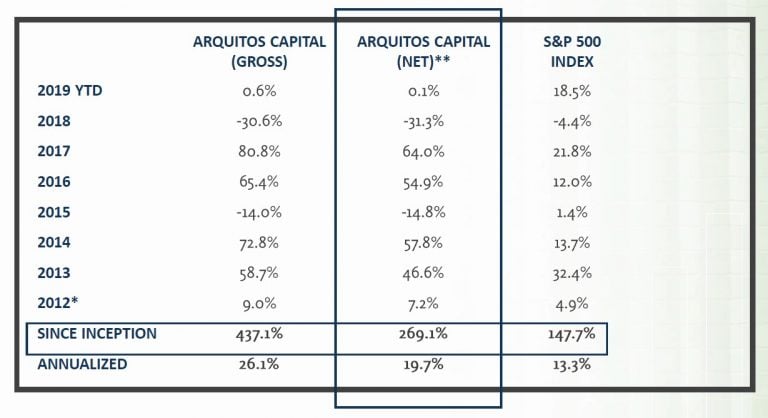 Be curious, not judgmental. – Walt Whitman

Arquitos returned -5.1% net of fees in the second quarter of 2019, bringing the year-to-date return to 0.1%. Our annualized net return since the April 10, 2012, launch is 19.7%. Before fees, Arquitos has returned 437% cumulatively and 26.1% annually since our launch seven years and three months ago. Please see page five for more detailed performance information.

We will be holding our annual meeting in New York City on Tuesday, September 17. Current investors will be receiving invitations with additional details shortly. We will also have a limited number of seats available for prospective investors. If you are a prospective investor and are interested in learning more, please let my colleague, Jessica Greer, know.

A little more than 35 years ago, in 1984, Warren Buffett gave a famous speech entitled, “The Superinvestors of Graham-and-Doddsville.” He highlighted nine funds that followed a value-investing philosophy and that were led by managers he personally knew. Four of them had worked at Graham-Newman, Ben Graham’s investment firm, from 1954-1956. Two were multi-manager pension funds that Buffett directly influenced. This speech was a rebuttal of the efficient market hypothesis and was presented at the 50th anniversary of the release of Ben Graham and David Dodd’s “Security Analysis.”

Buffett has never stopped advocating for active management for managers who apply value-oriented principles even though he urges the average investor to simply invest in index funds. Why the apparent contradiction? Two reasons: high fees from underperforming active managers eat into returns; and, he has seen how unavoidable volatility in actively managed funds causes some emotional investors to add and withdraw money at inopportune times.

To that second point, studies have universally shown that the performance of the average investor significantly trails the instrument in which they are invested. The issue is poor decision-making associated with subscriptions and withdrawals. The best advice that Buffett, or other active managers, can give is for investors to buy and forget, whether it is an index fund or an actively managed fund. Studies have shown that simply buying and forgetting saves investors about 5% per year in performance.

Back to Buffett’s speech. There are several interesting takeaways from reading the speech today. The managers from the nine funds cited had a similar philosophy but applied it in much different ways. Walter Schloss and Tweedy, Browne were highly diversified, for example, whereas Charlie Munger was highly concentrated. Some of the investors used leverage; others did not at all. A few were focused on small companies. Others, like Bill Ruane, preferred larger companies.

The shared philosophy was a bottom-up, fundamental approach. Each of the managers “search[ed] for discrepancies between the value of a business and the price of small pieces of that business in the market.” These managers were not chosen by Buffett at random and were not chosen after the fact. There was no survivorship bias here.

Another interesting aspect is just how small some of these funds were even with the compounding from their performance. For example, Walter Schloss in 1984 only had $45 million under management despite returning 21.3% annually over 28 years. In today’s dollars, that $45 million is still only $111 million.

Most people know Charlie Munger as Warren Buffett’s 95-year-old sidekick at Berkshire Hathaway. He managed one of the nine funds on this list. From 1962-1975 he returned 19.8% annually. When he closed his fund in 1975, assets under management were only $12 million. That’s only $57 million in today’s dollars.

Even Buffett himself only had $100 million in assets under management ($700 million in today’s dollars) when he wound up his fund in 1969. This despite returning 29.5% annually with no down years.

Obviously, the hedge fund world is much, much different today than 5o years ago when these performance records were made. However, there is a group of portfolio managers over the past 20 years who, like me, were inspired by the Buffett Partnership and other funds like Munger’s. We changed careers to start a fund because we knew we could successfully apply these principles. It is interesting for us to look back at those nine funds that Buffett highlighted and marvel at how different the environment is, how our assets under management are not dissimilar, and how our performance stacks up.

Munger was highly concentrated. According to, “The Snowball,” by Alice Schroeder, Munger at one point put the entire portfolio into one company, British Columbia Power, which was being taken over by the Canadian government. In 1974, two holdings made up 84% of the portfolio.

Many people don’t know that Munger also took control of several public entities through his partnership. He controlled Blue Chip Stamps, which was later folded into Berkshire Hathaway. He also controlled, with Rick Guerin, a closed-end fund named New America Fund. Blue Chip Stamps made up 61% of Munger’s portfolio in 1974. Investors would be shocked at that level of concentration today.

Close followers of Buffett and Munger know that Buffett’s partnership was also heavily concentrated and, of course, he took control positions (sometimes in private companies) through his fund. This includes allocating 25% of the fund to Berkshire Hathaway in 1967 and 40% of the fund to American Express in the early 1960s.

I have received questions through the years about the unusual makeup of the Arquitos portfolio. We have heavy concentration at times. We have a control position. We have, on occasion, invested in some very small companies, and we have invested in “work-out” situations. In the context of today’s hedge funds, most of which focus on asset gathering and not performance, this approach may seem strange or unique. However, the approach I take through Arquitos fits in very well when you look at the activities from the Buffett Partnership and the funds run by Charlie Munger, Rick Guerin, and others.

My experience is that the only way to generate high returns over time is through concentration and by doing the activities that we do. Arquitos has always been highly concentrated, though not nearly to the degree that Munger was. Since our beginnings in 2012, the top five holdings have typically made up 75% of the fund. There have been times where, through appreciation, a holding has been as large as 40%.

Currently, our holding in MMA Capital makes up 39% of the fund (much of it through appreciation). This is a position that I think can safely grow at 30% per year over the next five years.

We have seen some gains from MMA Capital being added to the Russell 3000 index. The stock continues to trade below book value, though, and it has now transformed itself into a company that reliably throws off a significant amount of free cash for its market cap. The index inclusion will eventually allow it to reach fair value. In the meantime, we hope that management continues to buy back shares below book value.

Our position in Enterprise Diversified makes up another 25%. This position has been the source of the portfolio’s pain in the last 18 months. Long term, though, it has the potential to be our best-performing company. I am unlikely to make additional allocations to the company through Arquitos, but I am so confident in the future of Enterprise Diversified that I have personally been buying shares on the open market when I have been eligible to do so. I have personally purchased shares at prices 15% higher than today.

Being concentrated is the safest way to gain significant outperformance over time if we don’t use margin leverage, which we don’t. But, in order for investors to enjoy those big years, they have to also be able to endure down periods. An investment in Arquitos requires commitment. I asked that of each investor when they entered the portfolio. As a group, you have upheld that commitment with only a few limited exceptions.

I regularly tell you to ignore your monthly statement, and I want to take this opportunity to reiterate that. Following performance for that short amount of time only leads to unnecessary, heightened emotions. Most recently, for example, we were up 7.2% in June after being down 7.7% in May. If you follow your performance statement that closely, you may ascribe some sort of meaning to those numbers. That would be a mistake. Nothing meaningful that would affect the long-term performance of our companies occurred during those two months.

To further illustrate the meaninglessness of those monthly numbers, the fund has existed for 87 months. Performance has moved up or down by at least 5% in 34 of those months. That means a meaningful performance move occurred nearly 40% of the time. Something meaningful enough to make a buy or sell decision occurred with the operations of our holdings in only a handful of those months.
My commitment to one of our holdings, such as MMA Capital or Enterprise Diversified, is forged over years. My opinion is unlikely to change based on one piece of news or a short-term operational issue.

I continue to see tremendous value in our holdings. Valuations continue to be cheap, and each of the companies we own continue to transition into strong free cash-flow generating companies. Those transitions bring new investors and more appropriate valuations over time. We have seen it occur throughout the history of Arquitos and must remain patient as this process takes shape in our current holdings.

Thank you again for your investment in Arquitos and for your commitment. I hope to see you in September!