Canadian loyalty and travel consolidator Aimia Inc (TSE:AIM) may be heading into a tumultuous chapter, after several large shareholders raised concerns about the upper echelon’s conduct at the last annual meeting on June 28. The key reason for the antagonism is Aimia Inc management’s use of proxies for Mittleman Brothers’ 27 million shares, or 23%, as part of a settlement agreement from 2018, under which the investor agreed to support the incumbent board in exchange for a board seat.

The standstill expired on July 1, two days after the meeting. Yet without the support of Mittleman, none of the six directors would have received a majority of the votes, bar Mittleman’s nominee. Mittleman said the company should “not assume continued support” with the termination of the standstill and expressed sympathy to the same concerns raised by a group of shareholders led by Charles Frischer, who said he has never seen a chair treat shareholders “so arrogantly and dismissively at a public company meeting” in his 20-year career as an asset manager.

Among others, Frischer said Chairman Bill McEwan refused to hold a ballot on the adjournment of the annual meeting, did not allow shareholders to ask questions, and even permitted security guards to "intimidate shareholders." According to Frischer, the meeting was terminated abruptly without a vote once shareholders started to raise concerns about McEwan’s conduct.

In an apparent attempt to soothe shareholders’ worries, Aimia Inc added two new directors, bringing the number of board members to eight.

Muddy Waters Research has launched a series of negative reports targeting Hong Kong sportswear retailer Anta Sports. The research outfit led by Carson Block contended that Anta manipulates its profitability by “secretly” controlling its distributors, which the company claims are independent. Muddy Waters published four reports over the course of seven days and plans to unveil several more. Anta issued a few boilerplate statements in which it deemed the reports “inaccurate and misleading.” Still, the market seems confident; Anta stock declined less than 5% since the short seller published its research.

The number of U.S.-based consumer goods companies to have been publicly subjected to activist demands between January 01 and July 12 in respective years. 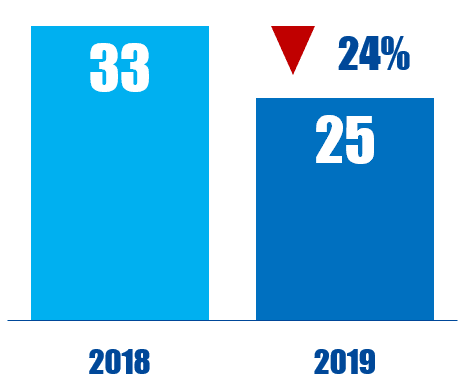